The limbic system and reticular formation are networks of neurons that function together even though they are widely separated.

The limbic system is the “emotional brain” made of deep gray matter structures linked together by the fornix.  The fiber tracts have the appearance of oval fibers and looks like the corpus callosum but it’s not the same.  The limbic system also includes certain structures of the diencephalon: the anterior thalamus and hypothalamus.

The hypothalamus in the middle of all this stuff has a direct between fearful stuff, memories and the autonomic nervous system.  It’s a very strong anatomical connection. 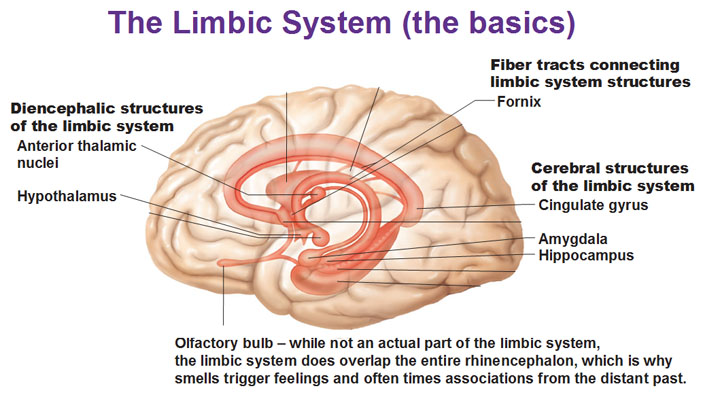 The amygdala (fear and its sympathetic response) and hippocampus (form and retrieve memories) reside very close together.

This is called the reward circuit because when studies were done with rats and were provided with pleasure, they would actually neglect their babies to the point of death.  We are hardwired for fear and pleasure.

The reward circuit includes the prefrontal cortex which includes judgments, habits, and behavior.

Because the limbic system output passes through the hypothalamus and reticular formation, it in turn controls visceral responses.  Therefore severe emotional stress can easily lead to visceral disorders.

Runs through the central core of the brainstem with connections throughout cerebral hemispheres. It is made up of ascending and descending fibers. It plays a big role in filtering incoming stimuli to discriminate irrelevant background stimuli. The Reticular Activating System (RAS) is made up of the reticular formation and its widespread connections. It maintains consciousness and alertness and functions during sleep and arousal from sleep. 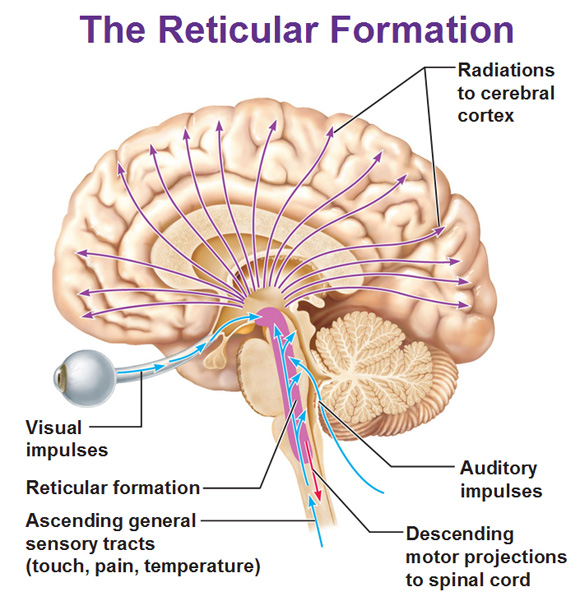 In this day and age most people are working from home and struggling to find the balance between stagnation and moving to stay fit. This program was developed … END_OF_DOCUMENT_TOKEN_TO_BE_REPLACED

I've created this hip flexibility program for those that would like to improve their flexibility in an efficient manner, with a follow along video that only … END_OF_DOCUMENT_TOKEN_TO_BE_REPLACED

Looking for a simple and straightforward bodyweight-oriented strength training routine that doesn't take too much time? You're not the only one! A survey I … END_OF_DOCUMENT_TOKEN_TO_BE_REPLACED

I don't know about you but nothing gets me fired up more than working on my abs. It's a unique muscle group that is utilized in every exercise and making it … END_OF_DOCUMENT_TOKEN_TO_BE_REPLACED

This training routine is focused largely on increasing strength and muscle mass (aka muscular hypertrophy). If I had to sum up the routine in one fell swoop I … END_OF_DOCUMENT_TOKEN_TO_BE_REPLACED

For those who have poor flexibility, tight hamstrings and want a simple program that will help them to get looser in a gentle, non-painful manner. In this … END_OF_DOCUMENT_TOKEN_TO_BE_REPLACED

This is for anybody who wants to get strong and have fun with a gymnastics-inspired routine. It is highly bodyweight-exercise oriented (no external weights) and … END_OF_DOCUMENT_TOKEN_TO_BE_REPLACED

I have three premium flexibility programs that I offer and many of you have been clamoring for a bundle-package, so here it is! You could now buy the … END_OF_DOCUMENT_TOKEN_TO_BE_REPLACED