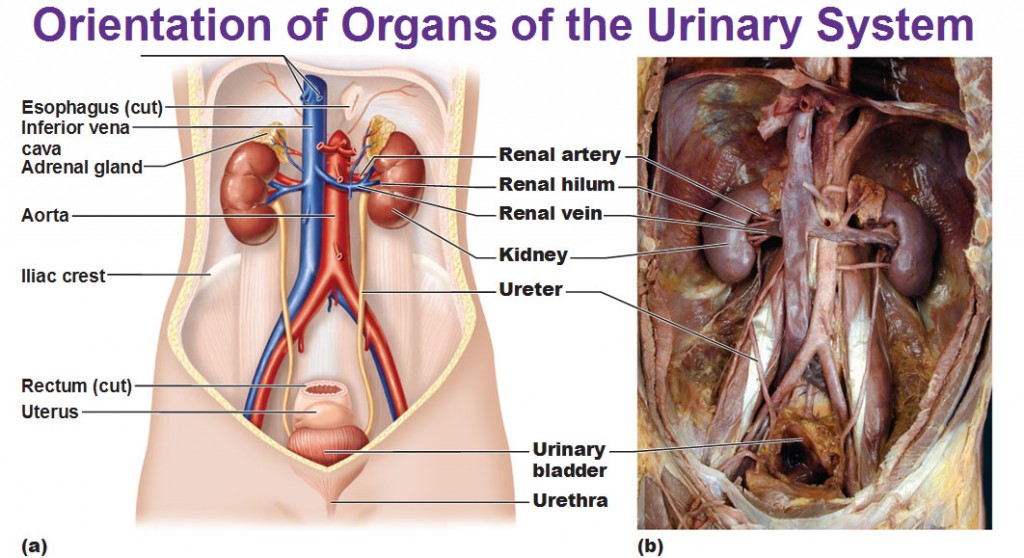 Above: Here’s our orientation of the urinary system, they’re not too many but it’s all important.  Note the kidneys with the tubes called ureters draining on each side which travel down and connect to the urinary bladder. 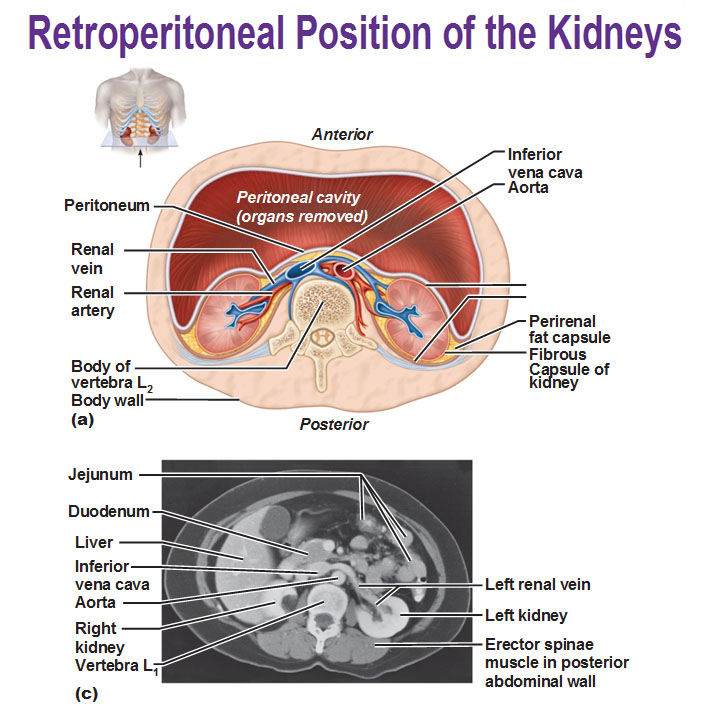 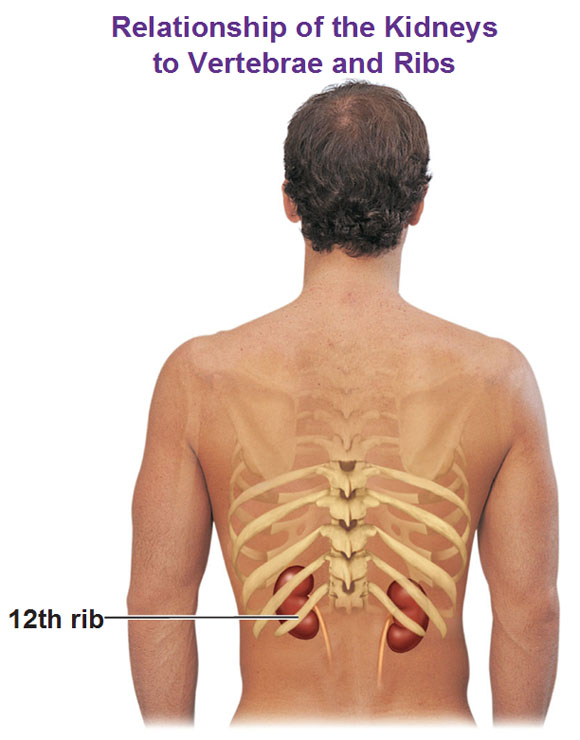 Above: We see they are tucked up just inside the last two ribs, so they get some protection from the last two ribs which isn’t a great deal of protection but that is why there is a lining of fat, even if someone is a very skinny person, all around the kidney. 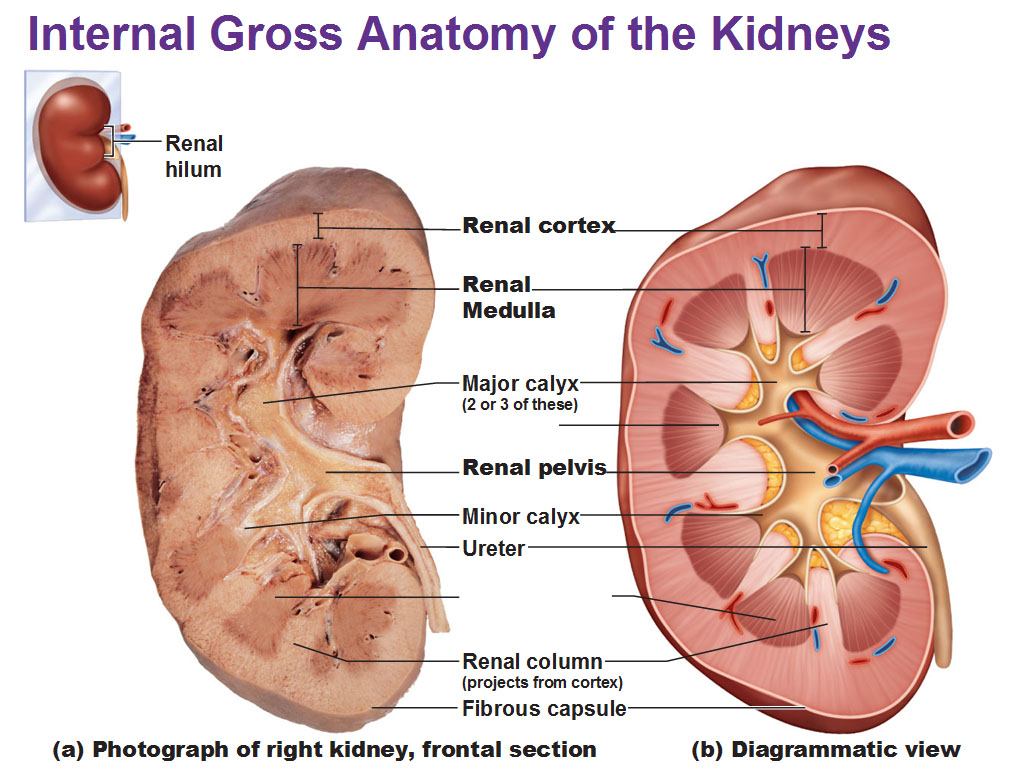 Above: If you slice a kidney and take off the front part, this is what it looks like.  The outer layer is called the renal cortex.  The inner layer that includes the triangle shapes (renal pyramids) is the medulla.  You’ve seen this pattern of the cortex and medulla before such as in the brain and the adrenal glands.  The triangle shapes are actually called renal pyramids.  These pyramids look like they are draining all together into the calices (major calyx).  These drain into this funnel called the renal pelvis which then drains into the ureter.  We’ll also have our supply of blood coming in at this red vessel and blood coming out of the blue one. 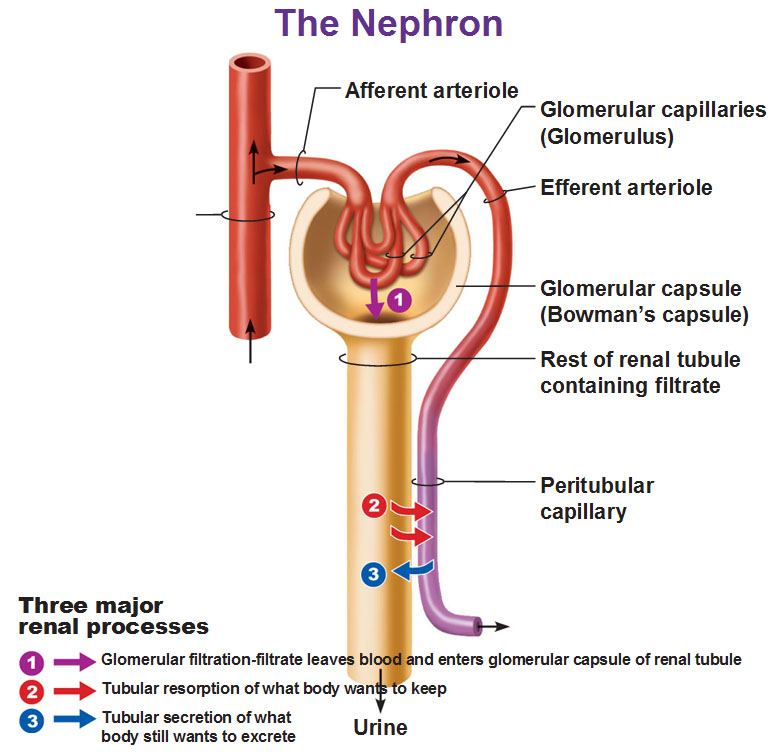 Above: This structure is called the nephron. This is the structural and functional unit of the kidney.  We have an arteriole coming in (a very small vessel before a capillary) that is going to branch into a capillary bed.  This particular capillary bed is going to take on a special shape that looks like a tangled up ball shape called the glomerulus.  These are made up of fenestrated capillaries.  The afferent arteriole means it brings blood into the glomerulus made up of fenestrated capillaries made of holes.  Then we travel outward and this is the major difference in the capillary bed.  Normally in a capillary bed we have a venule but in this case, functionally we aren’t dealing with the exchange of oxygen and carbon dioxide, this nephron is built specifically for filtration of our blood to remove the nitrogenous waste and balance out the salt and what not.  So, exiting this glomerulus is not a venule but another arteriole.  Because it’s leaving this is called an efferent arteriole.

The cup shaped thing that surrounds the glomerulus is called the glomerular capsule (This used to be called bowman’s capsule.  There has been a trend for the past 15-20 years that names are being replaced by scientific names rather than names of people who discovered them.)  This glomerular capsule is going to drain into the renal tubule. 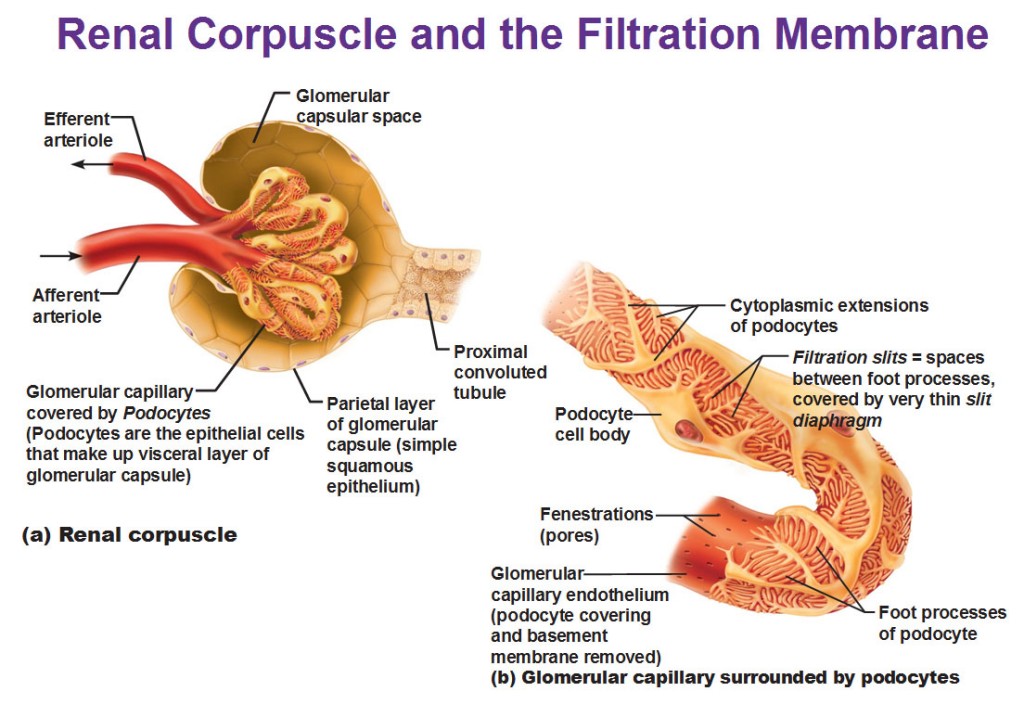 Above: Now we see an extreme close up of the renal corpuscle which is just the glomerulus and glomerular capsule that we just talked about.  On the left we see our glomerulus with our arterioles.  The one on the right is a very detailed look at the fenestrated glomerular capillaries with the holes.  Remember on any capillary there’s a basement membrane on the outside.  In the kidneys, this basement membrane takes on a very specific structure.  It looks like things are sticking out into other things that are sticking out rather than a flat membrane.  These things sticking out are called podocytes and then we have foot processes sticking out of these podocytes.  That’s a lot of effort and complicated because the kidneys are the most complicated stuff in physiology that you’ll come across.  If we have a complicated structure then we have a complicated process.

The capsule is actually made up of simple squamous epithelial cells and there’s space in between the capillary with its specialized basement membrane and you see this capsule drains away into a proximal convoluted tubule where the cells become cuboidal. 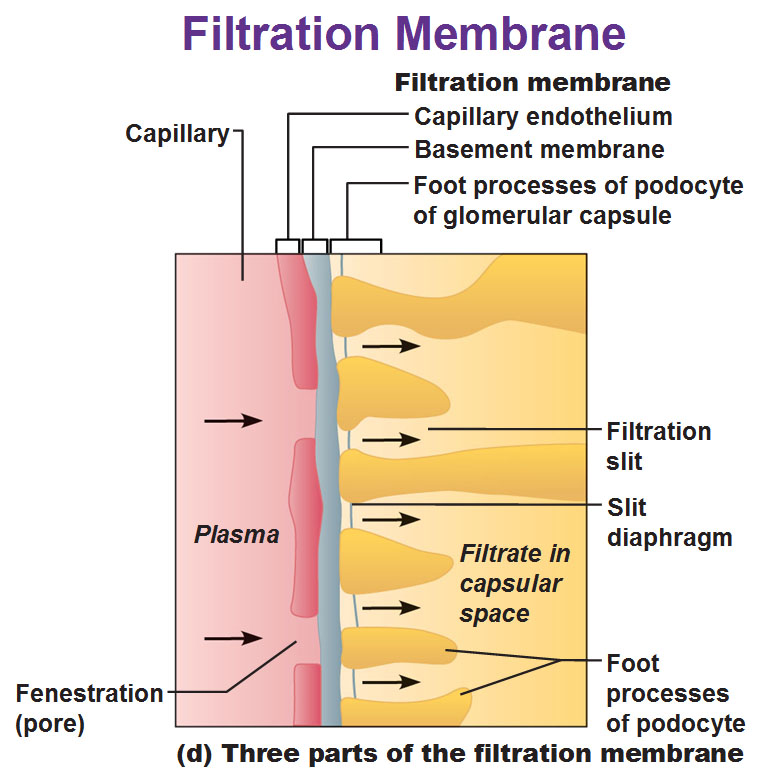 Remember when we talked about the lungs and the alveoli and their capillaries and we had a respiration membrane?  This is a similar idea where two surfaces come together and create a specialized membrane where gases are exchanged.  In this structure we’re going to allow an incredible amount of volume to pass through this membrane very quickly.  Even though we want it to pass through quickly we still want control over it, so that’s why we have this membrane over it.  We have the fluid in the blood called the plasma and you could see the holes in this picture are the pores of the fenestrated capillary.  There’s a little strip of basement membrane and the yellow things sticking out are the podocytes that are cut into a cross section.

Because of these podocytes, we have more spaces for things to pass through.  It’s a series of spaces for letting plasma pass through.  The stuff that will be able to fit through the holes are water, ions, glucose, amino acids and urea.  The things that are going to be too big to pass through are mostly your proteins (things in the blood like albumin, globulins, etc).   The renal tubule (the collection tube from the globular capsule) is going to accept all the fluid from that membrane and once it goes in the tubule it’s called filtrate.  Then we’re going to have a bunch of different sections to this tubule. 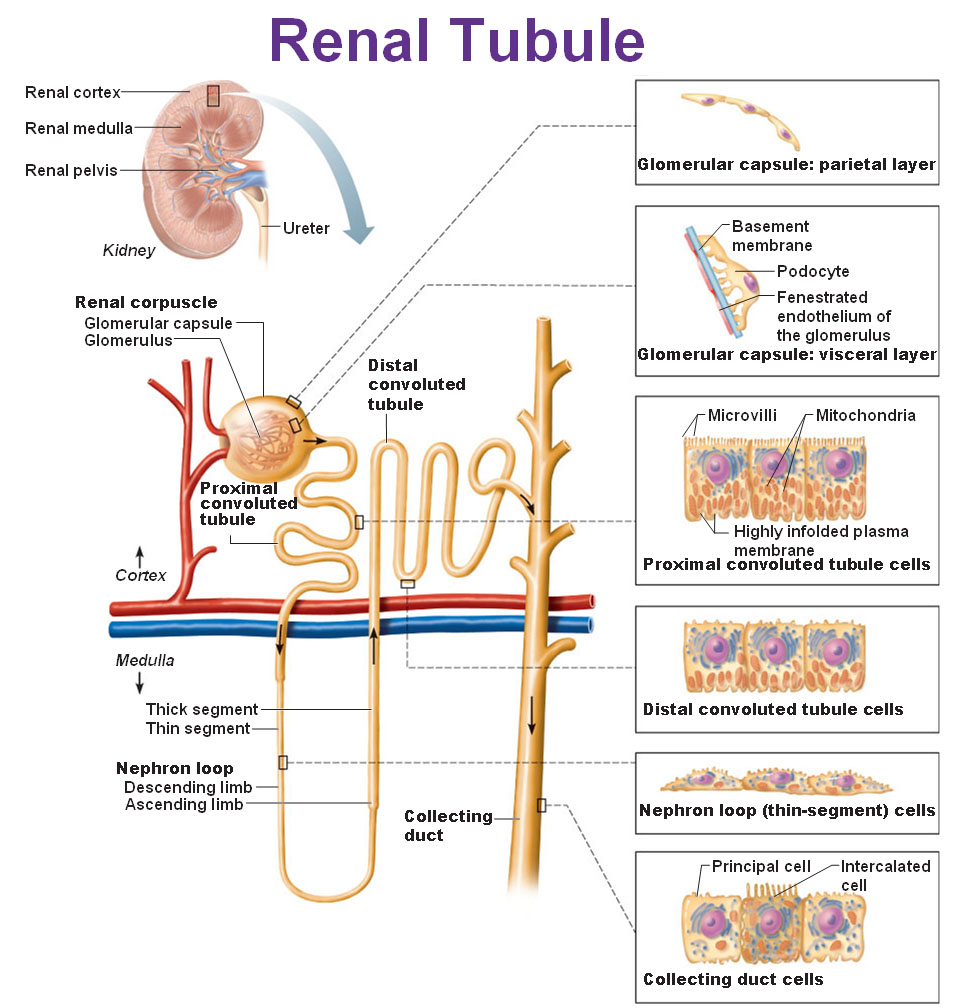 Above: We take a slice of a kidney and blow it up to this level.  We go in to the globerulus collecting the filtrate and direct it into the tubule.  As you could see in this picture the tubule is very, very long.  There’s different sections to it that take on different arrangements or shapes to it.  Proximal to the whole (proximal meaning close) section is very curvy, so it’s called the proximal convoluted tubule.  Then we dip down into the medulla (meaning deep) and this forms a loop.  This loop is conveniently called the nephron loop that’s made up of the descending limb and ascending limb.  We go up to the cortex and we see more convoluted stuff that is further away now, so it’s called the distal convoluted tubule.  Then this distal convoluted tubule is going to dump into the collecting duct which will eventually drain into the calices and into the ureters.

Above (right side): On the right we have a bunch of cells that show what each section is made up of.  We’ve already discussed the parietal and visceral membrane (visceral always hugs the organ).  The proximal convoluted tubule cells contain microvilli that increase surface area.  The nephron loop contains microvilli but are more squashed than the convoluted cells.  The distal convoluted tubule cells are similar to the proximal in their cuboidal shape except there are far less microvilli.

These difference in cell types are a representation of their function.  Let’s backtrack into the globerulus capsule, where we have captured a ton of fluid: When this blood enters into this glomerulus which is a capillary bed, it’s entering it at a very high pressure and because of the shape of this specialized ball-shaped capillary bed, it has that end that juts out so when the blood needs to turn the corner, it forces the fluid out.  Conveniently we have the fenestrations so the pressure can quickly press the fluid out so you end up capturing a ton of fluid in that capsule.  As that plasma has a bunch of stuff in it, it has to make its way through the tubule and the kidney needs to figure out what to keep and let go.  In the proximal portion especially, because of all the microvilli, those cells can reabsorb a lot of water.  So let’s say the person is very dehydrated: As the kidney is taking in blood, it tries to conserve the water and this proximal convoluted tubule takes back a lot of water.  That’s what happens in these tubules: They keep, take back, return whatever the body needs.  If the situation was the other way around, such as if you were bloated or over-hydrated and you wanted to get rid of water, you don’t have to absorb that water.  The kidney monitors the water and salt balance and just lets the water to keep going and that water will work its way down eventually into the urinary bladder. 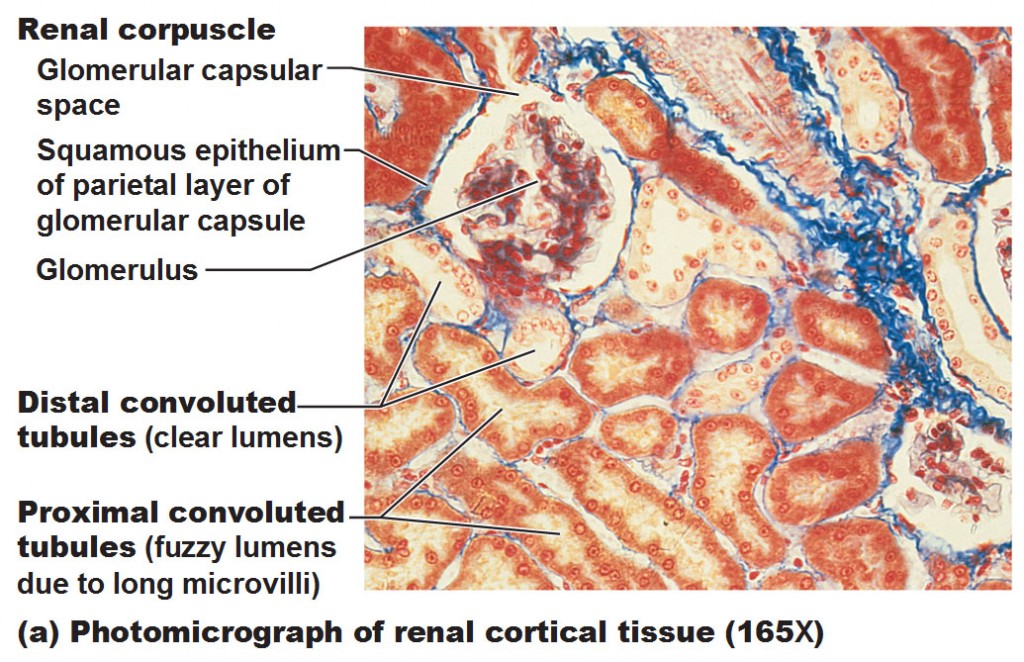 Above: If you were to slice through the kidney and stick it under the microscope, this is what you’d see.  You could see the glomerulus which looks like a bunch of capillaries organized into a ball.  The convoluted tubules look like a mess because you’ve sliced them. 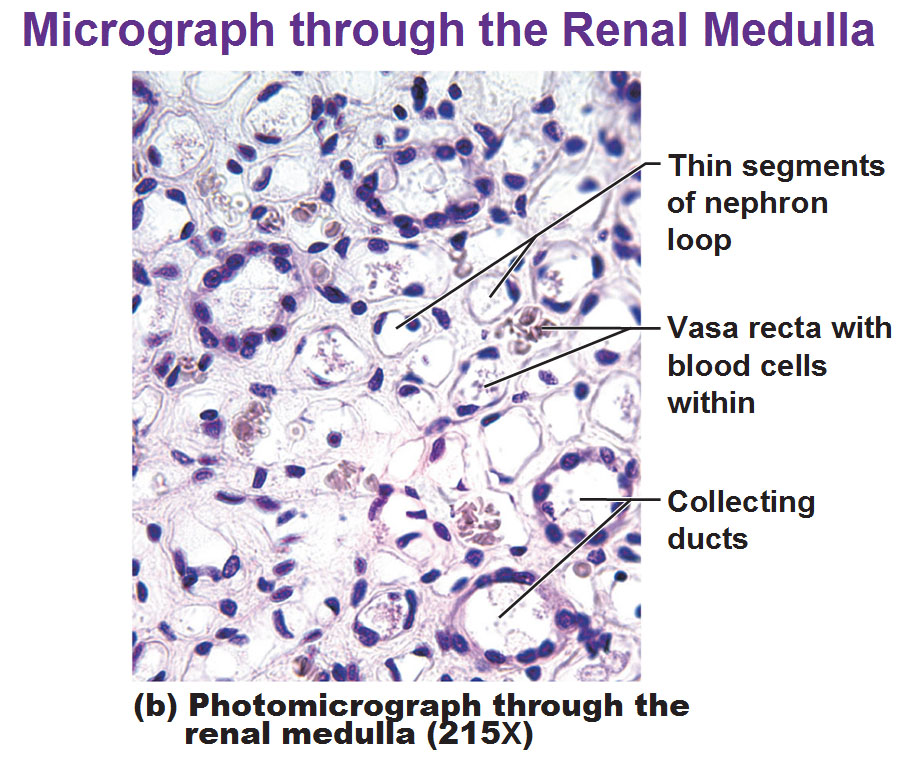 Above: Here’s another one that’s confusing as well because of that cross section.

Cortical nephrons (in the cortex) make up 85% of nephrons

Juxtamedullary (next to medulla) make up the other 15% and these have the special responsibility of concentrating your urine with the help of the vasa recta which we will look in detail soon. 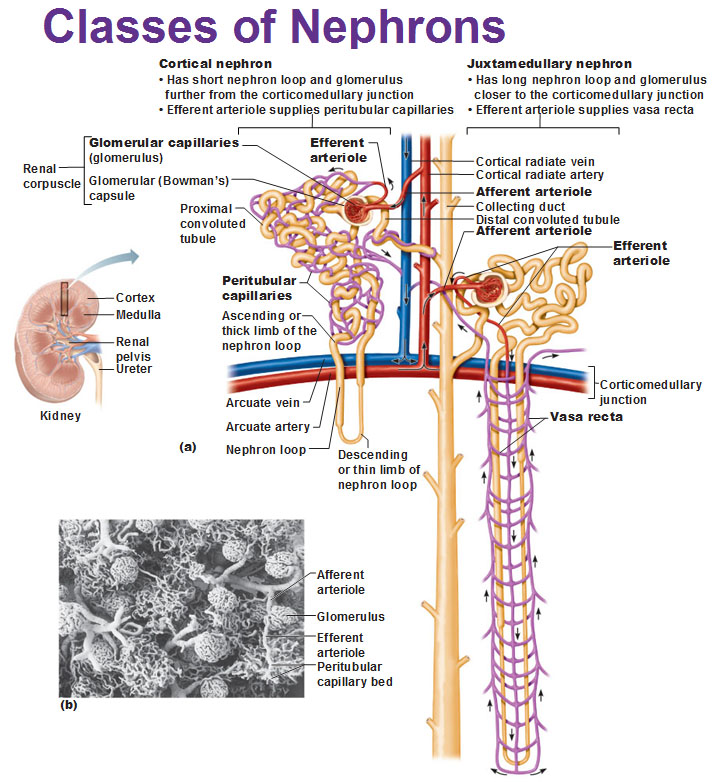 Above: The loop is pretty short in the cortical nephrons.  The juxtamedullary tubules have super long loops that go deep down into the medulla.  You could see a very large collecting duct (white) accepting fluid from the different nephrons (all the cut off branches are getting fluid).

So, isn’t it interesting that we have a capillary bed wrapping around those tubules?  What were the tubules doing?  Remember we said they could take back some filtrate (meaning absorb back into the body)  and those cells that have the microvilli made up of the tubules.  If we have capillaries against those tubules, we can let things go outside the tubules for the capillaries to pick them up which then lead to the veins.  So the peritbular capillaries keep the stuff that were absorbed by the tubules.  The vasa recta (vasa=vessel, recta=straight) are the purple capillaries that happen to surround the very long loop in the juxtamedullary nephron.  They are both low-pressure capillaries while the glomeruli deal with high pressure.

Fun fact: The filtrate that is produced by the glomeruli that isn’t kept becomes urine.  We produce  a liter of this fluid every 8 minutes.  99% of the filtrate ends up getting reabsorbed by the tubules.

For those who have poor flexibility, tight hamstrings and want a simple program that will help them to get looser in a gentle, non-painful manner. In this … END_OF_DOCUMENT_TOKEN_TO_BE_REPLACED

In this day and age most people are working from home and struggling to find the balance between stagnation and moving to stay fit. This program was developed … END_OF_DOCUMENT_TOKEN_TO_BE_REPLACED

This is for anybody who wants to get strong and have fun with a gymnastics-inspired routine. It is highly bodyweight-exercise oriented (no external weights) and … END_OF_DOCUMENT_TOKEN_TO_BE_REPLACED

I have three premium flexibility programs that I offer and many of you have been clamoring for a bundle-package, so here it is! You could now buy the … END_OF_DOCUMENT_TOKEN_TO_BE_REPLACED

I've created this hip flexibility program for those that would like to improve their flexibility in an efficient manner, with a follow along video that only … END_OF_DOCUMENT_TOKEN_TO_BE_REPLACED

Looking for a simple and straightforward bodyweight-oriented strength training routine that doesn't take too much time? You're not the only one! A survey I … END_OF_DOCUMENT_TOKEN_TO_BE_REPLACED

This training routine is focused largely on increasing strength and muscle mass (aka muscular hypertrophy). If I had to sum up the routine in one fell swoop I … END_OF_DOCUMENT_TOKEN_TO_BE_REPLACED

I don't know about you but nothing gets me fired up more than working on my abs. It's a unique muscle group that is utilized in every exercise and making it … END_OF_DOCUMENT_TOKEN_TO_BE_REPLACED