Let’s start with the Skull… the worse part.. I mean, the most complicated of all the bones we will go over…  The skull contains an astounding 85 openings in the form of foramina, canals and fissures.  They provide passageways for the spinal cord, blood vessels, 12 pairs of cranial nerves and so on. 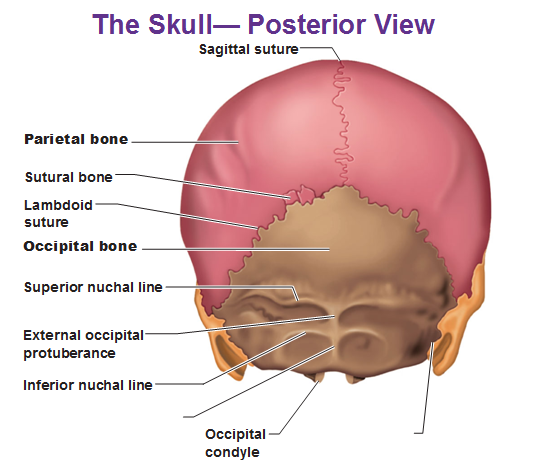 The parietal bone is actually 2 separate bones that got fused together with the sagittal suture.  It’s easy to remember sagittal cause of the mid-sagittal plane that runs right in the middle of you that splits you symmetrically. The sutures are not fused in babies to allow for the brain to grow.  The lambdoid suture is named after the greek letter Lambda because it looks like the letter coming off the sagittal suture: λ

The occipital bone is the back that goes down.  The word nuchal refers to the neck/nape.  So we have the superior and inferior nuchal lines, those are pretty easy.  The external occipital protuberance is literally just the protrusion between the nuchal lines.  The occipital condyle is easy to remember if you know that a condyle is a rounded projection (like a process) that ligaments attach to.  Condyle in latin means “knuckle.” 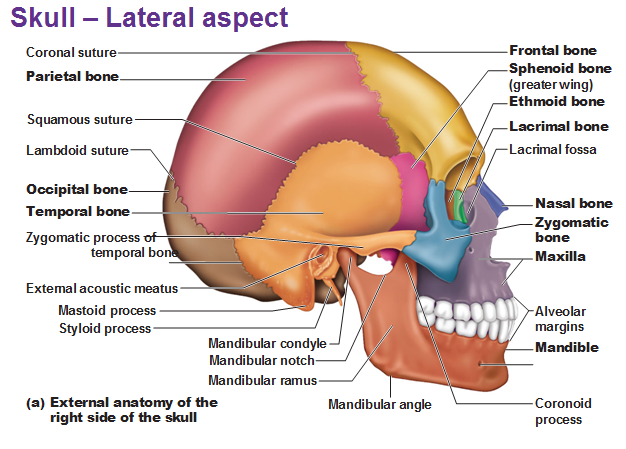 Temporal bone… where your temple is. 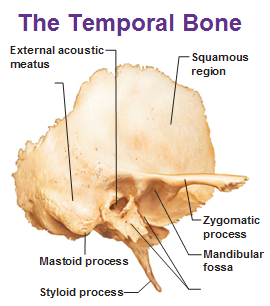 Your ear goes right on top of this external acoustic meatus.  Meatus is another word for a hole, or more specifically, a natural opening to the body.  Directly behind that is the mastoid process.  This can be felt as the hard bone behind your ear and funny enough, mast means breast in latin, so the mastoid process is apparently named that because it’s shaped like a boob.  The styloid process is below the E.A. meatus that looks like a toothpick (stylus pen).

The Zygomatic process of the temporal bone is what leads into the zygomatic bone.  Zygomatic comes from the word zygote which means fused because the zyomatic bone is what bonds the maxilla, temporal and the frontal bones.

The Mandibular fossa is a fossa on the temporal bone where the jaw connects.  It’s just in front of the E.A. meatus and is what the mandibular condyle fits into.

The mandible is the jaw. 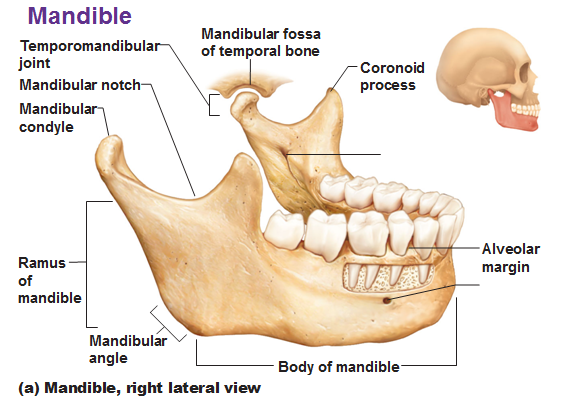 The mental protuberance (not labeled) is the chin.  The word mental is used for the chin because mentum in latin means chin. 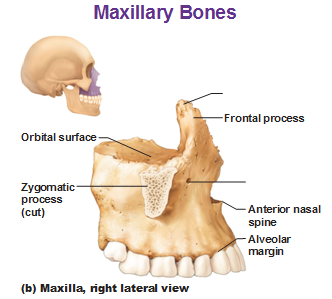 Right under the nose is the maxilla.

The anterior nasal spine is right under the nostril.

The frontal process leads to the frontal bone.  The maxilla goes very deep in your face and is very 3 dimensional.  The nasal bone forms the actual bridge of your nose right at the top.  If you break your nose, this is what breaks.  The orbital surface, is that large somewhat orbital shape. 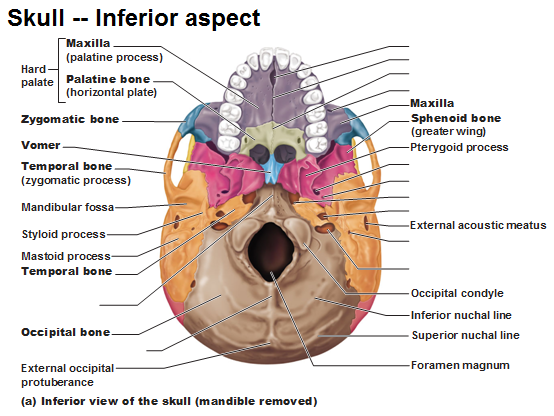 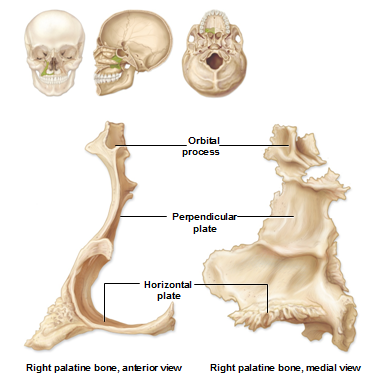 The sphenoid bone makes up a lot of the inside of the skull.  It looks like it is made of 2 sets of wings.  One is the lesser wing and the other is the greater wing.  The lesser is smaller than the greater, DUH.

The sella turcica (turkish saddle) is the spot where the pituitary gland goes.  It’s extremely protected with all the bone tissue around it.

The pterygoid process is that piece that extends down from the posterior side.  (ptery=wing, -goid=like something, so wing like, just like pterodactyl is a winged dinosaur). 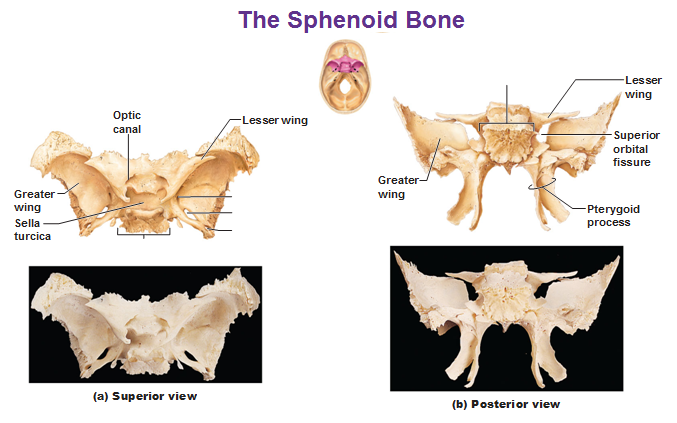 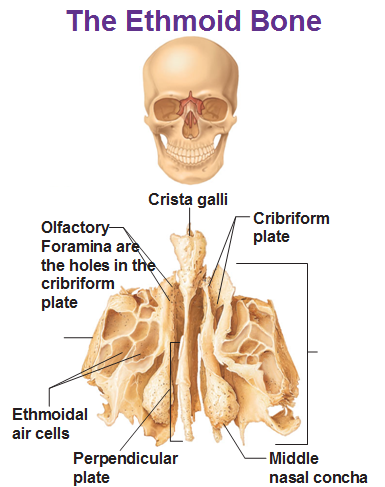 The ethmoid bone is a tiny bone that has tiny little holes such as the olfactory foramina.

The whole horizontal plate is called the cribriform plate that the holes are in.

The center is called the crista galli and is more solid.

The superior and middle and inferior nasal concha are twirly to create turbulence so the mucus could better trap the air and warm it before it enters the lungs.

YOU ARE HERE AT THE SKELETAL SYSTEM

For anyone who wants better shoulder health, shoulder flexibility, a looser upper back and improved posture, this program takes all the guess work out of it to … END_OF_DOCUMENT_TOKEN_TO_BE_REPLACED

This training routine is focused largely on increasing strength and muscle mass (aka muscular hypertrophy). If I had to sum up the routine in one fell swoop I … END_OF_DOCUMENT_TOKEN_TO_BE_REPLACED

This is for anybody who wants to get strong and have fun with a gymnastics-inspired routine. It is highly bodyweight-exercise oriented (no external weights) and … END_OF_DOCUMENT_TOKEN_TO_BE_REPLACED

In this day and age most people are working from home and struggling to find the balance between stagnation and moving to stay fit. This program was developed … END_OF_DOCUMENT_TOKEN_TO_BE_REPLACED

Looking for a simple and straightforward bodyweight-oriented strength training routine that doesn't take too much time? You're not the only one! A survey I … END_OF_DOCUMENT_TOKEN_TO_BE_REPLACED

I have three premium flexibility programs that I offer and many of you have been clamoring for a bundle-package, so here it is! You could now buy the … END_OF_DOCUMENT_TOKEN_TO_BE_REPLACED

I don't know about you but nothing gets me fired up more than working on my abs. It's a unique muscle group that is utilized in every exercise and making it … END_OF_DOCUMENT_TOKEN_TO_BE_REPLACED

I've created this hip flexibility program for those that would like to improve their flexibility in an efficient manner, with a follow along video that only … END_OF_DOCUMENT_TOKEN_TO_BE_REPLACED