The endocrine system is all about hormones.  So far the glands we’ve gone over, such as the liver, pancreas, etc, all have ducts that lead into openings.  The endocrine glands don’t have ducts and have a whole different process.  This collection of small, ductless glands secrete messenger molecules called hormones directly into the bloodstream.  By dumping the hormones straight into the blood stream, they could just circulate throughout the cardiovascular system and end up at a target organ.  That specific hormone will look for receptors on some specific organ and act upon that organ to trigger a physiological response.  So that’s how hormones are going to work at this level of your understanding.

Side note:This idea that we have specifically glands dedicated to secreting hormones is an old perspective.  Nowadays researchers are realizing the whole idea of an endocrine-specific gland is not accurate because EVERY organ in your body secretes hormones.   Every cell in the body secretes hormones.  This includes your bones, skin, etc. We know a lot about health but nothing nearly as much as we still have yet to learn. (In other words, we don’t know shit, relatively speaking.) 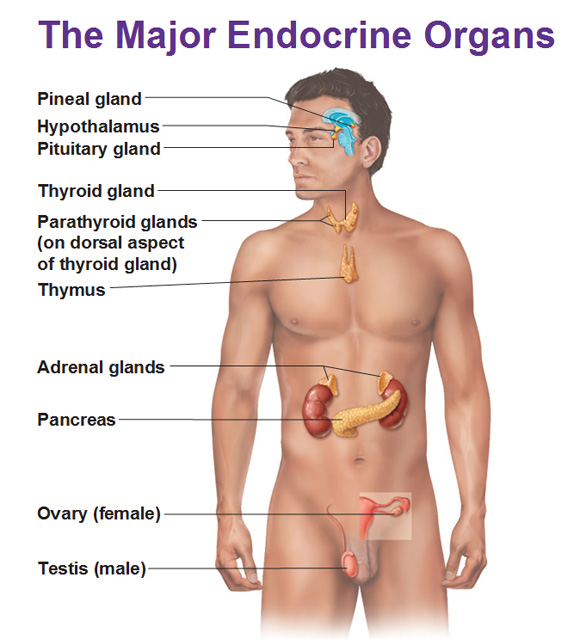 Just a quick rundown of the picture above: These are your major endocrine organs.  We’ve already talked about the pineal gland, hypothalamus, and we’ve also mentioned pituitary.  We didn’t get into the pituitary gland in detail yet but we will.  We have heard of the thyroid gland.  Thymus, we’ll talk about that in a little bit.  Adrenal glands, we’ve heard of those before when we talked about parasympathetic division of the ANS.  We’ve talked about pancreas and its exocrine function (the digestion part).  We’ve already talked about ovaries and testes in the reproductive system.  So that’s why it’s ideal to go over the endocrine system last. 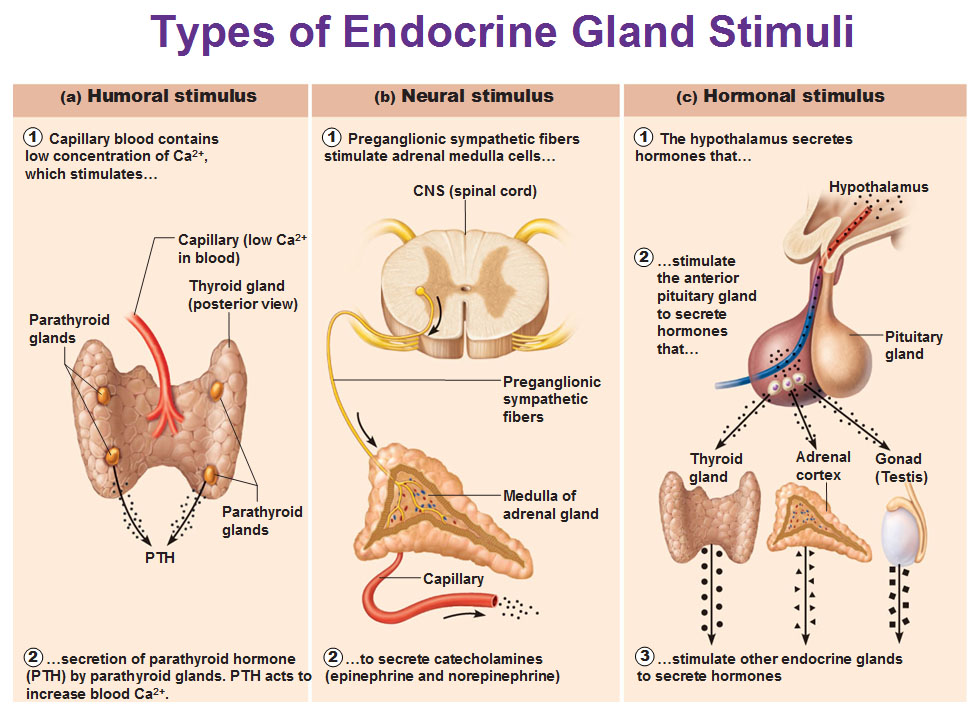 Above: This is an explanation of how hormones, in general, are released and do their job, which is usually to trigger another organ to release another hormone.  Then that new hormone will circulate and come back to the original endocrine gland so that the gland doesn’t have to send anymore hormones out.  This is a negative feedback loop.  A positive feedback loop is the reverse, in that it builds up stuff in the bloodstream and triggers the endocrine gland to get even more of that hormone.  No matter how an endocrine gland is stimulated, hormone secretion is always controlled by these feedback loops.

Notice the pituitary has an anterior and posterior lobe.  This is our master gland.  Hypothalamus has control over the pituitary, so it’s not really the master, but it’s called that for some reason.  The anterior lobe has 5 different types of endocrine cells that are going to make/release at least 7 different known hormones.  Some of the hormones are still unknown.  Endocrinology is a very active field in terms of research for figuring out stuff like this to this day. 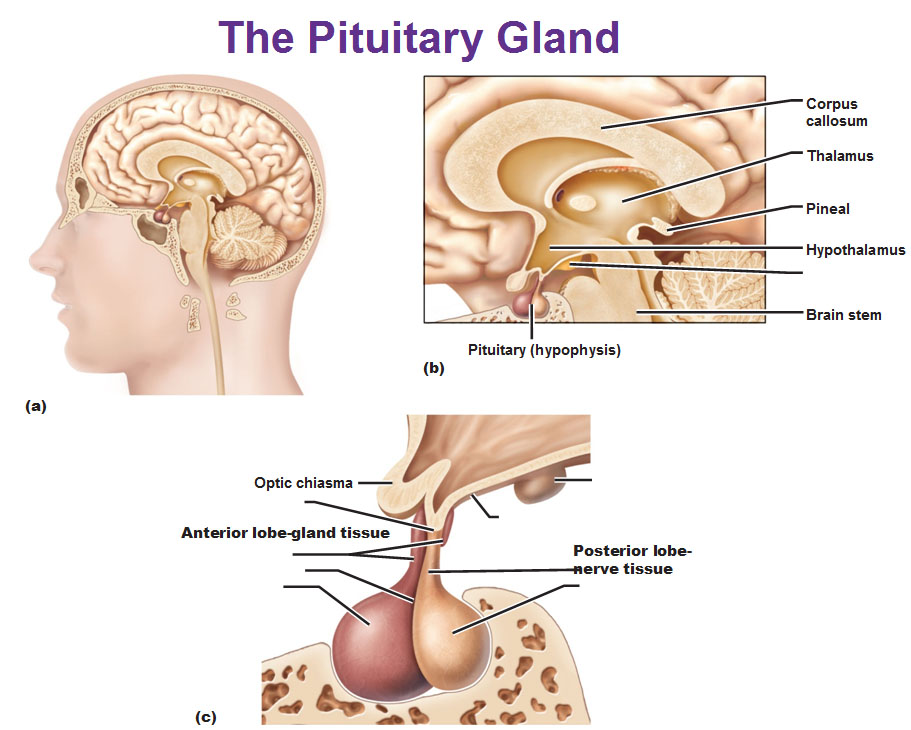 The pituitary could actually produce more than 7, but we know at least these:

Growth hormone stimulates growth of the entire body but especially those epiphyseal plates (located at the ends of the long bones in a child were those plates/strips made of cartilage, and that was where you could make the bone longer.  The cartilage would grow, get eaten away and get replaced with bone and repeat.) So the pituitary gland secretes growth hormone that goes to the plates to grow and then suddenly you need a new wardrobe.

Adrenocorticotropic hormone (Adreno sounds like adrenals, cortico sounds like cortex, -tropic means having an affinity for/being attracted to) so this is a hormone that stimulates the adrenal cortex to get it to secrete corticosteroids.

Melanocyte-stimulating-hormone.  We’ve heard melanocyte before in regards to the skin.  This stimulates those melanocytes but in the studies this hormone doesn’t significantly stimulate the production of melanin for humans specifically but in other animals it does.  Strangely enough of it suppresses your appetite and increases sexual arousal.

Gonadotropins (sound like gonads, so it’s in regards to the testes or ovaries and -tropis means being attracted to, so these hormones are going to tell the gonads to tell something.)  These are follicle stimulating hormones and luteinizing hormones (LH) which stimulates the maturation of sex cells (Sperms or eggs) and secrete sexual hormones (testosterone or estrogen/progesterone).

The posterior lobe of the pituary gland

The posterior lobe of the pituary is actually an extension of brain tissue containing the axons that store and release hormones produced in the hypothalamus and has a very different structure from the anterior lobe even though it’s considered to be a separate organ.  Released from those neurons are antidiuretic hormones (diuretic is in regards to getting rid of water, which the kidneys are going to do) that act at the kidneys to help keep water.  Oxytocin gets smooth muscle to contract in the uterus.  More specifically, these uterine contractions happen during childbirth and after birth this hormone tells the breast tissue to eject milk into those lactiferous sinuses.

Not too much here as far as anatomy goes.  Thyroid cartilage is right in the front of the gland. We have a right and left lateral lobe.  The isthmus is the connection of the two lobes in the middle.  You could see the relationship with the aorta and how close they run. 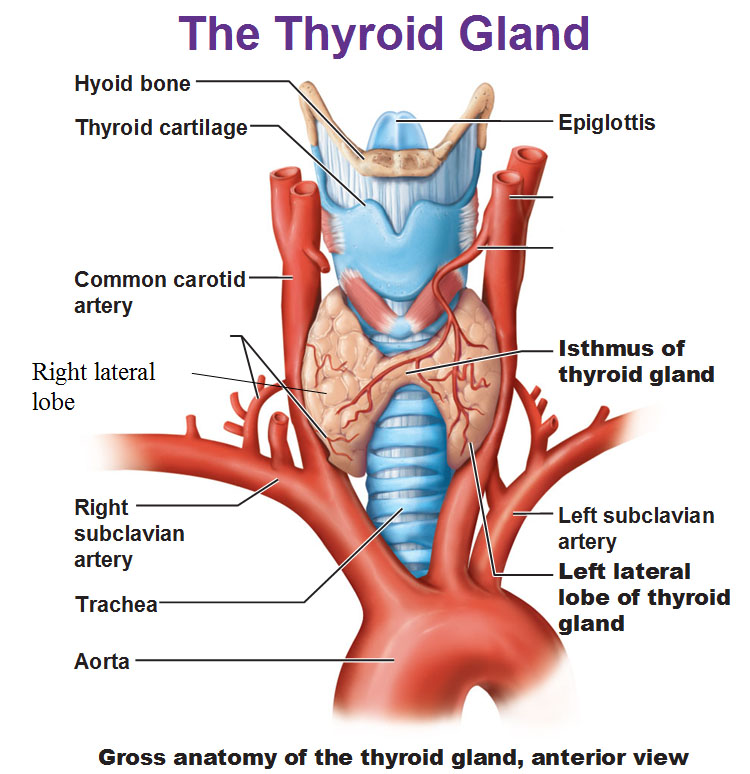 The thyroid is a big heavy-duty, physiology topic, as most of the endocrine glands are, so let’s look at it a little.

Follicular cells produce the actual thyroid hormone (aka T3 and T4).  We’ve all heard of iodine before, right?  That thyroid hormone carries iodine in it and is responsible for regulating your basal metabolic rate.

Parafollicular cells (para meaning next to) are going to produce calcitonin which is related to calcium. This lowers the calcium levels in your body by acting on the kidneys.  Calcium happens to be one of the ions the kidney can release back in the body or keep it to go to the uterine system.  We need calcium for the bone tissue and for heart muscle contraction.

Below: If we turn the neck structure around and look from the back, we will see the larnygopharynx, which is behind the larynx.  So when we look for the thyroid gland in this posterior view, we see the two lateral lobes of it with the pharynx on top.  On the back of those lobes we have these tiny glands called parathyroid glands.  The parathyroid cells are going to release parathyroid hormone which helps increase calcium concentration in the blood. Another type of cell called an oxyphil cell, whose function still has not been determined yet, exists there. 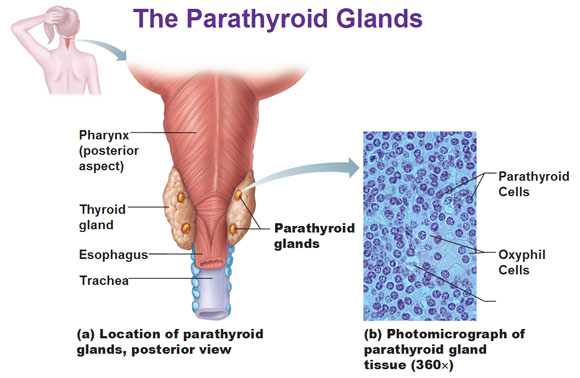 We already talked about the medulla of the adrenal gland so we’re going to talk about the cortex which is the outer layer.  Remember the medulla portion is part of the sympathetic nervous system and it secretes epinephrine and norepinephrine.  The adrenal cortex forms the bulk of the gland and it secretes corticosteroid hormones which have a relationship to the stuff secreted by the medulla because they do very similar things.

Aldosterone eventually gives us testosterone.  Cortisol and androgens also contribute to testosterone production.  If you have trauma with blood loss occurring, those adrenals will go nuts to keep your heart pumping when it senses your blood pressure is dropping.  If you have an infection the adrenals will help it fight with all its might.  Fasting is pretty stressful on the body too and the adrenal cortex will definitely kick in to keep everything revved up.  Stress also moves that entire adrenal gland.  All adrenal hormones help cope with danger, terror or stress. 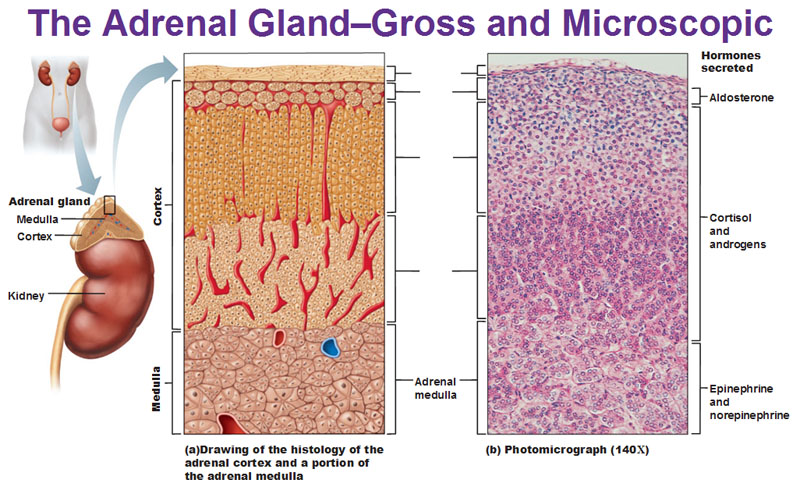 We’ve talked about the pineal gland a little before when we talked about the epithalamus but here’s a little more detail.  Pinealocytes secrete melatonin, a hormone that regulates circadian rhythms.  This process is also under the influence of the hypothalamus.  There are calcium ions located between the cells known as “Pineal sand” (aka corpora arenacea).  Because the calcium is radiopaque, the pineal gland is used as a landmark to identify other brain structures in x-rays. 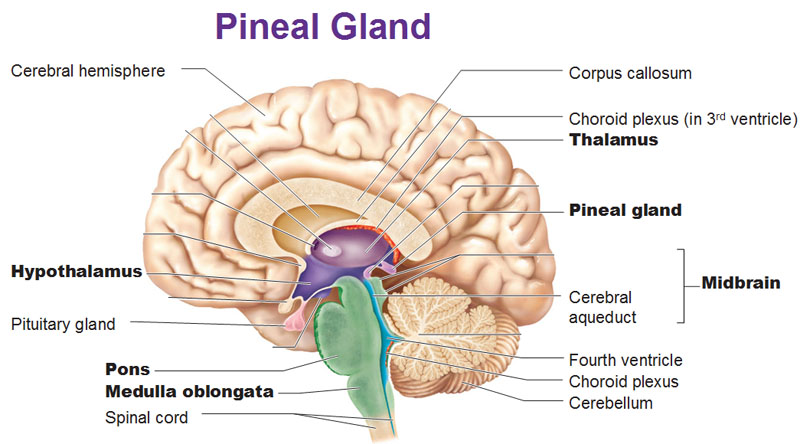 The beta cells secrete insulin that goes into the bloodstream all over the body and functions in all of your cells to allow glucose in so the cells can digest it.

Alpha cells secrete hormone called glucagon which signal the liver to release its storage of glucose in the form of glycogen (which is just a starch; glycogen is a bunch of glucoses stuck together to make a starch) because you need some glucose for something like, if you haven’t ate for a while or you need a burst of energy. 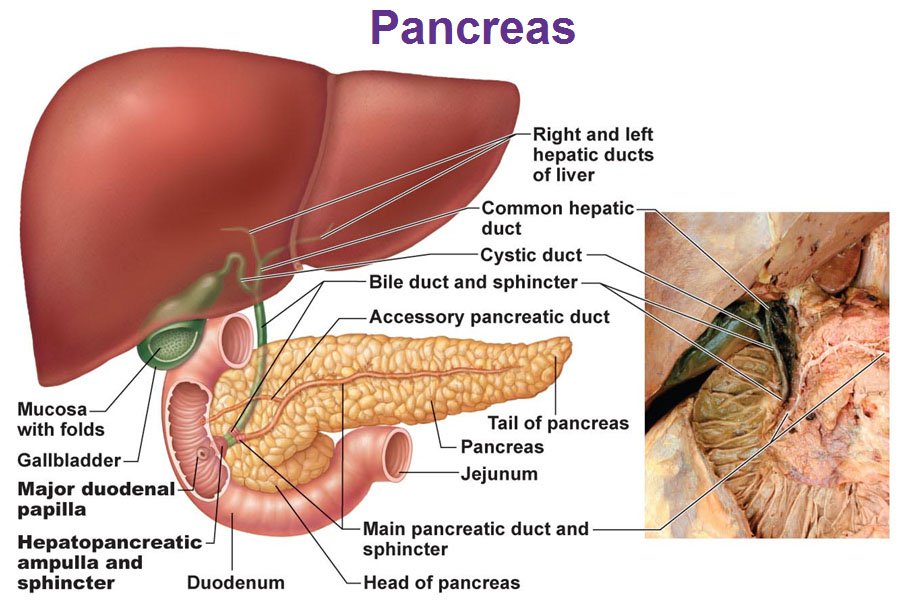 This is in the chest sitting on top of the trachea.  The thymus is really working more so during childhood and really by the time you hit 40 it has been completely replaced by fatty tissue.  The thymic hormones stimulate the development and maturation of T-lymphocytes, a specific type of white blood cell in the lymphatic system.  You’re exposed to most of your diseases for the first time during your childhood and that is when you’re building up your immunity.  So that thymus is working aplenty during the childhood, developing t-lymphocytes, but when you are an adult you aren’t exposed to too many new things.  You may be exposed to a different strain of a cold or flu virus but in general it’s most of the same stuff by the time you hit 40. 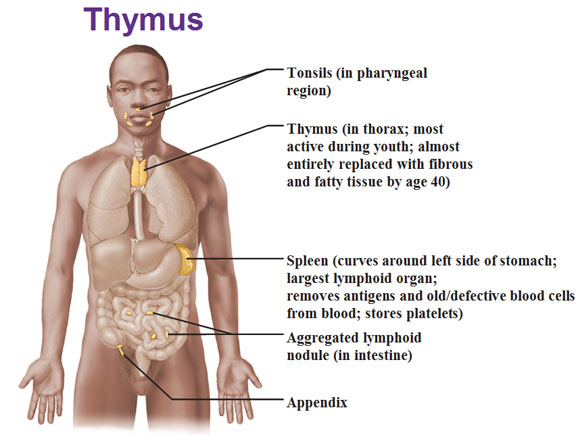 These glands are under the control of the pituitary gland.  We’ve talked about these before about how they produce sperm and eggs.  In between those cells that are becoming the actual sex cells are interstitial cells (that means in between) that are responsible for secreting hormones for our sexual lives.

In the testes, interstitial cells secrete mostly testosterone, which is a type of androgen.  The testosterone influences the formation of sperm (in seminiferous tubules) and develops your secondary sex characteristics like your public hair, axillary hair, facial hair and growing those reproductive organs during puberty and maintaining them into adulthood.

In the ovaries, those interstitial cells are called follicle cells (some turn into corpus luteum) and secrete a different version of androgen called estrogen and progesterone.  Progesterone (P for Prepare) prepares the uterus for pregnancy.  Estrogen does the same thing testosterone does for the male, it helps produce pubic and axillary hair (no facial hair), develop and maintain the sexual organs.

I've created this hip flexibility program for those that would like to improve their flexibility in an efficient manner, with a follow along video that only … END_OF_DOCUMENT_TOKEN_TO_BE_REPLACED

In this day and age most people are working from home and struggling to find the balance between stagnation and moving to stay fit. This program was developed … END_OF_DOCUMENT_TOKEN_TO_BE_REPLACED

For anyone who wants better shoulder health, shoulder flexibility, a looser upper back and improved posture, this program takes all the guess work out of it to … END_OF_DOCUMENT_TOKEN_TO_BE_REPLACED

For those who have poor flexibility, tight hamstrings and want a simple program that will help them to get looser in a gentle, non-painful manner. In this … END_OF_DOCUMENT_TOKEN_TO_BE_REPLACED

I have three premium flexibility programs that I offer and many of you have been clamoring for a bundle-package, so here it is! You could now buy the … END_OF_DOCUMENT_TOKEN_TO_BE_REPLACED

This training routine is focused largely on increasing strength and muscle mass (aka muscular hypertrophy). If I had to sum up the routine in one fell swoop I … END_OF_DOCUMENT_TOKEN_TO_BE_REPLACED

This is for anybody who wants to get strong and have fun with a gymnastics-inspired routine. It is highly bodyweight-exercise oriented (no external weights) and … END_OF_DOCUMENT_TOKEN_TO_BE_REPLACED

I don't know about you but nothing gets me fired up more than working on my abs. It's a unique muscle group that is utilized in every exercise and making it … END_OF_DOCUMENT_TOKEN_TO_BE_REPLACED