We have 31 pairs of spinal nerves and they are named after the section of the spine they come out of. 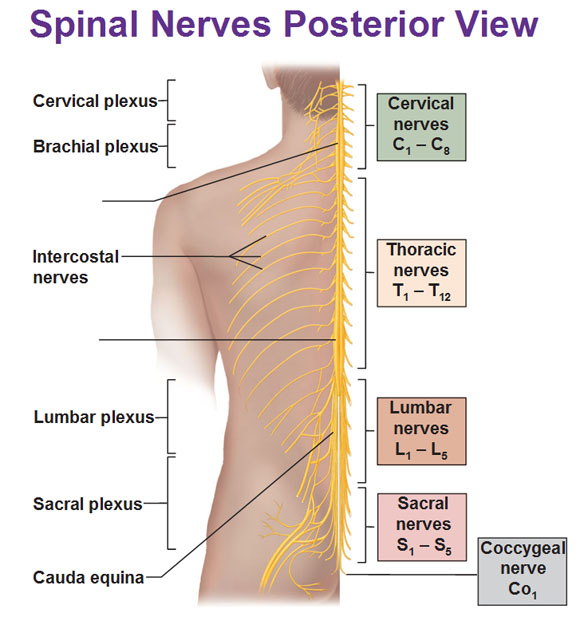 Why do we have an 8th pair of cervical nerves if we only have 7 cervical vertebrae you ask?  Well because we start at the top of the atlas and all the nerves are in between the vertebrae so the 8th pair is in between C7 and T1. 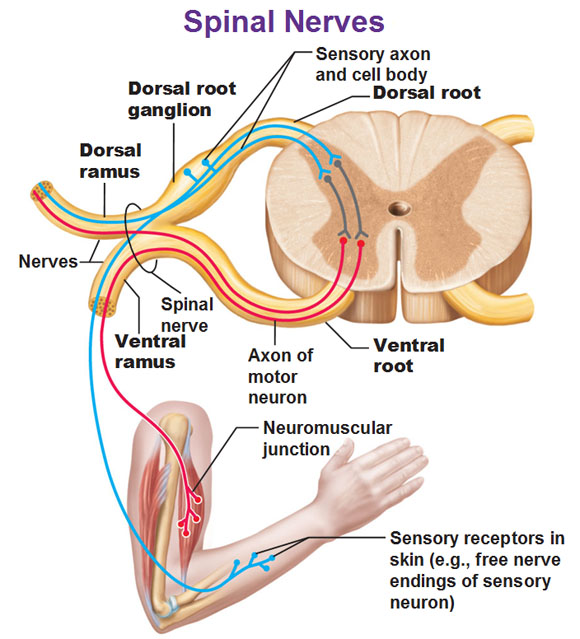 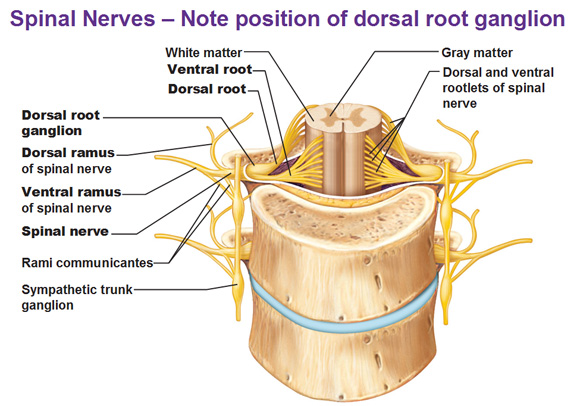 The dorsal rami innervate the deep muscles of the back for motor control, such as the erector spinae and also a horizontal strip of skin for sensory input.

The ventral rami in the thoracic region are known as the intercostal nerves.  They run deep to the ribs and innervate the intercostal muscles and provide sensory input for the overlying horizontal strips of skin there as well as the abdominal wall muscles (motor) and skin (sensory).  The innervation of the back, ribs, and abdominal area is shown here: 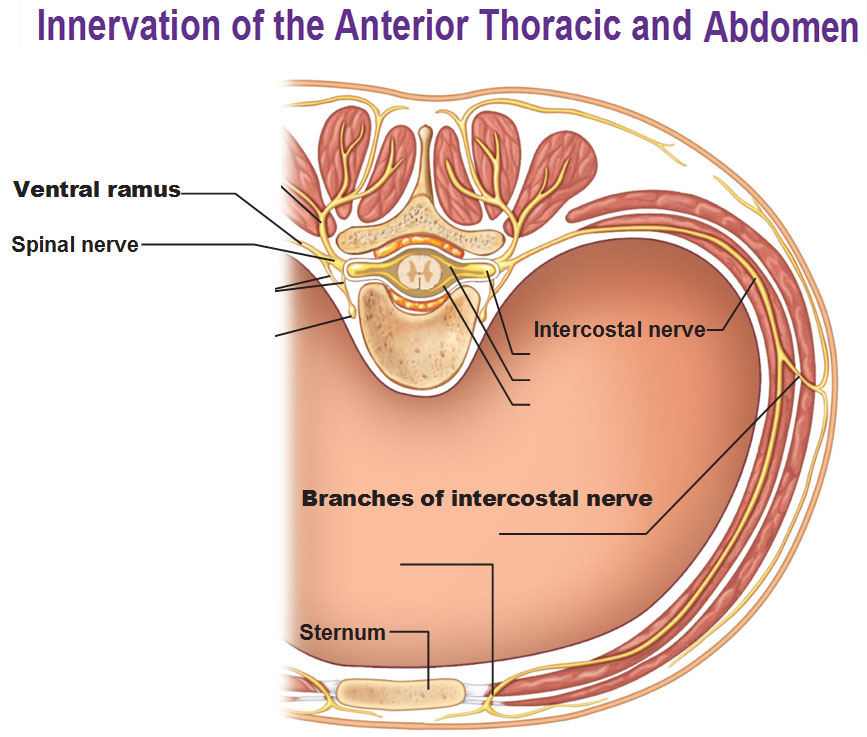 A nerve plexus is a network of nerves that seem to be tangled that mostly serve the limbs. Each network is a network of nerves that come together and then redistribute themselves out with a different distribution of nerves into the limbs.  They are made from the rest of the ventral rami (that is, from other than the thoracic region that we haven’t talked about yet).  Each end of each plexus contains fibers from several spinal nerves.  The fibers from each ventral ramus travels along different routes so that each limb muscle receives innervation from more than 1 spinal nerve to have a backup plan in case of injury.

We have four plexuses:  Cervical, Brachial, Lumbar, and Sacral

This plexus is located underneath the sternocleidomastoid muscle (from C1 – C4). Most of the branches innervate the skin of neck and deep neck muscles.  The Phrenic nerve (C3, C4, C5) gets special mention that innervates the top of the diaphragm (after traveling down through thoracic cavity, along either side of the heart).  Note that if both phrenic nerves are cut or if the spinal cord is severed above C3, breathing stops. 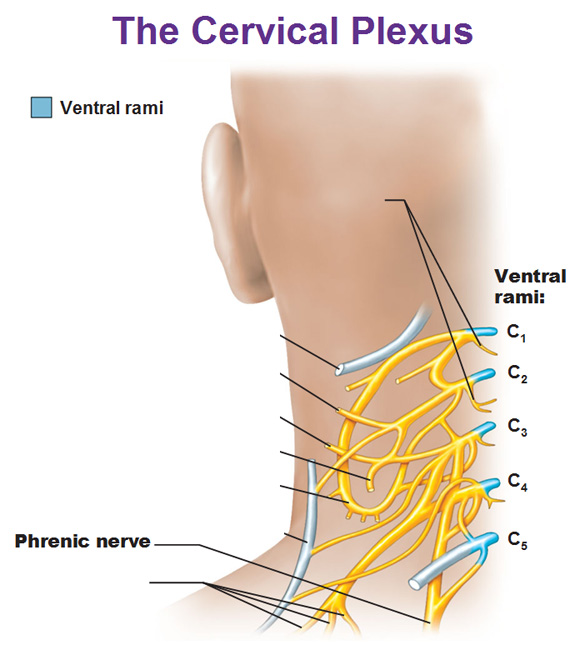 This plexus gets contribution from the transitional area from neck into armpit (axilla) between C5 and T1.  It provides almost all the innervation of the upper limb (this includes back and scapular muscles that control the limb).  The organization of this plexus is also very messy.  There’s mixing of branches and then a branching of branches and then mixing again. Note how there’s divisions, trunks and roots. 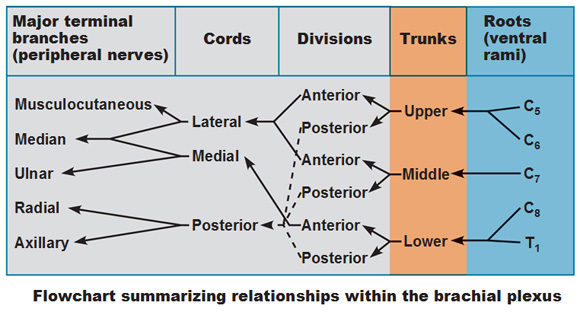 Five nerves innervate the muscles of the arm: 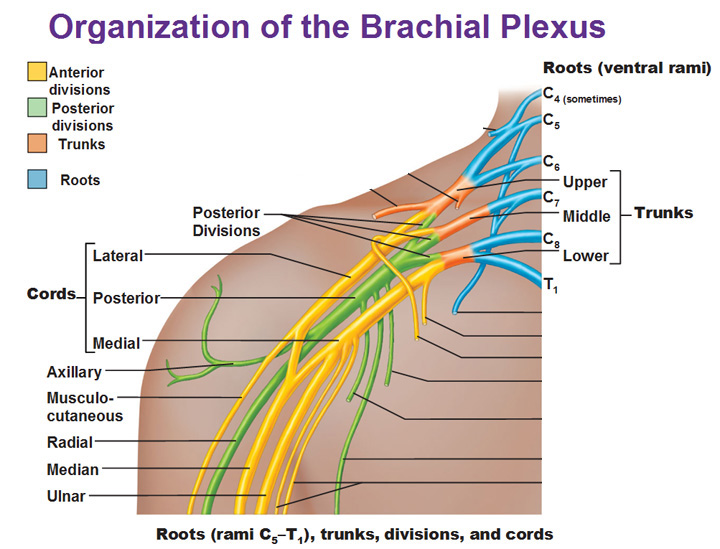 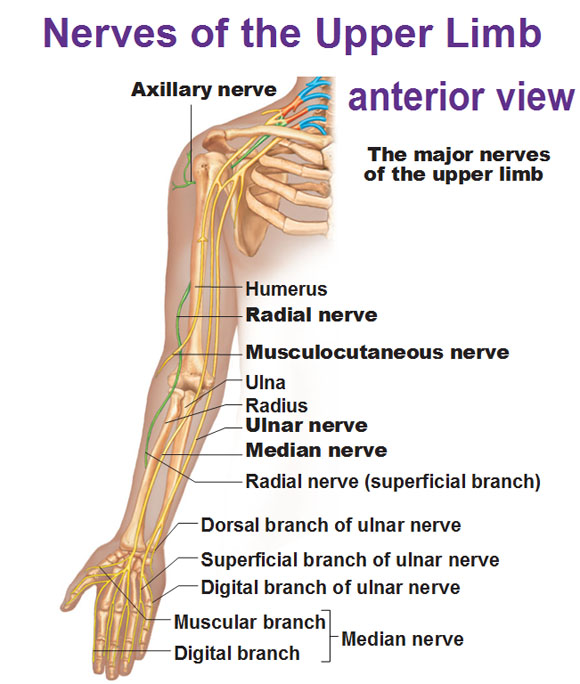 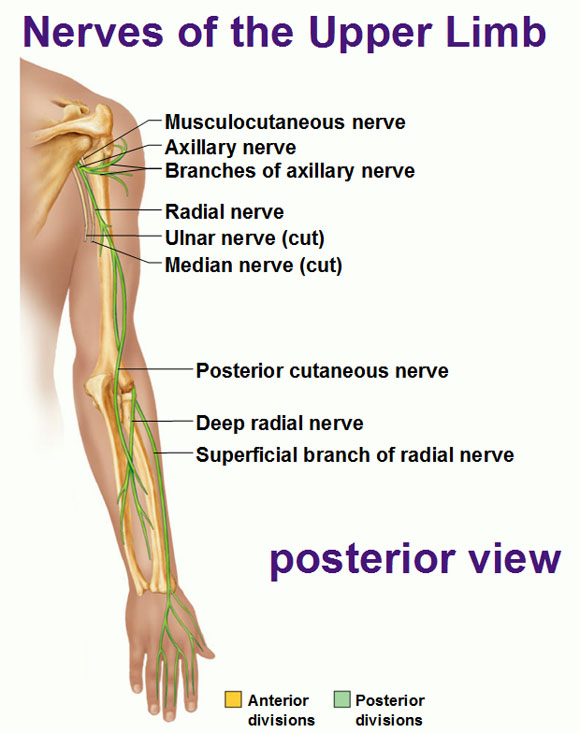 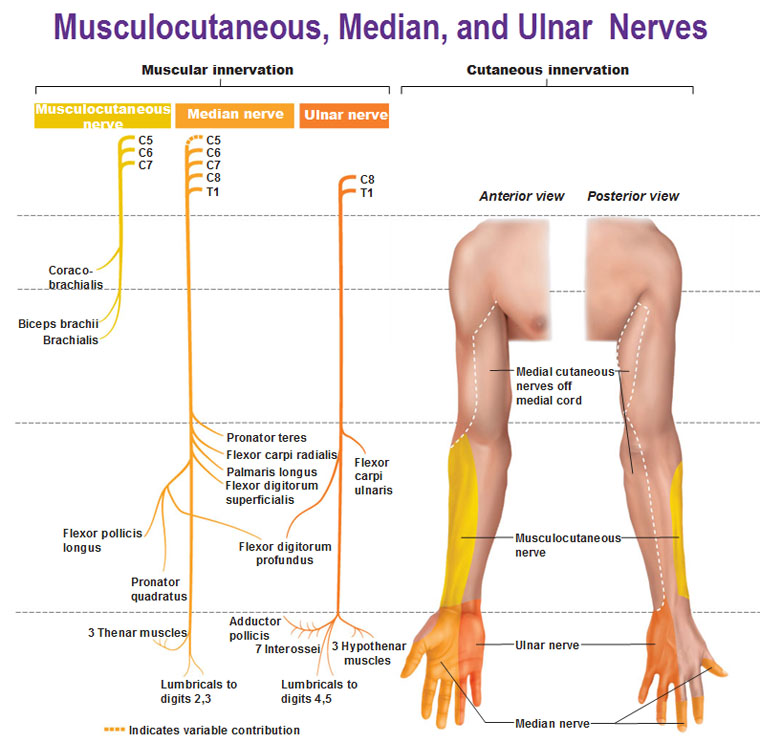 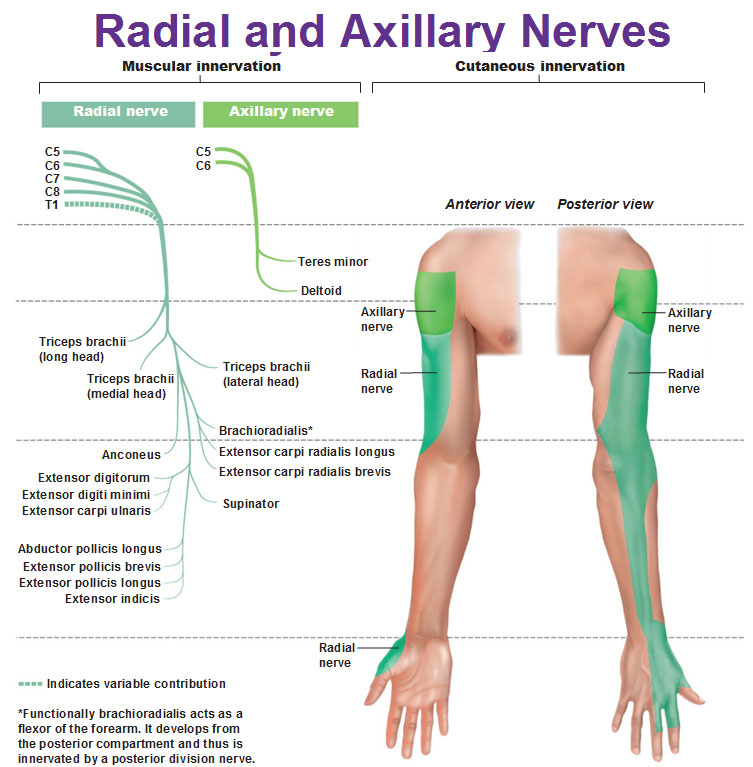 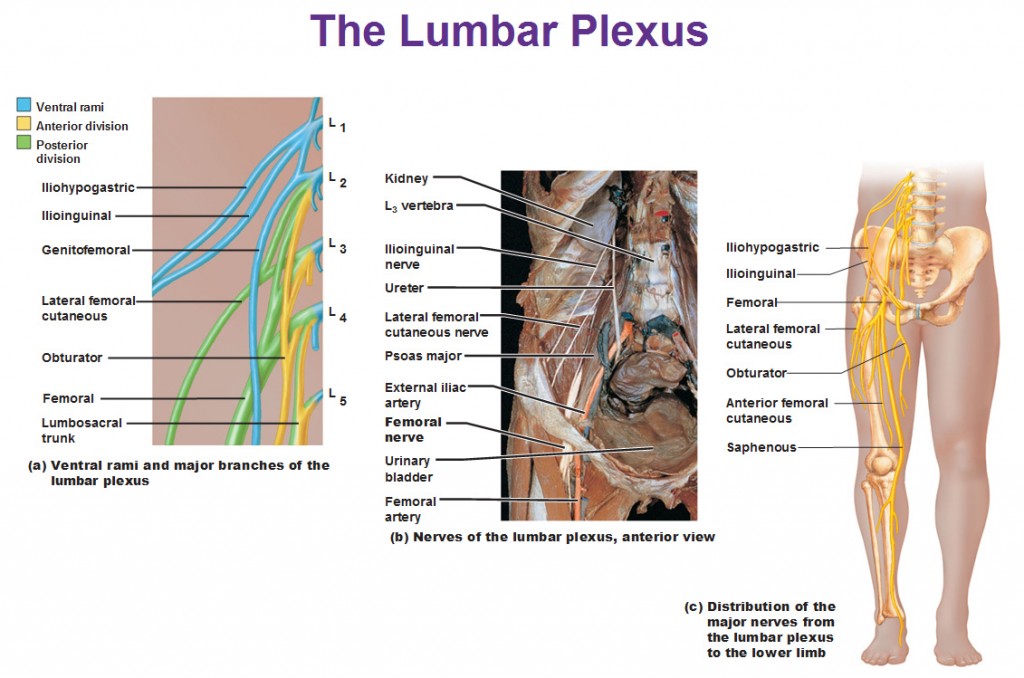 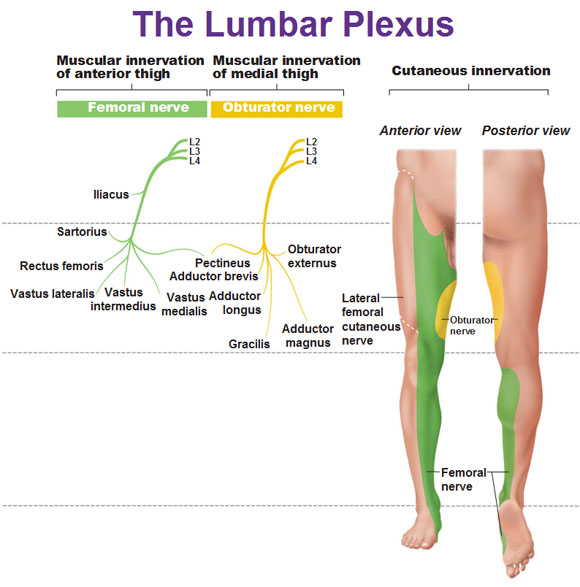 Sciatic nerve, the largest nerve of the sacral plexus is actually two nerves wrapped in one sheath: 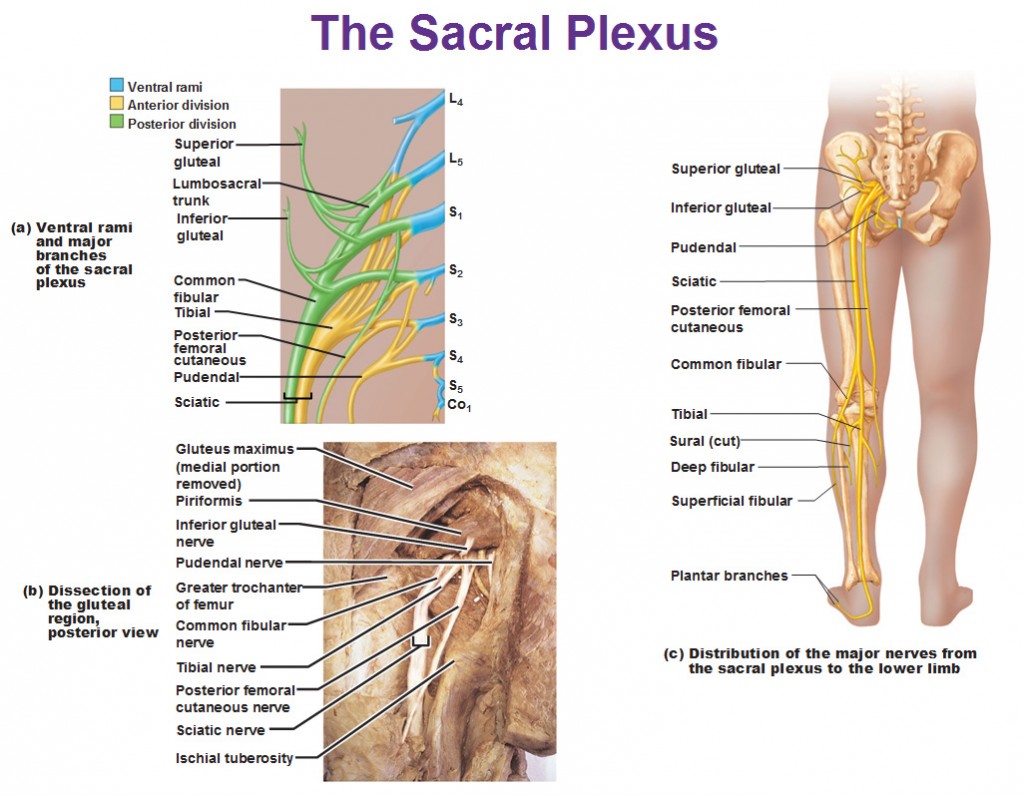 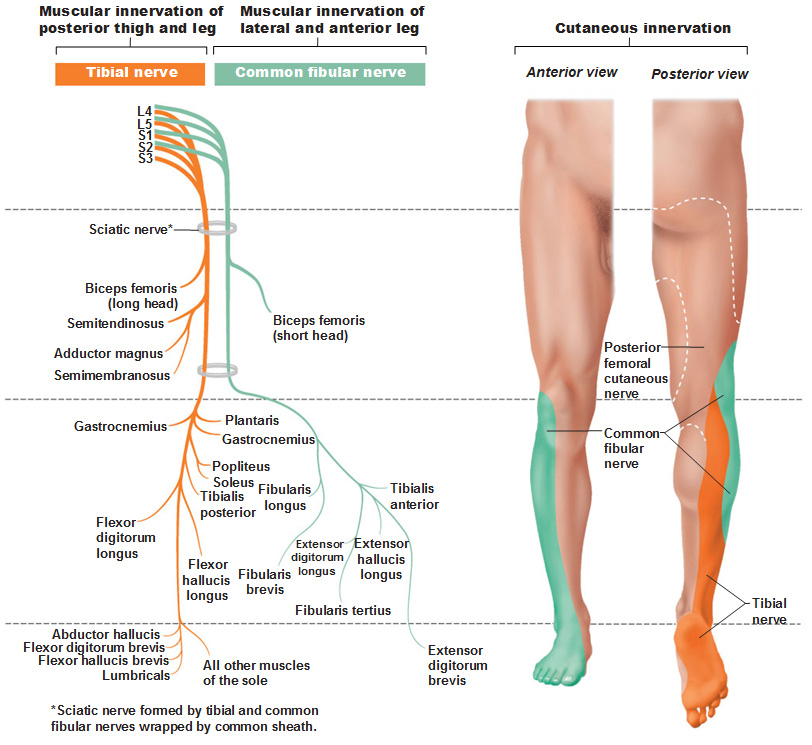 And that’s that! Look into the next article about dermatomes for a continuation of the spinal nerve discussion and find out what area of skin is innervated by which spinal nerve.

YOU ARE HERE AT THE PNS

This training routine is focused largely on increasing strength and muscle mass (aka muscular hypertrophy). If I had to sum up the routine in one fell swoop I … END_OF_DOCUMENT_TOKEN_TO_BE_REPLACED

For anyone who wants better shoulder health, shoulder flexibility, a looser upper back and improved posture, this program takes all the guess work out of it to … END_OF_DOCUMENT_TOKEN_TO_BE_REPLACED

This is for anybody who wants to get strong and have fun with a gymnastics-inspired routine. It is highly bodyweight-exercise oriented (no external weights) and … END_OF_DOCUMENT_TOKEN_TO_BE_REPLACED

In this day and age most people are working from home and struggling to find the balance between stagnation and moving to stay fit. This program was developed … END_OF_DOCUMENT_TOKEN_TO_BE_REPLACED

Looking for a simple and straightforward bodyweight-oriented strength training routine that doesn't take too much time? You're not the only one! A survey I … END_OF_DOCUMENT_TOKEN_TO_BE_REPLACED

I have three premium flexibility programs that I offer and many of you have been clamoring for a bundle-package, so here it is! You could now buy the … END_OF_DOCUMENT_TOKEN_TO_BE_REPLACED

I've created this hip flexibility program for those that would like to improve their flexibility in an efficient manner, with a follow along video that only … END_OF_DOCUMENT_TOKEN_TO_BE_REPLACED

For those who have poor flexibility, tight hamstrings and want a simple program that will help them to get looser in a gentle, non-painful manner. In this … END_OF_DOCUMENT_TOKEN_TO_BE_REPLACED