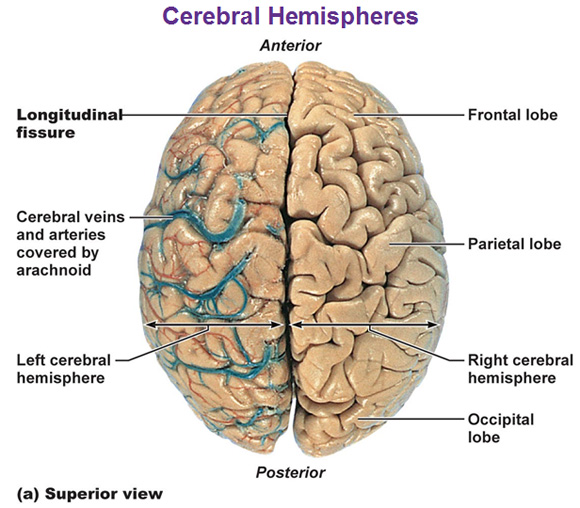 Note the cerebral hemispheres are split by the deep fissure called the longitudinal fissure that runs perfectly in the mid-sagittal position.  The lobes are very easy to identify as they are named after the bones that sit right on top of them. 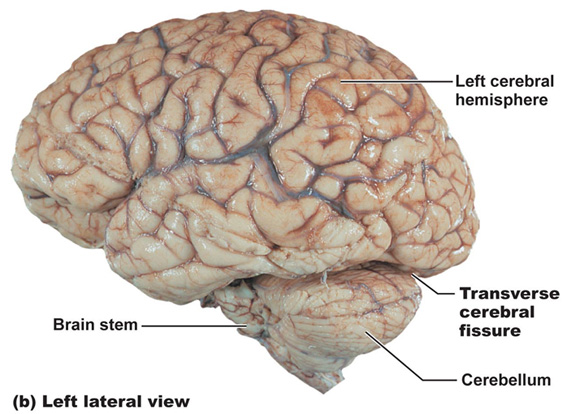 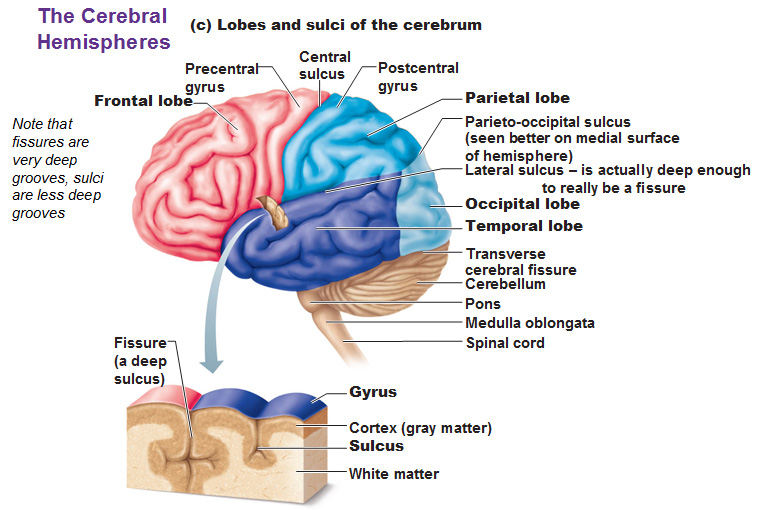 Gray and white matter of the cerebral hemispheres

The cerebral cortex is the outermost layer that is made up of all the gyri (sausage looking things!) and is made of gray matter that makes up the conscious brain.  It consists of neuron cell bodies and short, unmyelinated axons with no fiber tracts.  The cerebral cortex enables us to be aware of ourselves and our sensations, initiate and control voluntary movements and communicate, remember and understand.

We find white matter internal to the cortex.  And even deeper to that we find gray matter again which consists of brain nuclei.

How much of our brain do we really use?

All of it!  From an evolutionary standpoint our brains wouldn’t be as big as it was if we didn’t use it.  Nature doesn’t like waste.  The we-only-use-10% thing is a myth that came about in the late 19th/early 20th century with the advent of psychology and brain research.  The facts, over time were misconstrued by the public and especially by self-help entrepreneurs.  Surely only some parts of your brain are used at times but all of it is important.

For those who have poor flexibility, tight hamstrings and want a simple program that will help them to get looser in a gentle, non-painful manner. In this … END_OF_DOCUMENT_TOKEN_TO_BE_REPLACED

I've created this hip flexibility program for those that would like to improve their flexibility in an efficient manner, with a follow along video that only … END_OF_DOCUMENT_TOKEN_TO_BE_REPLACED

In this day and age most people are working from home and struggling to find the balance between stagnation and moving to stay fit. This program was developed … END_OF_DOCUMENT_TOKEN_TO_BE_REPLACED

Looking for a simple and straightforward bodyweight-oriented strength training routine that doesn't take too much time? You're not the only one! A survey I … END_OF_DOCUMENT_TOKEN_TO_BE_REPLACED

This is for anybody who wants to get strong and have fun with a gymnastics-inspired routine. It is highly bodyweight-exercise oriented (no external weights) and … END_OF_DOCUMENT_TOKEN_TO_BE_REPLACED

I don't know about you but nothing gets me fired up more than working on my abs. It's a unique muscle group that is utilized in every exercise and making it … END_OF_DOCUMENT_TOKEN_TO_BE_REPLACED

For anyone who wants better shoulder health, shoulder flexibility, a looser upper back and improved posture, this program takes all the guess work out of it to … END_OF_DOCUMENT_TOKEN_TO_BE_REPLACED

I have three premium flexibility programs that I offer and many of you have been clamoring for a bundle-package, so here it is! You could now buy the … END_OF_DOCUMENT_TOKEN_TO_BE_REPLACED