The immune system is a specific part of the system that’s going to recognize anything that’s foreign and try to get rid of it.  The immune system becomes more efficient with the destruction with each subsequent exposure.

Our super most important cells are our lymphocytes which are a type of white blood cell.

The lymphoid organs that contain lymphocytes are the lymph nodes, spleen, thymus, tonsils, aggregated lymphoid nodules in small intestine, and the appendix.

T-lymphocytes make up 70-85% of the lymphocytes in our bodies.  There are two main groups: Helper T cells and Cytotoxic cells and have been given numerical names, T4 and T8.

There are different types of Helper T-lymphocytes and each one responds to a specific type of antigen (anything that is a foreign shape or projecting from a surface).  They are the ones that initially do the recognition.  These are the cells that HIV really likes to inhabit and use, like pirates.  All viruses are like pirates that like to enter into cells and each virus has a cell of choice.  Just like how pirates get on a ship and use the ship they get, along with the cannons, to hijack other ships.  A virus wants to replicate itself but it doesn’t have enough machinery on its own to do it.  Viruses use DNA and mRNA for making their own proteins.  So the virus is going to repackage all these cells until the cells explode.  So they blow up the ship, and go get 1,000 more ships and then repeat the process.  HIV specifically enters into these helper T-cells, reproduce and blow up the ship.  This exponentially increases and the problem is that these are knocking out the immune system at the core.  Usually it’s another infection that eventually wipes out the patient and not the actual HIV that does it because their defenses are down.

We aso have cytotoxic T-lymphocytes which respond to one type of foreign thing (antigen) but these are the ones that actually do the killing.  After a helper cell does the recognition, they attach to the target cell and secrete substances that will cause the target cell to burst.

These make up about 15-30% of the lymphocytes.  Each one responds to one specific antigen but only after they are activated by a T-cell that’s recognized something.  The T-cell presents the information to the B-cell and it responds by making antibodies.  Another name for antibodies are immunoglobulins.  They have a very specific shape that helps mark foreign antibodies so that they could be marked for destruction.  Some of these B-cells, instead of producing and releasing antibodies, will quietly be activated by the T-cells and linger in the background as memory-B-lymphocytes to mount a quicker immune response the next time the same antigen shows up.

Mucosa-associated lymphoid tissues (MALT) includes the mucous membranes of digestive, urinary, respiratory, and reproductive tracts.  This particular tissue below is found in the small intestine in these little patches/globs buried inside the mucosa of the small intestine. 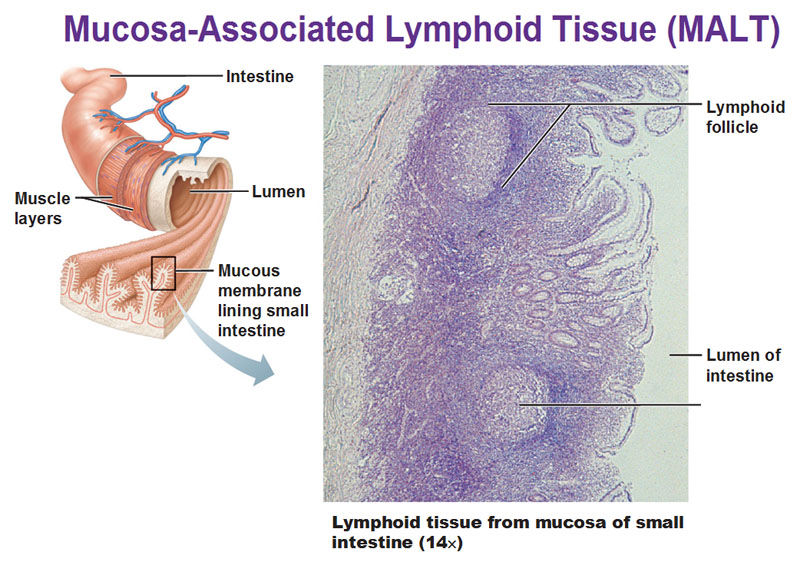 Lymphoid Organs: Bone marrow (not shown) produces B-Lymphocytes and the Thymus produces T-lymphocytes.  These other organs store lymphocytes and gather/destroy pathogens.  The Spleen curves around the left side of stomach and is the largest lymphoid organ.  It removes antigens and old/defective blood cells from the blood and stores platelets. 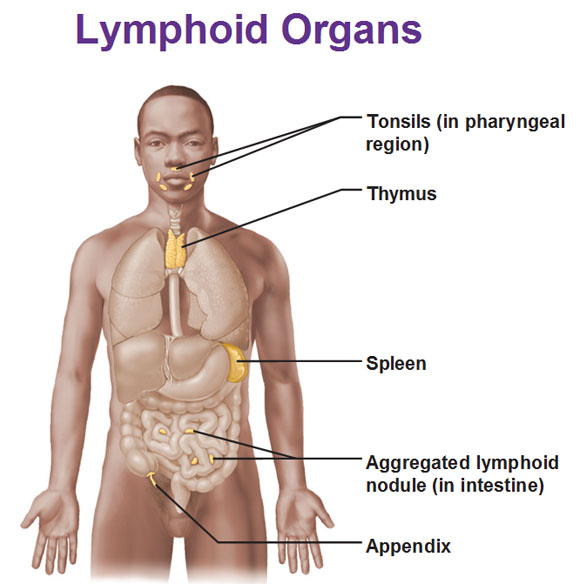 The spleen is that organ that can be confused with a kidney hanging out by the pancreas.  That spleen is made up of lymphoid tissue that resembles a giant lymph node when you cut it in half.  We have red pulp and white pulp, with lymph circulating through, being cleansed but also specifically the red pulp takes care of dead red blood cells.

The red pulp surrounds the white pulp.  It is composed of venous sinuses, splenic cords and it’s where macrophages phagocytize worn out RBC’s. (red pulp for red blood cells)

The white pulp is what provides the immune function of the spleen and is made of thick sleeves of lymphoid tissue.  Here is where blood-borne antigens are destroyed as they are activated by the immune response. (white pulp for white blood cells).

For anyone who wants better shoulder health, shoulder flexibility, a looser upper back and improved posture, this program takes all the guess work out of it to … END_OF_DOCUMENT_TOKEN_TO_BE_REPLACED

Looking for a simple and straightforward bodyweight-oriented strength training routine that doesn't take too much time? You're not the only one! A survey I … END_OF_DOCUMENT_TOKEN_TO_BE_REPLACED

I have three premium flexibility programs that I offer and many of you have been clamoring for a bundle-package, so here it is! You could now buy the … END_OF_DOCUMENT_TOKEN_TO_BE_REPLACED

I've created this hip flexibility program for those that would like to improve their flexibility in an efficient manner, with a follow along video that only … END_OF_DOCUMENT_TOKEN_TO_BE_REPLACED

This training routine is focused largely on increasing strength and muscle mass (aka muscular hypertrophy). If I had to sum up the routine in one fell swoop I … END_OF_DOCUMENT_TOKEN_TO_BE_REPLACED

In this day and age most people are working from home and struggling to find the balance between stagnation and moving to stay fit. This program was developed … END_OF_DOCUMENT_TOKEN_TO_BE_REPLACED

For those who have poor flexibility, tight hamstrings and want a simple program that will help them to get looser in a gentle, non-painful manner. In this … END_OF_DOCUMENT_TOKEN_TO_BE_REPLACED

This is for anybody who wants to get strong and have fun with a gymnastics-inspired routine. It is highly bodyweight-exercise oriented (no external weights) and … END_OF_DOCUMENT_TOKEN_TO_BE_REPLACED