The brain is protected from injury by the skull, meninges, cerebrospinal fluid and the blood-brain barrier. In this post we will explore them all in detail, well, except for the skull since that was already discussed in other posts about the bones.

The function of the meninges is to cover and protect the brain itself.  It encloses and protects the vessels that supply the brain and contains CSF between the pia mater and arachnoid maters.  Immediately deep to the periosteum is the periosteal and meningeal which create the dura mater.  The dura mater is found all around the brain and its 2 layers separate and create spaces called dural sinuses.  See the blue triangle below?  The meningeal separates from the periosteal and goes down into the longitudinal fissure.  The space that is firmed is a sinus. 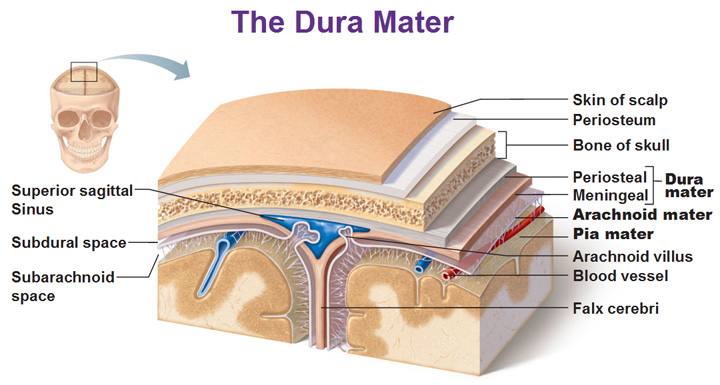 The arachnoid villi (villus for singular) protrude from the arachnoid mater (the thin second layer) and allow CSF to exit the brain and pass into the blood.  The continuation of the meningeal becomes the falx cerebri pictured above and is found only in the longitudinal fissure.  The falx cerebri is the fusion of the meningeal layers of the dura mater below the superior sagittal sinus.  The superior sagittal sinus is the largest dural sinus and filled with blood. 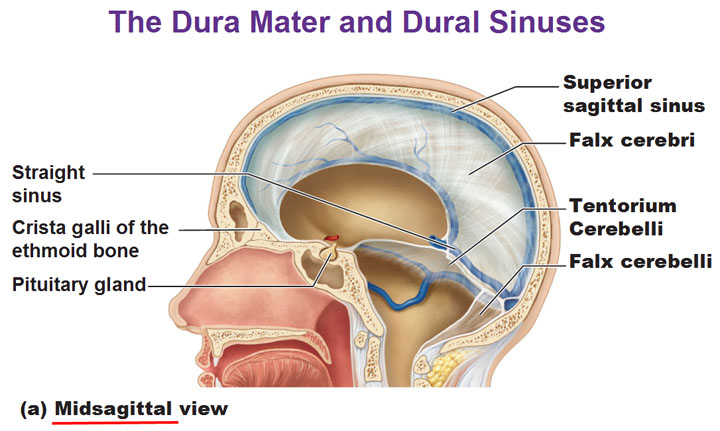 Falx Cerebelli (not to be confused with falx cerebri) is a small triangular process of dura mater, received into the posterior cerebellar notch and runs along the vermis (the rounded and elongated central part of the cerebellum, between the two hemispheres.) 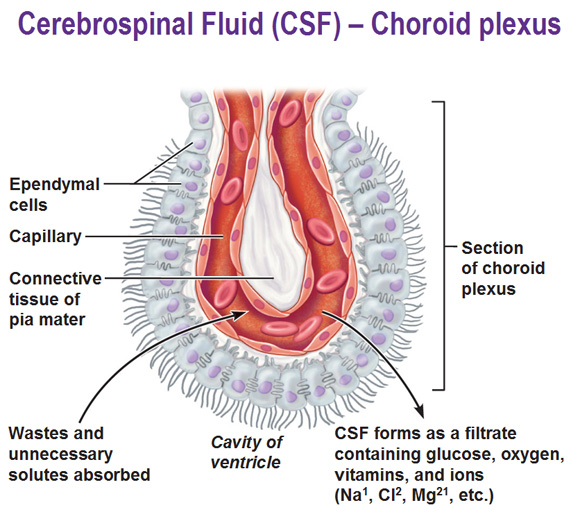 About 500ml per day circulates everyday from blood to CSF and then back to blood.  Get acquainted with the flow in the second picture below.

Blood-Brain Barrier protects the brain from within

This is the final layer of protection in the brain.  These flattened out cells called endothelial cells have the least permeable capillaries in the entire body thanks to tight junctions.  The tight junctions literally sew the cell membranes together and don’t allow things to pass through.  They prevent most blood-borne toxins from entering the brain but it’s not an absolute barrier because fat soluble molecules can easily pass such as alcohol, nicotine and anesthetics.  The reason for that is because a cells plasma membrane is made of phospholipids and so anything that is fat soluble (nonpolar) can still pass through. 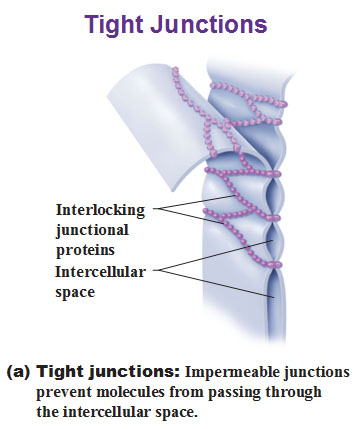 I don't know about you but nothing gets me fired up more than working on my abs. It's a unique muscle group that is utilized in every exercise and making it … END_OF_DOCUMENT_TOKEN_TO_BE_REPLACED

In this day and age most people are working from home and struggling to find the balance between stagnation and moving to stay fit. This program was developed … END_OF_DOCUMENT_TOKEN_TO_BE_REPLACED

I have three premium flexibility programs that I offer and many of you have been clamoring for a bundle-package, so here it is! You could now buy the … END_OF_DOCUMENT_TOKEN_TO_BE_REPLACED

This training routine is focused largely on increasing strength and muscle mass (aka muscular hypertrophy). If I had to sum up the routine in one fell swoop I … END_OF_DOCUMENT_TOKEN_TO_BE_REPLACED

For anyone who wants better shoulder health, shoulder flexibility, a looser upper back and improved posture, this program takes all the guess work out of it to … END_OF_DOCUMENT_TOKEN_TO_BE_REPLACED

I've created this hip flexibility program for those that would like to improve their flexibility in an efficient manner, with a follow along video that only … END_OF_DOCUMENT_TOKEN_TO_BE_REPLACED

Looking for a simple and straightforward bodyweight-oriented strength training routine that doesn't take too much time? You're not the only one! A survey I … END_OF_DOCUMENT_TOKEN_TO_BE_REPLACED

This is for anybody who wants to get strong and have fun with a gymnastics-inspired routine. It is highly bodyweight-exercise oriented (no external weights) and … END_OF_DOCUMENT_TOKEN_TO_BE_REPLACED