As we know already, the fluid inside a cell is called the intracellular fluid and all living cells have to be surrounded by fluid and we call that the extracellular fluid.  The phospholipid bilayer that makes up the cell membrane is made of phospholipids that are commonly depicted like a balloon with two strings.  As we mentioned previously, the balloon part is phosphate that’s hydrophilic and the two strings are hydrophobic and hate water.  We see that the balloon part is facing the tissue fluid outside the cell and the inner part of the cell.  So the phosphate is always facing water.

Analogy: Imagine the phospholipid bilayer as an oreo cookie.  Imagine the lipids are the creamy filling, a double layer of fat, and since fats and water don’t mix, this effectively creates a partition between the two.

There are globular proteins in between this bilayer that help transport things in and out of the cell.

1. Ion channels. Ion channels are a very narrow tube-shaped protein that help establish a tiny pore in the cell membrane.  They are only large enough to allow an ion to go through.  Each ion channel is specifically for specific ions (Na+, K+, Cl–, Ca+2, etc).  They can open and close and are very important in understanding the rest of physiology.  Some of you may have heard of a class of drugs called “calcium [ion] channel blockers” which are important in regulating blood pressure, for example.

2. Transporter or Carrier Proteins.  They are embedded in the cell membrane to help transport glucose and amino acids across the membrane.  They are too large to go through ion channels.  Remember a glucose molecule (C6H12O6) is 24 atoms large, so it needs help getting across and amino acids are even bigger than that.  When energy is required to transport/carry a protein across, that’s known as active transport.  When no energy is needed, that’s called passive transport.  Amino acids are actually transported by active transport.  Interestingly, the transport of glucose across a cell membrane uses a transport protein but doesn’t require ATP, so it’s called passive transport, or alternatively, facilitated diffusion.

3. Enzymes are chemicals that catalyze biochemical proteins.  These are found in the cell membrane as well.

5. Receptor site proteins (this is the most important part).  The receptor sites are always found on the outer cell membrane surface (unless it’s for a protein hormone, which we’ll discuss soon).  This is where hormones and neurotransmitters and other chemicals attach to the surface of the cell.  We know hormones affect the activity of the cells.  These receptor sites are how they affect the cells.  These signal molecules (hormones, neurotransmitters, chemicals) are called ligands. (Etymology of ligand: From Latin ligandus, gerundive of ligare ‘to bind’.)

Remember there are two classes of hormones.  Steroid hormones and protein hormones.  What are the differences between the two?  You could swallow a steroid hormone but not a protein hormone.  Any protein you swallow will be broken down into amino acids, so you have to inject it.  In contrast a steroid, like cholesterol, can be swallowed.  Now we’re going to see another difference between then.  Since steroid hormones are chemically like cholesterol, they easily diffuse across the cell membrane because the cell membrane is fatty in nature.  The receptor sites for steroid hormones are floating inside the cell (in the intracellular fluid) because they easily diffuse in it while any other neurotransmitter or hormone receptor is on the outer surface of the cell.

Let’s see how this actually works by reviewing the following diagram.  Look below for the text to help you follow it. 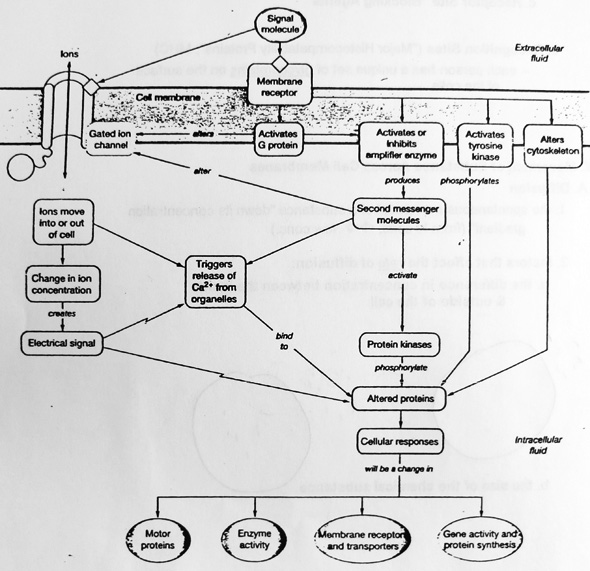 What we’re looking at diagrammatically is the cell membrane with an ion channel which is a protein in the cell membrane.  Then we see a membrane receptor so that’s a receptor site protein.  It shows a signal molecule (anything that activates a receptor site) attaching to it.  There are receptor sites on many cells of our body called acetylcholine (ACh) receptor sites (called that because there’s a neurotransmitter called acetylcholine (ACh)).  When ACh attaches to the receptor site protein, it activates it.  You’ll notice it says it activates a G-protein.  A g-protein is a connecting protein, like a slinky, that connects to other parts of the membrane to activate them.  This g protein is connected to this ion channel.  This ion channel is specifically a sodium (Na+) ion channel.  Na+ ion channels are usually closed but when this ACh activates the g-protein, it opens the sodium ion channel and as the sodium ions flow into the cell, that’s going to lead to an action potential (we’ll discuss more in the future) in the cell because the influx of sodium ions creates an electrical current.

In another example, when epinephrine (Adrenaline) activates an adrenaline receptor site and activates a g-protein it activates or inhibits an amplifier enzyme and that leads to a series of enzymatic reactions.

Another example, way on the far right, you see it says “Alters cytoskeleton.”  Remember some proteins, such as linker proteins, face the inside of the cell.  Some chemicals activate receptor sites to g-proteins to linker proteins which then affect the cytoskeleton.  This may be called by the term chemotaxis which means a movement (taxi) in the direction of where chemicals (chemo-) are coming from.   White blood cells are attracted toward the infected or injured areas because of chemicals.  Cytokines are released from the infected/injured areas that attract them and that’s called chemotaxis.

Let’s say an example where our agonist (or primary ligand or signal molecule) is epinephrine (adrenaline) which attaches and activates an androgenic receptor site.  Incidentally all of us know that epinephrine speeds up the heart rate, raises blood pressure and increases electrical activity in your brain.  If you give someone epinephrine, a single injection effect would be over in 5-10 minutes because there are enzymes in our body that break down hormones and neurotransmitters and any naturally produced chemicals in our body.  If you want the effect to last longer than a few minutes, you either have to connect someone into an IV drip line to keep giving them that effect or give them a drug that MIMICS the effect of epinephrine, called a MIMETIC (or an agonist).

A mimetic (ago­nist) mimics the structure of another chemical.  Amphetamines are mimetics of epinephrine, it’s a syn­thetic drug that acti­vates the same recep­tor site as epinephrine and instead of tak­ing min­utes for the enzymes to break them down, it takes hours.  Usually in medicine you want the medicine to last hours and not minutes.

An antagonist (or blocker) will block receptor activity.  Beta-blockers, for example, are antagonist drugs that will block the adrenaline (androgenic) receptor sites.  A specific one is called atenolol (Tenormin) and is a classic beta-blocker.  Who do they give these to?  Who would want the adrenaline to be blocked?  People who have high blood pressure and are stressed.

6. Recognition sites aka cell identity markers aka major histocompatibility proteins (MHC’s).  These are glycoproteins.  Glyco-means sugar so these are proteins with sugars attached to them.  Each person has a unique set of glycoproteins on the surface of the cells.  These recognition sites are always on the outside surface and are different from receptor sites.  These identify which cells belong to us and which ones dont.  WBC’s can recognize which cells are your and which ones are foreign due to these recognition sites.  There are no two people on the planet that have the same combination of recognition site (glycoproteins) unless you have an identical twin or a clone.  If WBC’s happen to bump into a bacteria, it clearly knows this cell doesn’t belong here and destroys it.

Not only will they attach and destroy a foreign cell, but also a foreign human cell.  This is the problem that occurs with organ transplants.  Before they even try a transplant, they have to look for a close match and what they mean is a close match of these recognition sites.  If they can’t find a close match then you’re out of luck.  However even when they find a close match, the immune system knows those don’t have the same identity cells and will undergo organ transplant rejection.  Immunosuppressant drugs will have to be given to suppress the immune system by lowering their white blood cell count.  The most common drugs that do this are corticosteroids. An example of a corticosteroid is prednisone.  It’s not uncommon for someone who is taking prednisone to die of other things, such as viral pneumonia.  Sometimes our WBC’s attack our own cells and that’s known as an auto-immune disease because the cells in the body are lacking proper recognition sites and it ultimately comes down to a problem with the DNA.  All the focus on modern biology is increasingly on genetics for these reasons and more.

Now that we’ve talked all about the different kinds of proteins that could exist in the cell membrane, we’re going to talk about the movement of substances across them in great detail next.

Do you have questions in regards to your training, diet or habits in general? I bet you do because I get messages every single day from people looking for … END_OF_DOCUMENT_TOKEN_TO_BE_REPLACED

Looking for a simple and straightforward bodyweight-oriented strength training routine that doesn't take too much time? You're not the only one! A survey I … END_OF_DOCUMENT_TOKEN_TO_BE_REPLACED

In this day and age most people are working from home and struggling to find the balance between stagnation and moving to stay fit. This program was developed … END_OF_DOCUMENT_TOKEN_TO_BE_REPLACED

I have three premium flexibility programs that I offer and many of you have been clamoring for a bundle-package, so here it is! You could now buy the … END_OF_DOCUMENT_TOKEN_TO_BE_REPLACED

For anyone who wants better shoulder health, shoulder flexibility, a looser upper back and improved posture, this program takes all the guess work out of it to … END_OF_DOCUMENT_TOKEN_TO_BE_REPLACED

I don't know about you but nothing gets me fired up more than working on my abs. It's a unique muscle group that is utilized in every exercise and making it … END_OF_DOCUMENT_TOKEN_TO_BE_REPLACED

I've created this hip flexibility program for those that would like to improve their flexibility in an efficient manner, with a follow along video that only … END_OF_DOCUMENT_TOKEN_TO_BE_REPLACED

For those who have poor flexibility, tight hamstrings and want a simple program that will help them to get looser in a gentle, non-painful manner. In this … END_OF_DOCUMENT_TOKEN_TO_BE_REPLACED