Diffusion is the spontaneous movement of a substance down its concentration gradient from higher to lower concentration.  If you have a bottle of perfume and take the cap off.  The perfume molecules will waft out and diffuse into the air where there is a lower concentration of them.  All atoms and molecules are in motion, the only way you could stop all motion is to cool things down to absolute zero (-273.15 C or 0K).  On the bottom of b25 , look at the diffusion thing and read it.

Factors that affect the RATE of diffusion

1. Difference in concentration between the inside and outside of the cell.  The bigger the difference between concentrations, the diffusion will be faster.

2. The size of the chemical substance.  O2 is two atoms. Glucose is 24 atoms big.  Protein is massive.  Oxygen can easily diffuse across a cell membrane.  Sugar can kind of, that’s why it’s assisted by a transporter protein to facilitate it.  The proteins don’t move at all.

4. Whether the chemical substance is water-soluble or lipid soluble.  The lipid soluble goes through faster because the cell membrane is phospholipids and can easily diffuse through a fatty membrane.

The effect of osmosis on cells

Osmosis is simply the diffusion of water.  Anytime water flows in or out, it’s called osmosis.  The water flows to wherever there is more solute. 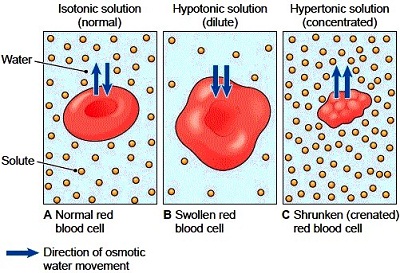 1. The cytoplasm of a cell is 80% water, but not completely.  Anything that’s not water are called solutes, such as electrolytes.  If we surround the cell with a fluid that’s similarly 80% water and 20% “other stuff” on the outside of the cell.  The “other stuff” don’t even have to be the same things as the inside of the cell.  With osmosis we only care about the concentration of the water molecules.  This fluid surrounding the cell is said to be isotonic. (Iso- means same and -tonic means tension)

2. Imagine another scenario with the same cell but this time it’s surrounded with 100% distilled water.  Osmosis will occur because water will flow inside the cell.  The cell will swell until it ruptures and when it pops it’s called lysis.  When a red blood cell pops it’s called hemolysis.  It would not be a good idea to inject distilled water into their blood.  This is known as a hypotonic solution because it’s low in solute. (Mnemonic: When you place a cell in a hypotonic solution, it swells up like a hippo.)

3.  Imagine we place the same cell in a concentrated salt solution with 20% water only.  Water will flow out of the cell causing it to shrink and that’s called crenation.  This solution is known as a hypertonic solution.

In any situation when things will be injected will be an isotonic solution.  Always remember, the water flows wherever there is more solute, like when someone puts salt on a snail, the snail dies because the water goes to the salt and the snail gets dehydrated (its cells crenate due to the hypertonic solution).

Facilitated diffusion: Some larger molecules, such as glucose, need help by way of a transport protein to help carry glucose into a cell and this requires no energy.

Primary Active Transport: H+, Na+, Ca+2 all utilize ATP to force these things across the membrane.  There is one major distinction between active transport and facilitated diffusion other than one needing energy and the other not.  Active transport always causes a molecule to be forced to move from a lower concentration to higher, which it does not want to naturally do.  The most important of all transport pumps are the one that uses ATP to simultaneously force K+ (potassium ions) into the cell and Na+  (sodium ions) out of the cell.  This is famously called the Sodium-Potassium protein pump.  Active transport processes account for about 40% of the energy used in the body so this is a major thing in case you thought this wasn’t important. 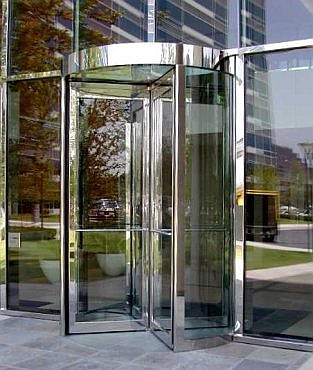 Secondary active transport: These is when one chemical is being forced in or out of the cell and another chemical just sort-of follows through.  The two terms used for this is SYMPORT and ANTI-PORT.  Sym- means together and two chemicals are going together in the same direction.  Anti-port is when one chemical is forced in one direction and another is passively going in the other direction.

You see a linear line labeled diffusion.  Then we have another line labeled mediated transport which refers to active transport.  To help us visualize what this graph is trying to show: Imagine we have a cell and we were to increase the concentration of a chemical (solute) outside a cell (extracellular).  We want to see what affect this increase in solute affects the movement of it into the cell.  We always begin describing a graph with “As the…” and we look at the x-axis first.  In the case of diffusion, as the extracellular solute concentration begins to increase, the rate of diffusion into the cell increases linearly.  In the case of active transport, you’ll notice that as we increase the concentration, the rate of transportation reaches a maximum flux limit.

Phago- means to eat and this is when the cell swallows something into a food vacuole and it’s aka endocytosis.  ATP energy is used to engulf these substances.

The exact opposite is called secretion or exocytosis (exo- as in something being external/toward the outside) and this also requires energy in the form of ATP.

On a final note… our needs as organisms actually reflect the needs of our cells.

The reason why we have lungs is that our cells need oxygen for cellular respiration.  We also need lungs to get rid of carbon dioxide to get rid of this waste product.  The reason we need kidneys is to get rid of ammonia, urea and uric acids.  If cells weren’t generating these waste products you wouldn’t need kidneys.  The reason you need a digestive system is so that these things will get absorbed by your body when you eat food.  Sounds simple enough but it’s just a reminder that everything is there for a reason and that’s why you must learn all of this.

I have three premium flexibility programs that I offer and many of you have been clamoring for a bundle-package, so here it is! You could now buy the … END_OF_DOCUMENT_TOKEN_TO_BE_REPLACED

I've created this hip flexibility program for those that would like to improve their flexibility in an efficient manner, with a follow along video that only … END_OF_DOCUMENT_TOKEN_TO_BE_REPLACED

For those who have poor flexibility, tight hamstrings and want a simple program that will help them to get looser in a gentle, non-painful manner. In this … END_OF_DOCUMENT_TOKEN_TO_BE_REPLACED

I don't know about you but nothing gets me fired up more than working on my abs. It's a unique muscle group that is utilized in every exercise and making it … END_OF_DOCUMENT_TOKEN_TO_BE_REPLACED

In this day and age most people are working from home and struggling to find the balance between stagnation and moving to stay fit. This program was developed … END_OF_DOCUMENT_TOKEN_TO_BE_REPLACED

This is for anybody who wants to get strong and have fun with a gymnastics-inspired routine. It is highly bodyweight-exercise oriented (no external weights) and … END_OF_DOCUMENT_TOKEN_TO_BE_REPLACED

Looking for a simple and straightforward bodyweight-oriented strength training routine that doesn't take too much time? You're not the only one! A survey I … END_OF_DOCUMENT_TOKEN_TO_BE_REPLACED

For anyone who wants better shoulder health, shoulder flexibility, a looser upper back and improved posture, this program takes all the guess work out of it to … END_OF_DOCUMENT_TOKEN_TO_BE_REPLACED