The bike you’re about to see was an idea originally started and created in 2008 by a German guy named Gunter Mai who logged over 20,000km on the machine for a couple years and it weighed at around 3.2kg.  Early in 2011 he parted out the bike and sold each piece individually around the world.  Some of the key parts were bought by some guy in Colorado who commissioned Jason Woznick of Fairwheel Bikes in Tucson, Arizona to create even lighter parts to finish a new build of it.

Every part on the bike is completely custom made and cannot be bought unless you wanted it made specially for you.  Even if you did want it made for you, you would have to contact manufacturers who already make the lightest parts and then ask them to make a custom piece for you that is even lighter.  Woznick guessed that if you tried to recreate the effort put into this bicycle, it would cost you at least $45,000.

As a result, this new machine weighs in at 2.7kg or just about 6.0lbs.  I can’t imagine what it would be like to hold such a large item that weighs two pounds lighter than a gallon of milk, but it must feel like nothing!  Even the carbon fiber used in the wheels isn’t readily available (even if you have the cash for it) as it’s a special grade that was gotten from some Formula One guys.

As a result of some of the custom work, this has allowed manufacturers to push their limits.  Both of the prototype Dash hubs will actually be going into mass production this year, for example.  Anyway, enjoy the pictures as there isn’t quite a bike as exotic as this in all its minimal glory.

Credit for photos and info: Nick Salazar from TriRig.com

To give you an idea of how light this bicycle is relative to other bikes on the road. The bicycle you have probably weighs 20lbs pounds or more.  To be under the 20lb mark, you probably have spent some “serious” money as each pound you shave off below 20lbs becomes exponentially more expensive, to the point where people compare grams of components.  The Union Cycliste Internationale (UCI), which is the governing body for most of the pro races around the world, has a minimum weight limit of 6.8kg (about 15lbs). So when you see those $9,000 bicycles in the Tour De France, they are about three-times heavier than this bicycle. Of course there’s more to a bicycle’s performance than its weight though. A lot of the cost doesn’t go into making them lighter but in making them handle better, be stiffer for efficient power transfer, shift more smoothly, be reliable, have less rolling resistance and most of all to reduce aerodynamic drag. As you ride faster, aerodynamics are much more important than weight so unless your entire race is uphill, weight isn’t that important, but this is pretty amazing stuff anyway, considering it’s three times lighter than the bikes the pro’s ride with.

Enjoyed this post? Hell yea you did! It’s cause BICYCLES ARE THE BOMB!

Don’t you wish commuting by bicycle was more practical though? I know we often struggle with carrying many items and have to limit what we take with us. And if we take a backpack it makes our traps all knotted up and our back sweaty.  The solution? These Ortlieb Pannier Bags. They changed my (cycling) LIFE because it made commuting practical. The way they come on and off the bike is so ridiculously easy.

See for yourself!  Here’s a video of me demonstrating their awesomeness.

More info in this blog post: The Magic of Ortlieb Backrollers 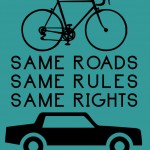 Please share this with every cyclist AND driver you know: How To Ride Your Bicycle Safely On The Streets

Education and a sense of personal responsibility is key to our harmony.

For anyone who wants better shoulder health, shoulder flexibility, a looser upper back and improved posture, this program takes all the guess work out of it to … END_OF_DOCUMENT_TOKEN_TO_BE_REPLACED

For those who have poor flexibility, tight hamstrings and want a simple program that will help them to get looser in a gentle, non-painful manner. In this … END_OF_DOCUMENT_TOKEN_TO_BE_REPLACED

I've created this hip flexibility program for those that would like to improve their flexibility in an efficient manner, with a follow along video that only … END_OF_DOCUMENT_TOKEN_TO_BE_REPLACED

This is for anybody who wants to get strong and have fun with a gymnastics-inspired routine. It is highly bodyweight-exercise oriented (no external weights) and … END_OF_DOCUMENT_TOKEN_TO_BE_REPLACED

In this day and age most people are working from home and struggling to find the balance between stagnation and moving to stay fit. This program was developed … END_OF_DOCUMENT_TOKEN_TO_BE_REPLACED

I have three premium flexibility programs that I offer and many of you have been clamoring for a bundle-package, so here it is! You could now buy the … END_OF_DOCUMENT_TOKEN_TO_BE_REPLACED

This training routine is focused largely on increasing strength and muscle mass (aka muscular hypertrophy). If I had to sum up the routine in one fell swoop I … END_OF_DOCUMENT_TOKEN_TO_BE_REPLACED

I don't know about you but nothing gets me fired up more than working on my abs. It's a unique muscle group that is utilized in every exercise and making it … END_OF_DOCUMENT_TOKEN_TO_BE_REPLACED