Cyclists fare best when they act and are treated as drivers of vehicles. – John Forester 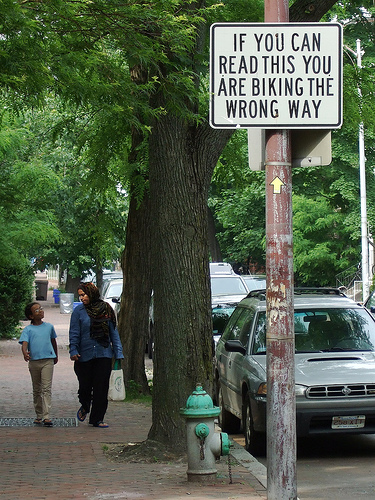 Seriously now, why are you riding the wrong way against all the traffic?  It’s people like you who make the rest of us law-abiding cyclists look bad!

It’s great you’re riding your bike, I love to ride mine too, but please don’t make up your own god damn rules.  You expect every other driver, cyclist and pedestrian to figure out what your new rules are that you just made up?

So why are you riding the wrong way?  Because you don’t like it when you can’t see the cars coming from behind you?

Listen, when cars are pulling out of driveways, they are usually about to make a right turn, because that’s the direction where traffic is going and they want to merge.  So they are going to look to their LEFT until it’s clear.

They’re not looking to their RIGHT because cars aren’t coming from that direction! So if you keep riding the wrong way, you’re going to get run over.

Then you’re going to get pissed at the driver?  BITCH, PLEASE.  Just because you’re on a bicycle doesn’t mean that if you get hit by a car, that it was automatically the motorists fault.

YOU’RE MAKING THE REST OF US CYCLISTS LOOK BAD. Every time we see a red-light runner, a traffic-weaver, or a moron riding the wrong way on the street, it just adds to the stereotype that all cyclists ride erratically.  So please, learn how to ride your bicycle safely (and confidently) on the street so we could all get along.

In this day and age most people are working from home and struggling to find the balance between stagnation and moving to stay fit. This program was developed … END_OF_DOCUMENT_TOKEN_TO_BE_REPLACED

I have three premium flexibility programs that I offer and many of you have been clamoring for a bundle-package, so here it is! You could now buy the … END_OF_DOCUMENT_TOKEN_TO_BE_REPLACED

For anyone who wants better shoulder health, shoulder flexibility, a looser upper back and improved posture, this program takes all the guess work out of it to … END_OF_DOCUMENT_TOKEN_TO_BE_REPLACED

I don't know about you but nothing gets me fired up more than working on my abs. It's a unique muscle group that is utilized in every exercise and making it … END_OF_DOCUMENT_TOKEN_TO_BE_REPLACED

I've created this hip flexibility program for those that would like to improve their flexibility in an efficient manner, with a follow along video that only … END_OF_DOCUMENT_TOKEN_TO_BE_REPLACED

For those who have poor flexibility, tight hamstrings and want a simple program that will help them to get looser in a gentle, non-painful manner. In this … END_OF_DOCUMENT_TOKEN_TO_BE_REPLACED