If you were standing around and a car behind you blasts the horn without warning, would you be startled?  Yep!  Would you shit your pants?  Maybe!

Now imagine the same scenario, except this time you’re riding your bicycle on the street, and all of a sudden the car behind you blasts the horn. It’s not just startling but terrifying and incites a wide range of emotions.

Listen up Mister Motorist: When a cyclist is in the middle of the lane, it’s not because they hate you.  They are simply making it obvious that this lane is too narrow for you to share.  As a licensed driver, it would behoove you to understand why cyclists often can’t simply ride furthest to the right to appease you.

Only through education and a sense of personal responsibility will
cyclists and motorists ride together in harmony in the United States.

I often wonder: How lazy are asshole drivers that keep honking at me?

So there’s a cyclist, pedaling their hearts out, and you’re bitching at them because they’ve slowed you down by two seconds in your gas-powered vehicle?  Do you honk at big rigs and school buses to move out of “your” way too?  How is a cyclist any different?  Sidewalks are no place for a cyclist.  What’s worse is that these same people are often so myopic that they don’t even realize we’re both coming up to a red light anyway.  Shit for brain drivers, with their transmission in drive but their brains in neutral.

Whoever said we ‘drive cars’ and ‘ride bikes’ was obviously never a cyclist.

In a car, you’re essentially sitting comfortably, pressing a gas pedal and riding in a nice big car.  A cyclist, on the other hand, is literally moving the bike forward with the power of their legs. They are truly driving the bicycle forward with their muscles.  So relatively speaking, you’re not driving a car, as much as your English teacher would have you believe. 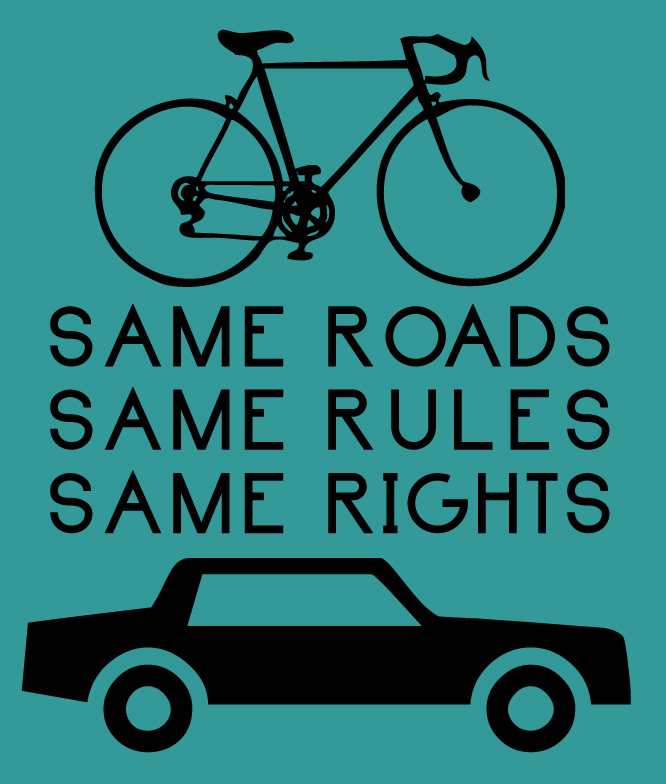 In conclusion, you’re a fucking asshole for honking at me.  I’m not a second class citizen and you don’t own the road anymore than anyone else.  I don’t belong on the sidewalk and if you think I do then maybe it’s time for you to take your drivers test again.  Cyclists belong on the street. They are not getting in the way of traffic, they are traffic.  Get used to it.  I hope that provides some perspective. Thanks for reading and please share this to help everyone get some perspective.

Hate my rant?  Think I’m unfair, unjust and one sided against drivers? Here’s a rant on cyclists who ride on the wrong side of the street and make up their own rules willy nilly: Hey Asshole! Yeah You, The One On The Bike!

Do you have questions in regards to your training, diet or habits in general? I bet you do because I get messages every single day from people looking for … END_OF_DOCUMENT_TOKEN_TO_BE_REPLACED

Looking for a simple and straightforward bodyweight-oriented strength training routine that doesn't take too much time? You're not the only one! A survey I … END_OF_DOCUMENT_TOKEN_TO_BE_REPLACED

In this day and age most people are working from home and struggling to find the balance between stagnation and moving to stay fit. This program was developed … END_OF_DOCUMENT_TOKEN_TO_BE_REPLACED

I have three premium flexibility programs that I offer and many of you have been clamoring for a bundle-package, so here it is! You could now buy the … END_OF_DOCUMENT_TOKEN_TO_BE_REPLACED

For anyone who wants better shoulder health, shoulder flexibility, a looser upper back and improved posture, this program takes all the guess work out of it to … END_OF_DOCUMENT_TOKEN_TO_BE_REPLACED

I don't know about you but nothing gets me fired up more than working on my abs. It's a unique muscle group that is utilized in every exercise and making it … END_OF_DOCUMENT_TOKEN_TO_BE_REPLACED

I've created this hip flexibility program for those that would like to improve their flexibility in an efficient manner, with a follow along video that only … END_OF_DOCUMENT_TOKEN_TO_BE_REPLACED

For those who have poor flexibility, tight hamstrings and want a simple program that will help them to get looser in a gentle, non-painful manner. In this … END_OF_DOCUMENT_TOKEN_TO_BE_REPLACED