This is the next building block that comes after my tips on driving efficiently on the freeway/highway. I’m trying to share everything I know to transform driving from a wound up, stressful experience to an efficient and relaxing one. 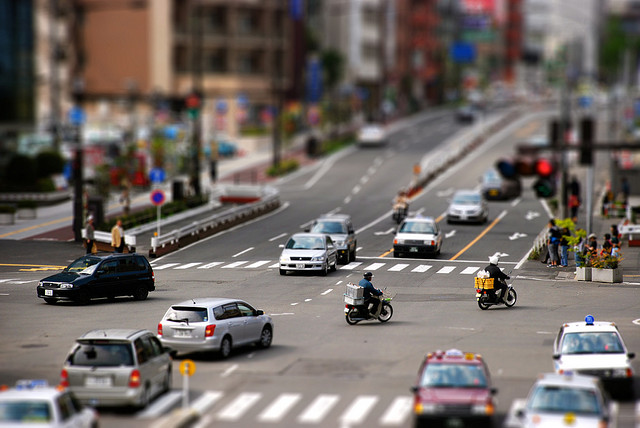 After driving in Los Angeles all my life, one of the most congested cities in the world, it wasn’t until I started riding my bicycle on the streets that I realized how inefficient drivers (including me!) were generally behaving on the streets.  When I would be on my bike, I caught on really quickly that if I were coming up to a RED light, there was no need to pedal anymore.   I could simply stop pedaling and coast toward the intersection.  Why waste energy pedaling up to a red light?  So that I could arrive at the intersection faster only to come to a stop?

Funny enough, as I would coast toward a red light, cars would pass me and I could clearly hear their engines often accelerating toward the intersection as if they were blind to the fact that they have to brake very soon.  When I hopped back into my car, I realized that many of these cycling concepts are directly translatable to improving gas mileage and efficiency!

1. It’s all about Average Speed, not “Top” speed

The time it takes to get to your destination does not depend on you hitting any particular top-speed.  It is all about your average speed because you are constantly at the mercy of the traffic lights on the streets.  On the freeway, you’re at the mercy of other drivers getting in “your” way. (It’s not your road btw, we’re all in this together.)  Even if you are in the left lane (the ‘faster’ lane), you’re most probably just speeding to get to a red light faster.

2.  Your car uses the most fuel going from 0-25mph, so minimize the number of stops.

A car engine uses the most fuel per distance covered when it’s accelerating from 0-25mph.  To maximize efficiency you need to minimize the number of stops you make.  You can do this by looking ahead, be aware whether the light is red or green and regulate your speed accordingly.  Please remember that a car engine idling at a red light is getting zero mpg.

3. Stop following others like sheep and look BEYOND the car in front of you!

There are traffic signals at nearly every block and people drive as if they don’t see the red lights in front of them.  And that’s because they DON’T!  Most people are automatically following the actions of the car that’s directly in front of them.

Instead, look far ahead and note the following:

The point is, don’t be myopic.  Leave some distance between you and the car in front of you so you don’t have to immediately brake when they brake.  Don’t press the gas immediately if they press the gas.  Sounds ridiculous in writing how sheepish we are, but this is the reality.

A lot of people seem to either be pressing the gas or pressing the brake.  Coasting means you are not pressing the gas and not pressing the brakes too.  When you see it’s a red light far up ahead, just coast and and let the car slow down gracefully so that it will take longer to arrive at the red light.  Ideally, by the time you get to the intersection, the light will have turned green and you wouldn’t have to accelerate up again from a fresh start.  The slower you drive, the smoother your ride will be with less stops.

Obviously you have to consider the people behind you and not do it too far ahead or else the drivers behind you will go APE-SHIT-BANANAS cause they’re so stressed out anyway.  But the point is, don’t mash on the brakes 50 feet before the traffic stop.

Note: This may sound like a REALLY simple thing but I OFTEN see people accelerating up to red lights all the time.

If the posted speed limit is 35mph, almost everybody seems to be accelerating until they reach 45mph.  What’s the point of driving 45mph if you’re going to come to the same red light as the person who was driving 35mph?

Traffic signals are the great equalizer, constantly penalizing and ridiculing those who speed.

Everybody speeds beyond the speed limit because they think it’s going to help them get to their destination faster but in reality it does nothing but waste more gas, forces you to brake harder and come to a stop faster. Conversely, if you are looking ahead, driving slower and taking longer to get to red lights, you will actually have to spend less time at the red light, less time idling and actually increase your gas mileage dramatically.

An incredible side effect of driving efficiently: Less encounters with police officers

If you limit yourself to 55-60mph on the freeway and 35mph on the streets, you’ll never get a speeding ticket and you won’t give any reason to attract officers attention.  Cops are trained to notice people who are speeding.  You are literally invisible to them if you are a slow poke, obeying all the lights and just moseying along in the slow lane.

These little things add up to make a big difference in smoothing out your entire ride.  Leaving some distance from the car in front of you and looking ahead to time the lights makes everything smoother, literally.  And don’t forget simple things like making sure your tires are properly inflated! (They probably aren’t and are reducing your fuel efficiency probably.)  If you enjoyed this article, check out the one about driving efficiently on the freeway!

For anyone who wants better shoulder health, shoulder flexibility, a looser upper back and improved posture, this program takes all the guess work out of it to … END_OF_DOCUMENT_TOKEN_TO_BE_REPLACED

This training routine is focused largely on increasing strength and muscle mass (aka muscular hypertrophy). If I had to sum up the routine in one fell swoop I … END_OF_DOCUMENT_TOKEN_TO_BE_REPLACED

I have three premium flexibility programs that I offer and many of you have been clamoring for a bundle-package, so here it is! You could now buy the … END_OF_DOCUMENT_TOKEN_TO_BE_REPLACED

In this day and age most people are working from home and struggling to find the balance between stagnation and moving to stay fit. This program was developed … END_OF_DOCUMENT_TOKEN_TO_BE_REPLACED

For those who have poor flexibility, tight hamstrings and want a simple program that will help them to get looser in a gentle, non-painful manner. In this … END_OF_DOCUMENT_TOKEN_TO_BE_REPLACED

I don't know about you but nothing gets me fired up more than working on my abs. It's a unique muscle group that is utilized in every exercise and making it … END_OF_DOCUMENT_TOKEN_TO_BE_REPLACED

This is for anybody who wants to get strong and have fun with a gymnastics-inspired routine. It is highly bodyweight-exercise oriented (no external weights) and … END_OF_DOCUMENT_TOKEN_TO_BE_REPLACED

I've created this hip flexibility program for those that would like to improve their flexibility in an efficient manner, with a follow along video that only … END_OF_DOCUMENT_TOKEN_TO_BE_REPLACED