Thyrotropin stimulates your thyroid gland to secrete tetraiodothyronine (aka Thyroxin, and it’s tetra- because it has 4 iodine atoms) and a smaller amount of triodothyronine (tri- because it has 3 iodines). These are commonly referred to as T4 and T3. Thyrotropin mostly causes the thyroid gland to secrete T4 and smaller amounts of T3. T3 is more potent but we release less of it.

In other words, the factors that cause the release of T4 and T3 are Thyrotropin (aka TSH; Thyroid Stimulating Hormone) from the (anterior lobe of the) pituitary gland (the adenohypophysis).

The model of ALL tropic hormones is a NEGATIVE FEEDBACK LOOP. 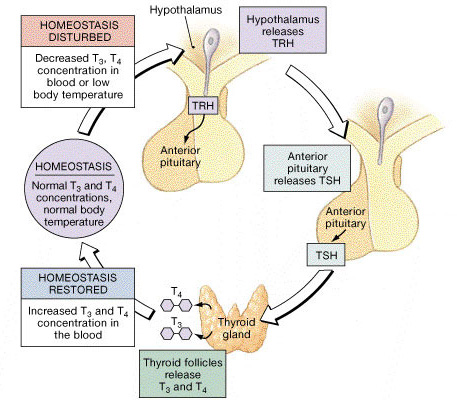 See where it says hypothalamus, the hypothalamic neurons are releasing Thyrotropin Releasing Hormone (TRH). The TRH is carried down to the adenohypophysis by the hypothalamic portal veins where it releases TSH (Thyrotropin aka Thyroid Stimulating Hormone) and released into the blood stream where it stimulates the thyroid gland to release Thyroxin (T4) and T3 and as it increases in the blood stream, we go back to homeostasis.

TRH is what is stimulating the release of Thyrotropin, but something not included in that picture above is that cold temperatures and hypoglycemia also stimulate the release of thyrotropin, which in turn stimulates the thyroid to release T4/T3. We went over this when we talked about the regulation of body temperature. We said that places like Minnesota, where it’s fucking-freezing, are called meat and potatoes country, because the cold is raising their metabolism to produce more heat and making them hungrier. Contrast that with summer, when people rather eat lighter foods like salads and don’t have as much of an appetite when it’s scorching hot.

How is this controlled or regulated?

By a negative feedback loop. Most of us don’t have hypo/hyperthyroidism, because it’s under a homeostatic reflex. As the thyrotropin stimulates the thyroid to release more thyroxin, the levels of thyroxin go up in the bloodstream and that is going to inhibit further release of TSH from the the cells of the adenohypophysis and the TRH from the hypothalamic neurons. This makes sure the thyroid gland doesn’t oversecrete thyroxin

Remember how all NT are enzymatically broken down because if we don’t then the effects can go on for the rest of your life? Where most hormones are broken down is your liver. The reason your liver needs to break it down is because… consider the following: Remember how Oxytocin causes a woman to go into labor? If oxytocin isn’t broken down, she’s going to stay in labor for the rest of your life. That doesn’t sound like a good idea. So what if she gets pregnant again? The body will make more oxytocin and so on.

So the source of Thyroxin (T4) and T3 is the thyroid gland and interestingly they increase both your anabolic and catabolic metabolic rates. The catabolic process being the speeding up of cellular respiration and incidentally a byproduct of cellular respiration is heat (60% of the energy is given off as heat). Thyroxin is also needed for growth and development as well (that’s an anabolic process).

A deficiency of thyroxin (T4) in an adult is hypothyroidism. It’s one of the most common types of clinical problems. Since thyroxin is tied into metabolism, people with hypothyroidism are tired all the time, they are cold all the time, they can gain weight easily because instead of breaking down the food they eat, they store it on their body. There’s also a slow H.R. and low B.P. Everything is slower than usual.

A deficiency of thyroxin(T4) in children is called cretinism and it’s VERY serious because it doesn’t only affect cellular respiration but also growth and development so they would be physically short and also mentally retarded. That’s called a cretin.

Something you may or may not know in most states today (California was the leader for this): When a baby is born, blood tests are MANDATORILY REQUIRED BY STATE LAW and the blood is usually drawn from the bottom of the foot. They are need to be tested for hypothyroidism. If the baby has hypothyroidism, Synthroid must be taken otherwise they would develop into a cretin (mental retardation and physically short).  A number of tests are required by law and all of the tests are basically problems that would result in mental retardation and are all preventable. Two other tests are for PKU and Galactosemia as both will result in mental retardation but both are PREVENTABLE by putting that infant on a special artificial diet (no phenylalanine or galactose in it). It would be tragic for a baby to become mentally retarded if it was totally preventable. They don’t require a test for cystic fibrosis for example, because there’s nothing you could do about that disease.

You’re looking at the most common blood test. We’ll understand 70% of what’s written there by the time we are done with this series.

Based on your understanding of the negative impact loop, which type of hypothyroidism do they have? Primary or secondary hypothyroidism? They have primary hypothyroidism and this pattern is the MOST common. It’s rarer to have a problem with the pituitary. The TSH is super high because the pituitary gland is trying to get the damned thyroid gland to release some damn thyroxin by secreting more and more TSH and it’s still not working. So the pituitary is doing exactly what you would want it to do and it’s not inhibited.

Look at this lab form. See how they measure the T3 and T4 level. It’s given as a percent. The normal range is 35-45% and it’s ever so slightly outside the range, not enough to do anything. T4 is 6.9 and that is entirely within the normal range of 5.5-11.5ug/dl. This patient might have said I’m low on energy, cold all the time, etc. So they ran the tests to see if they have hypothyroidism and they ran the tests and turns out there’s no reason to be put on Synthroid (a brand name of synthetic thyroid medication).

They had to develop a way to measure molecules on such a tiny concentration level. In the 1970’s, A woman named Rosalyn Yalow, professor of Columbia, developed the technique used today called RIA and it stands for Radioimmunoassay. When you see the word “Immuno,” you think of immunology. If you’ve had microbiology, you learned an antibody is VERY specific, and what literally binds to a hormone is an antibody. But you still have to be able to measure that binding of that antibody. So they use a radioactive antibody. Some new techniques don’t necessarily have to use a radioactive antibody, but they all use antibodies. These were commonly administered in the area of the hospital called nuclear medicine. They use these things to measure hormone levels and also cancer cells to see how far they have metastasized (spread).

Next let’s learn about ACTH.

Do you have questions in regards to your training, diet or habits in general? I bet you do because I get messages every single day from people looking for … END_OF_DOCUMENT_TOKEN_TO_BE_REPLACED

Looking for a simple and straightforward bodyweight-oriented strength training routine that doesn't take too much time? You're not the only one! A survey I … END_OF_DOCUMENT_TOKEN_TO_BE_REPLACED

In this day and age most people are working from home and struggling to find the balance between stagnation and moving to stay fit. This program was developed … END_OF_DOCUMENT_TOKEN_TO_BE_REPLACED

I have three premium flexibility programs that I offer and many of you have been clamoring for a bundle-package, so here it is! You could now buy the … END_OF_DOCUMENT_TOKEN_TO_BE_REPLACED

For anyone who wants better shoulder health, shoulder flexibility, a looser upper back and improved posture, this program takes all the guess work out of it to … END_OF_DOCUMENT_TOKEN_TO_BE_REPLACED

I don't know about you but nothing gets me fired up more than working on my abs. It's a unique muscle group that is utilized in every exercise and making it … END_OF_DOCUMENT_TOKEN_TO_BE_REPLACED

I've created this hip flexibility program for those that would like to improve their flexibility in an efficient manner, with a follow along video that only … END_OF_DOCUMENT_TOKEN_TO_BE_REPLACED

For those who have poor flexibility, tight hamstrings and want a simple program that will help them to get looser in a gentle, non-painful manner. In this … END_OF_DOCUMENT_TOKEN_TO_BE_REPLACED