Examples of glucocorticosteroids released by the adrenal cortex: Cortisol (Cortisone) and Corticosterone.

These things raise the blood sugar level, but how do they raise it? They increase the breakdown of proteins in our body. First the proteins are broken down into amino acids and then they undergo gluconeogenesis, which turn them into sugars.

Most of the protein in our body is in our muscles in the form of actin and myosin. They are broken down into amino acids, then deamination occurs, and then when you remove that amine group (NH2), you actu­ally form NH3 (Ammonia). Then in your liver, this ammo­nia is turned into urea which is basi­cally a car­bon and oxy­gen with two amino groups. Your liver releases this urea into the blood stream and it’s the major organic waste car­ried in our blood stream which is then excreted by your kidneys.

When the amine group (NH2) is removed from the protein, it becomes a ketone acid, which then becomes acetyl sugar. The name of the hormone that causes that to happen is cortisol. We went over all this protein catabolism before, but now you know it’s cortisol that causes this.

Side effects of glucocorticsteroids: The cortisol not only causes the breakdown of proteins into sugars and fats but there are some other really weird actions. At really high levels they have an anti-inflammatory effect and stop cells from releasing ALL chemical mediators of inflammation. The NSAIDs (aspirin, ibuprofen) are not as powerful because they stop the release of ONLY kinins and prostaglandins.  The more powerful steroidal drugs stop the release of ALL the chemical mediators. We don’t use the actual natural chemicals as hormones as medicine because our enzymes break them down really quickly. So we use a synthetic mimetic of a glucocorticosteroid, such as prednisone. If given as medicine, it’s not recommended to be taken for a long time because they cause a breakdown of proteins in our body.

Another weird action of cortisol and prednisone is that it acts as an immunosuppressant because it decreases the lymphocyte count, and that’s known as lymphocytopenia. Penia means decrease. Why in the world would someone be given prednisone for the purpose of suppressing the immune system? To prevent organ transplant rejection and also reduce the effects of auto-immune disease. 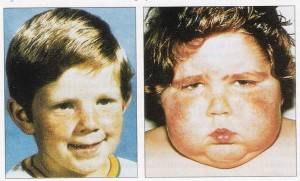 Excess of glucocorticosteroids: Anytime somebody is oversecreting glucocorticosteroids (maybe due to a tumor in the adrenal cortex or an oversecretion of ACTH, or due to someone taking predinose for an extended period), their entire body changes because their muscles atrophy (due to protein catabolism), and it turns into fat in weird parts, such as between the shoulder blades, the belly, and they get what’s called half-moon face. This is known as Cushing’s Syndrome. So that’s why when somebody has arthritis (inflammation of the joints), it’s not a good idea to take glucocorticosteroids chronically. The NSAID’s have less side effects.

A major trigger of Corticotropin Releasing Hormone is stress. C.R.H is what causes the release of ACTH (Adrenocorticotropin Hormone) which gets the adrenal cortex to secrete cortisol. 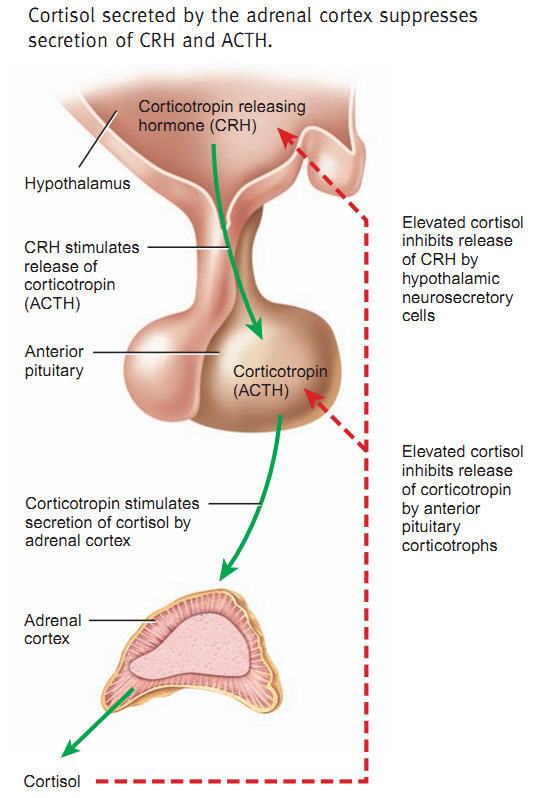 The model of ALL tropic hormones is a NEGATIVE FEEDBACK LOOP.

The reason we don’t suffer form Cushing’s (excess) or Addison’s (deficiency) is because of this feedback loop.

Let’s continue by reading how stress affects the cortisol level.

I've created this hip flexibility program for those that would like to improve their flexibility in an efficient manner, with a follow along video that only … END_OF_DOCUMENT_TOKEN_TO_BE_REPLACED

For anyone who wants better shoulder health, shoulder flexibility, a looser upper back and improved posture, this program takes all the guess work out of it to … END_OF_DOCUMENT_TOKEN_TO_BE_REPLACED

Looking for a simple and straightforward bodyweight-oriented strength training routine that doesn't take too much time? You're not the only one! A survey I … END_OF_DOCUMENT_TOKEN_TO_BE_REPLACED

I have three premium flexibility programs that I offer and many of you have been clamoring for a bundle-package, so here it is! You could now buy the … END_OF_DOCUMENT_TOKEN_TO_BE_REPLACED

I don't know about you but nothing gets me fired up more than working on my abs. It's a unique muscle group that is utilized in every exercise and making it … END_OF_DOCUMENT_TOKEN_TO_BE_REPLACED

This training routine is focused largely on increasing strength and muscle mass (aka muscular hypertrophy). If I had to sum up the routine in one fell swoop I … END_OF_DOCUMENT_TOKEN_TO_BE_REPLACED

In this day and age most people are working from home and struggling to find the balance between stagnation and moving to stay fit. This program was developed … END_OF_DOCUMENT_TOKEN_TO_BE_REPLACED

This is for anybody who wants to get strong and have fun with a gymnastics-inspired routine. It is highly bodyweight-exercise oriented (no external weights) and … END_OF_DOCUMENT_TOKEN_TO_BE_REPLACED