Let’s explore the idea that chemicals are “bad,” or that natural substances are “good.” 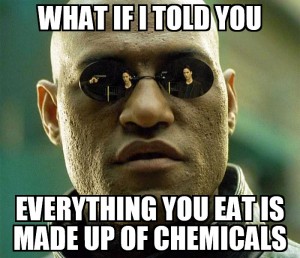 Pretty much all matter in this world can be broken down to its chemical composition.  The sugars, fats, proteins and nucleic acids you ingest every day are chemicals. They are the building blocks for everything that is made up in your body.

Calling something a “chemical” does not mean it is artificial or nasty.  Water and air are chemicals.

In fact, when you TASTE something, what you are tasting is the actual chemical composition of the food. 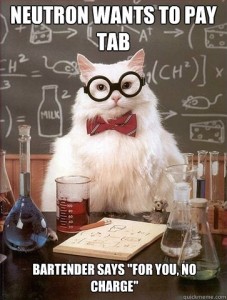 Your taste buds are known as chemoreceptors, meaning they literally transform chemical signals in food into electrical signals in the body.  This also applies to your sense of smell (olfaction), by the way, but let’s just focus on taste.

What we call sweet is any sugar (carbohydrate) that activates the sweet-chemoreceptors.

For example: Glucose, fructose and galactose are all made up of 6 carbon atoms, 12 hydrogen atoms and 6 oxygen atoms. (C6H12O6)

Sour things are activated by acids. An acid is anything that, when mixed with water, releases hydrogen ions (H+). 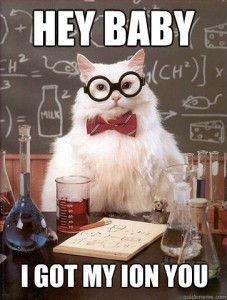 Examples: Citric acid in lemonade and lactic acid found in many foods such as yogurt, sour cream, buttermilk, etc.

What we call salty are salts. The definition of a salt is a combination of a metal and a nonmetal. 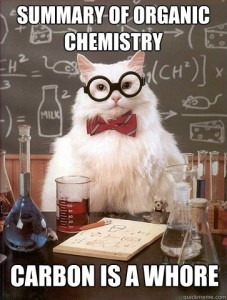 What we call bitter are usually nitrogenous organic molecules (molecules that contain lots of carbon and nitrogen). Many poisons found in nature are bitter and it’s surmised that evolutionary speaking, we have ended up with a very low threshold for bitterness due to that reason.

Examples: If you’ve ever put an aspirin tablet in your mouth, it’s very bitter. It originally came from the bark of a willow tree but is synthesized in a lab now. It’s actually the first synthetic drug ever produced! Unsweetened cocoa is another example of an organic molecule. Caffeine is as well but many people have gotten used to it (or deal with it by adding sugar).

Umami is a loan word for “pleasant savory taste” and is often associated with meat, which is almost entirely protein.  Amino acids are the building blocks for protein.

Fifteen years ago a group of Japanese researchers discovered these umami-chemoreceptors which are specifically activated by amino acids, such as L-glutamate.

What was the point of all this, Anto!?

The purpose of these chemoreceptors are to inform us of the presence of sugars, acids, salts, organic compounds and amino acids in our foods. Food is something external that is going to become internal, so we better have a sense of what we’re putting in our body.  For example, if you drink some milk and it tastes really sour, that informs us that it’s gone bad and we could spit it out. 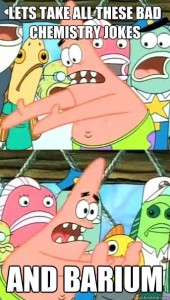 I hope that drives the point that…

What isn’t a chemical?

Dreams aren’t chemicals. Daydreams too, for that matter, although they may be caused by chemicals. 🙂

Energy isn’t a chemical either. Light, sound, heat, electricity and magnetic fields are all forms of energy, and just like dreams, probably caused by chemicals.

But Anto! When I say chemical, I mean the BAD-chemicals!

Well then, why don’t you be a little more specific next time and tell us which ones you’re talking about?  Saying something is a chemical, isn’t adding any value to the discussion.  It’s like saying this water is really, really wet.

Think for yourself.  Make your own decisions.  Grab a package from your kitchen.  Read the ingredients.  Google what everything is in the list.  Find out what it is, its purpose and in what quantity is it considered bad for you?  The ingredients listed first, are the ones with the greatest amount and following in descending order, are those in smaller amounts.

Hope that helps clarify some things!!!

Do you have questions in regards to your training, diet or habits in general? I bet you do because I get messages every single day from people looking for … END_OF_DOCUMENT_TOKEN_TO_BE_REPLACED

Looking for a simple and straightforward bodyweight-oriented strength training routine that doesn't take too much time? You're not the only one! A survey I … END_OF_DOCUMENT_TOKEN_TO_BE_REPLACED

In this day and age most people are working from home and struggling to find the balance between stagnation and moving to stay fit. This program was developed … END_OF_DOCUMENT_TOKEN_TO_BE_REPLACED

I have three premium flexibility programs that I offer and many of you have been clamoring for a bundle-package, so here it is! You could now buy the … END_OF_DOCUMENT_TOKEN_TO_BE_REPLACED

For anyone who wants better shoulder health, shoulder flexibility, a looser upper back and improved posture, this program takes all the guess work out of it to … END_OF_DOCUMENT_TOKEN_TO_BE_REPLACED

I don't know about you but nothing gets me fired up more than working on my abs. It's a unique muscle group that is utilized in every exercise and making it … END_OF_DOCUMENT_TOKEN_TO_BE_REPLACED

I've created this hip flexibility program for those that would like to improve their flexibility in an efficient manner, with a follow along video that only … END_OF_DOCUMENT_TOKEN_TO_BE_REPLACED

For those who have poor flexibility, tight hamstrings and want a simple program that will help them to get looser in a gentle, non-painful manner. In this … END_OF_DOCUMENT_TOKEN_TO_BE_REPLACED