One carbon is broken off of each 3-carbon pyruvate sugar to form one carbon dioxide.  There is a technical name for splitting carbon molecules off the pyruvate to create carbon dioxide and that’s known as a decarboxylation.

The remaining 2-carbon-molecule is now an acetyl group.  This acetyl group attaches to Coenzyme A (CoA) to form acetyl-CoA and two molecules of NAD+ are reduced to two NAD-H2. 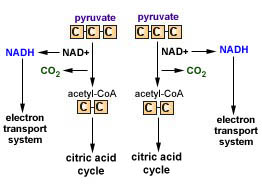 The two molecules of acetyl-CoA then enter the Krebs citric acid cycle while the 2 NAD-H2 molecules carry electrons to the electron transport system for further production of ATPs by oxidative phosphorylation.

The 2 Acetyl-CoA sugars are going to enter a series of reactions called the Krebs cycle, named after Dr. Krebs. It’s aka the citric acid cycle because it uses citric acid.

Basically what’s going to happen is that the 2 acetyl sugars are going to enter the cycle and they are going to be broken apart to form a carbon-dioxide molecule. At the end of the Krebs cycle, there will be no sugar.  Four carbon dioxide molecules will form in this cycle. During this process, energy is released to form two ATP’s. This is known as phosphorylation (when a phosphate group attaches to ADP to form ATP). Not only are additional ATP’s formed, but lots of “hot potato” high energy hydrogens are left off from the broken acetyl sugars when they turned into CO2.  Six NAD’s are going to pick up pairs of hydrogens (6-H2)and 2 FAD’s are going to pick up a pair of hydrogens (1-H2).

Does it seem like more hydrogens were have been removed than originally present from this sugar?  Yes, and that’s because 6 H2O molecules come in to accommodate the process.

The reality is that this process actually involves over 10 steps but we are simplifying it for our understanding.

1. C6H12O2 (glucose) have totally broken down into six CO2 molecules. (Two from transition reaction and four from the krebs cycle)

What yet needs to happen?

1. The hydrogens have to be attached to oxygen to form water. We haven’t seen where that happens yet. We’ve only seen coenzymes (NAD/FAD) reduce hydrogens. (Remember, reduction is a gain of hydrogens or electrons.)

2. We need to form as many as 34 more ATP. In reality we might not form that many but the majority of ATP’s have yet to be produced.

To see how this occurs… read part 3 three that involves the Electron Transport Chain!

I've created this hip flexibility program for those that would like to improve their flexibility in an efficient manner, with a follow along video that only … END_OF_DOCUMENT_TOKEN_TO_BE_REPLACED

I don't know about you but nothing gets me fired up more than working on my abs. It's a unique muscle group that is utilized in every exercise and making it … END_OF_DOCUMENT_TOKEN_TO_BE_REPLACED

This training routine is focused largely on increasing strength and muscle mass (aka muscular hypertrophy). If I had to sum up the routine in one fell swoop I … END_OF_DOCUMENT_TOKEN_TO_BE_REPLACED

I have three premium flexibility programs that I offer and many of you have been clamoring for a bundle-package, so here it is! You could now buy the … END_OF_DOCUMENT_TOKEN_TO_BE_REPLACED

This is for anybody who wants to get strong and have fun with a gymnastics-inspired routine. It is highly bodyweight-exercise oriented (no external weights) and … END_OF_DOCUMENT_TOKEN_TO_BE_REPLACED

For anyone who wants better shoulder health, shoulder flexibility, a looser upper back and improved posture, this program takes all the guess work out of it to … END_OF_DOCUMENT_TOKEN_TO_BE_REPLACED

Looking for a simple and straightforward bodyweight-oriented strength training routine that doesn't take too much time? You're not the only one! A survey I … END_OF_DOCUMENT_TOKEN_TO_BE_REPLACED

In this day and age most people are working from home and struggling to find the balance between stagnation and moving to stay fit. This program was developed … END_OF_DOCUMENT_TOKEN_TO_BE_REPLACED