We had learned initially that nerve cells exhibit excitability and conductibility. Conductibility is the capacity to conduct the electrical impulse along its pathway.  The way the conduction of the action potential occurs along the nerve fiber depends on whether it’s myelinated or unmyelinated.  Note: All muscle cells are unmyelinated, there is no insulation in muscle cells. Nerve cells could be either.

Conduction along an Unmyelinated Nerve Fiber

Initially, a threshold stimulus creates an action potential.  As the nerve fiber depolarizes, it triggers an increase in permeability of the ligand-gated sodium ion channels that causes sodium channels to open and sodium ions go into the nerve cell and reverse polarity because positively charged ions are flowing in.  This action potential is going to be conducted along the length of the fiber by cause the next adjacent space to open voltage-gated sodium ion channels to open.

So as we go from left to right, sodiums are entering the cell due to these voltage-gated sodium ion channels opening up and meanwhile, to the left of it, the potassiums are going out.  As the potassium ions go out, it repolarizes.  This idea of sodium coming in and potassium going out, is going to repeat constantly so it appears to keep moving the electricity through the fiber.

Analogy: When you cause a ripple to move across the surface of the water, the wave is moving along and each ripple is like sodium ions coming in and potassium ions coming out.

In the picture below we see an impulse is transmitted as a wave of depolarization that travels down the axon.  At the region of depolarization, Na+ ions diffuse into the cell.  As the impulse passes, potassium ions flow outward until the resting potential is restored.  Then, what is not shown is the working of the Na+/K+ ATP pump that pumps the sodium back out of the axon so that the resting conditions are reestablished.

Conduction along a Myelinated Nerve Fiber

Above we see a myelinated neuron.  If the myelinated cells are wrapped around interneurons, they are oligodendrocytes. If they’re wrapped around neurons in the PNS they’re called Schwaan cells. In either case there are these gaps called Nodes of Ranvier.  The only place these potassium or sodium ions can enter or leave are from these spaces that are unmyelinated.  Sodiums come in and potassiums going out just like a an unmymelinated nerve fiber, except this signal seems to jump from one node to the next. This is called saltatory conduction. It has nothing to do with salt but it comes from the latin word saltaire which means to jump or leap.

Due to this skipping, saltatory conduction is up to 50 times faster than conduction through the fastest unmyelinated axons because they don’t have to travel throughout every single space before moving to the next.

So in essence, the action potential is generated only at the nodes.  The cell membrane below the myelin sheaths hardly have any sodium channels and are therefore not excitable anyway.  Since the ionic currents are restricted to the nodes of Ranvier in the myelinated axons, this minimizes disturbances in the Na+/K+ concentration gradients which reduces the energy costs of the Na+/K+-ATP pump that have to restore ionic balance.

1) One factor we just learned is whether it’s myelinated or umeylinated.  (In a myelinated neuron, the AP travels faster.  ALL muscle cells are unmyelinated while nerve cells could be either.)

2) The larger the diameter of the nerve fiber, the faster the conduction velocity.

Have you heard the nervous system sends electrical signals? Yes, everybody has.

Do you think the electrical signals travel at the same speed as electricity in a wire?  Most people would say yes.

How fast does electricity move in wires? The conduction velocity in a copper wire is 300 million meters per second. It travels at the speed of light because electricity, like light, is a form of electromagnetic radiation.  The fastest a nerve fiber will travel is 100 meters per second.

1) What’s moving in a copper wire are electrons. For all intents and purposes, electrons don’t weigh anything. What’s actually moving in a nerve fiber are sodium ions.  A sodium ion would have 11-12 neutrons and protons.  If an electron is a pea, the sodium ion is the SUN. 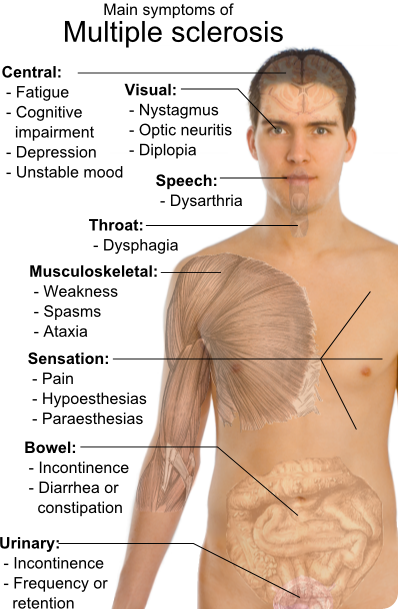 At this point, maybe you’re thinking that this condution-talk has nothing to do with you being a nurse, but let’s talk about multiple sclerosis.  Do you think as a future nurse you might have to deal with a M.S. patient?

Multiple Sclerosis is an auto-immune disease where the white blood cells of the immune systems attack the myelinated cells that wrap around nerve fibers.  Degeneration of the oligodendroglia and Schwann cells is known as demyelinating and the replacement of those with scar tissue is called sclerosis.

We know that myelinated nerve fibers fire very quickly. If the immune system destroys the myelinated cells, what is that going to do to the conduction velocity? Slow it down!  People with MS will first notice that they can’t move their body like they used to, so instead of running they’re walking.  Everything is slowing down because of the degradation of these myelinated cells.  It’s associated with paralysis, tremors or disturbances in speech, depending upon the location of the lesions.

Once we have this newly-unmyelinated nerve fiber, scar tissue forms around it.  The actual name for scar tissue is dense irregular scar tissue.  Scar tissue is made up of fibroblast cells and these cells are a type of connective tissue that synthesize collagen protein. Two terms are used when this happens. Fibrosis because fibroblasts are producing things or Sclerosis that means “hardening” because scar tissue is hard.  (Totally unrelated to this, when scar tissue forms in the walls of our arteries, it’s called atherosclerosis, which means hardening of the arteries).

Sodium ions can’t enter through these scar tissues. At this point some people go from slowing down to not being able to move at all. This individually varies greatly on how quickly this progresses. This may go on for decades with people. There may be decades where things don’t progress but then it does later. And with some it’s a more rapid deterioration. As we go from myelinated to unmyelinated, we have a slowdown of conduction velocity until finally there is no conduction velocity due to the scar tissue that doesn’t allow sodium ions to enter.  You couldn’t have understood this if you didn’t read over how conduction velocity works in this post, so we have yet another layer in our foundation of basic physiology.

There’s hundreds of these auto-immune diseases.  For some reason WBC’s are not recognizing your own cells and attacking them and it is thought to be mainly a genetic problem.

One of the routes of treatment is to give immunosuppressant drugs that suppress the immune response by lowering the lymphocyte WBC count. The most common drug to do this are corticosteroids and an example is prednisone because they will lower the amount of these WBC’s that are attacking your own body. For some reason this is more common in women than men.

Next, we talk about synapses and the synaptic transmission…

I don't know about you but nothing gets me fired up more than working on my abs. It's a unique muscle group that is utilized in every exercise and making it … END_OF_DOCUMENT_TOKEN_TO_BE_REPLACED

I've created this hip flexibility program for those that would like to improve their flexibility in an efficient manner, with a follow along video that only … END_OF_DOCUMENT_TOKEN_TO_BE_REPLACED

Looking for a simple and straightforward bodyweight-oriented strength training routine that doesn't take too much time? You're not the only one! A survey I … END_OF_DOCUMENT_TOKEN_TO_BE_REPLACED

For anyone who wants better shoulder health, shoulder flexibility, a looser upper back and improved posture, this program takes all the guess work out of it to … END_OF_DOCUMENT_TOKEN_TO_BE_REPLACED

This is for anybody who wants to get strong and have fun with a gymnastics-inspired routine. It is highly bodyweight-exercise oriented (no external weights) and … END_OF_DOCUMENT_TOKEN_TO_BE_REPLACED

In this day and age most people are working from home and struggling to find the balance between stagnation and moving to stay fit. This program was developed … END_OF_DOCUMENT_TOKEN_TO_BE_REPLACED

I have three premium flexibility programs that I offer and many of you have been clamoring for a bundle-package, so here it is! You could now buy the … END_OF_DOCUMENT_TOKEN_TO_BE_REPLACED

This training routine is focused largely on increasing strength and muscle mass (aka muscular hypertrophy). If I had to sum up the routine in one fell swoop I … END_OF_DOCUMENT_TOKEN_TO_BE_REPLACED