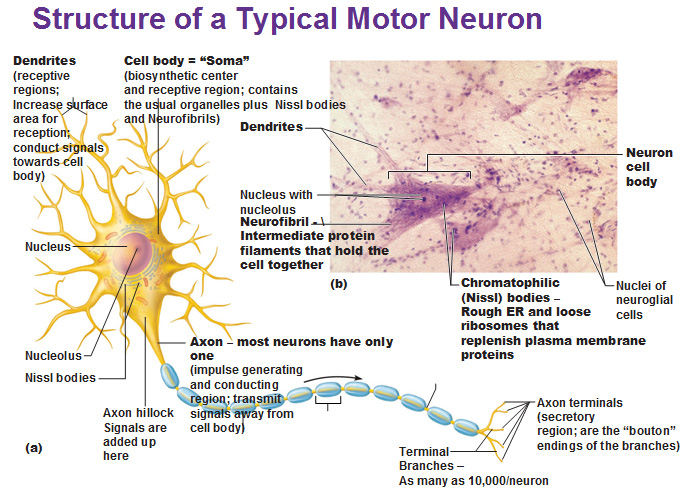 Nerve cells shows more variation in shape than any other cell in the body.  The cell body is the area where the nucleus is.  Coming off the body are these extensions called neuronal processes/extensions: dendrites and axons.  Dendrite is the most difficult to define but we could call them detecting stimuli (changes) and we’ll leave it at that.  Axons are easier to define and we could say they always terminate into synaptic knobs.  The dendrites don’t have terminating knobs at the end of it.  The axons are what conduct action potentials away from the cell body.  The axon is not an axon because it’s long, it’s an axon because of the existence of synaptic knobs at the axon terminals.  When the axon conducts action potentials away from the cell body and the signal goes to the synaptic knob, it’s going to release a neurotransmitter in response to the electrical signal.  These neurotransmitters are how information is passed through the nervous system. It is not a flow of electrons (electricity) that is being conducted through like a piece of metal.

“Nerve cells shows more variation in shape than any other cell in the body.”

1. Bipolar: The cell body is where the nucleus is.  The branches off the cell body are neuronal processes.  How many neuronal processes off the cell body exist off this nerve?  Two.  Since it has two neuronal processes, it’s labeled a bipolar shaped neuron.  This has nothing to do with bipolar disorder (manic depression).  How do we label the axons?  We know they are axons if they have terminating knobs?  The axon is easy to define.  The dendrite is harder to define. The books are not consistent with which part of this cell is considered a dendrite so you won’t be given that info.  Where is this cell bipolar cell found?  It’s found in the retina of our eyes.  In fact, during embryonic development, the eyes grow directly right out of the brain.

2. Unipolar.  Most sensory neurons have this shape.  Whats the cell body?  It’s obvious here.  How many neuronal processes are coming off the cell body?  It’s just one.  It bifurcates afterwards but it’s considered to be unipolar before the branch.  The axons are easy to define because the axons have the the terminating synaptic knobs. Almost all the books call this a unipolar neuron and some books call it a pseudobipolar nerve.

3.  Multipolar.  Notice the cell body.  It’s got many neuronal processes.  Multi means many.  It’s easy to recognize the axon, it ends in synaptic knobs. This is a very important nerve because ALL motor neurons have this shape and many interneurons (we will explain interneurons soon).

1a. Somatic Sensory Neurons.  These neurons transmit information from the skin or skeletal muscles to CNS.  If you wiggle your toes, you will feel sensations from your skin and skeletal muscles contracting and relaxing.  We call these somatic sensory neurons.  Interestingly, this information reaches consciousness.  Consciousness meaning, your awareness.

1b. Visceral Sensory Neurons.  Visceral means internal organ.  These neurons transmit information from the internal organs to the CNS.  Interestingly, this information doesn’t usually reach consciousness.  Can you feel when your gall bladder contracts and releases bile?  Can you feel when your pancreas releases pancreatic juice?  Can you feel your kidneys filtering fluid?  No.  There’s information being sent but it’s not reaching consciousness and you’re not aware of it.  The only time you’ll feel it is when there is pain because something is wrong.

3. Motor (Efferent) neurons send action potentials to the effectors.  They are causing the organs of our body to DO STUFF.  ALL motor neurons have multipolar shapes.

3a. Somatic motor neurons innervate skeletal muscles and are under voluntary control.

3b. Autonomic motor neurons innervate visceral smooth muscle, cardiac muscle, and glands.  They are not under voluntary control. For example, try to wiggle your tongue.  STOP.  Wiggle your tongue again.  STOP.  We have voluntary control over the tongue, so that means it’s a skeletal muscle.  Okay, now speed up your heart.  STOP.  Speed up your heart.  STOP YOUR HEART.  Nah, we can’t seem to do that.  Okay now activate your sweat glands!!!  Sweat, go go go! STOP sweating!  We can’t do that.  If you can’t do it, it’s an internal organ controlled by an autonomic motor neuron. If I go running, my brain will automatically speed up the heart beat for me and if i generate enough heat, i will sweat, but I can’t do those things voluntarily. (Visceral sensory neurons are to sensory neurons as autonomic motor neurons are to motor neurons.)

Why is our awareness limited to the somatic sensory and somatic motor neurons?

The reason why it’s this way is so we could focus what’s going around us.  If you could consciously release bile, control your kidney filter, speed up your heart and reduce your heart, then you can’t do anything all day.  “Wanna go out for a movie?”  “No I’m busy controlling my internal organs.”  We let our brains do it automatically so we could focus in the world around us.

Four functional categories of our nerves

A nerve is like a telephone cable.  Inside the cable there are many wires.  Well, inside a spinal nerve there are hundreds of thousands of wires and there’s 4 categories of them.  Our nerves are what make up our peripheral nervous system.

We have these four types of wires in a nerve cell:

The sensory neurons represent the INPUT signal:  What do sensory neurons do?  They send information from our body to the CNS.  What’s the diff between somatic and visceral?  Somatic send from skin and muscle and send to our consciousness.  Visceral send from internal organs and don’t reach our consciousness.  We don’t just have four wires of each, we have hundreds of thousands of each.

Overview of the Nervous System Flowchart 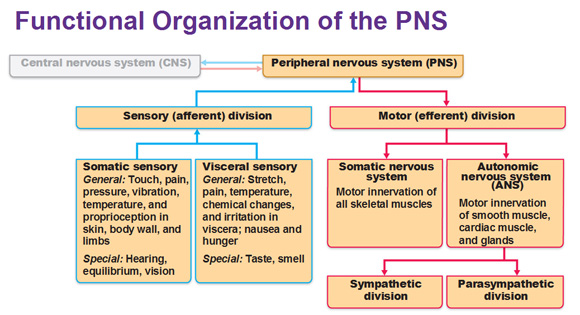 Let’s tie everything together using the graphic above.  What is the CNS?  The brain and spinal cord. And what do we call the neurons in the brain?  Interneurons!  What do we use them for?  Thinking, memory and decision making.

What is the PNS?  These are the cranial nerves and spinal nerves;  the nerves that come off the brain and spinal cord.  They go out the CNS to the periphery of the body.  What’s inside them?  Two types of sensory neurons (somatic and visceral) and two types of motor neurons (somatic and autonomic).  There are two subcategories of autonomic motor neurons (aka the autonomic nervous system; ANS) called the sympathetic/parasympathetic nervous systems.

And that concludes our introduction to Neurons.  Now it’s time to learn about…

I have three premium flexibility programs that I offer and many of you have been clamoring for a bundle-package, so here it is! You could now buy the … END_OF_DOCUMENT_TOKEN_TO_BE_REPLACED

I've created this hip flexibility program for those that would like to improve their flexibility in an efficient manner, with a follow along video that only … END_OF_DOCUMENT_TOKEN_TO_BE_REPLACED

This is for anybody who wants to get strong and have fun with a gymnastics-inspired routine. It is highly bodyweight-exercise oriented (no external weights) and … END_OF_DOCUMENT_TOKEN_TO_BE_REPLACED

For anyone who wants better shoulder health, shoulder flexibility, a looser upper back and improved posture, this program takes all the guess work out of it to … END_OF_DOCUMENT_TOKEN_TO_BE_REPLACED

In this day and age most people are working from home and struggling to find the balance between stagnation and moving to stay fit. This program was developed … END_OF_DOCUMENT_TOKEN_TO_BE_REPLACED

For those who have poor flexibility, tight hamstrings and want a simple program that will help them to get looser in a gentle, non-painful manner. In this … END_OF_DOCUMENT_TOKEN_TO_BE_REPLACED

This training routine is focused largely on increasing strength and muscle mass (aka muscular hypertrophy). If I had to sum up the routine in one fell swoop I … END_OF_DOCUMENT_TOKEN_TO_BE_REPLACED

I don't know about you but nothing gets me fired up more than working on my abs. It's a unique muscle group that is utilized in every exercise and making it … END_OF_DOCUMENT_TOKEN_TO_BE_REPLACED