We’re going to deal with electricity because we’re going to be talking about the electrical properties of cell.  So first let’s get acquainted with some basic electrical concepts.

1) There are positive charges and negative charges.  What is the origin of these charges?  We have protons and electrons.  We know that if there is a difference in either two, there is a polarity.  Even in a large molecule like a protein molecule, if the electrons exceed the protons, then that molecule has a slightly negative charge.

Everyone knows one end of the battery is positive and the other end is negative.  The reason why it’s like that is because it’s constructed with chemicals inside.  The chemicals that make up the battery on the positive end have an excess of positive charges.  The chemicals on the negative end have an excess of negative charges on that end .  These chemicals don’t want to be together (because like charges repel each other) but that’s the way it’s constructed.  We could take a voltmeter (battery tester) and put an electrode (probe) to one end of the battery and another to the other end.  What this tells us is the difference in electrical polarity.  The greater the difference of electrical polarity, the greater the voltage.  Voltage is synonymous with electrical potential and both mean a difference in electrical polarity.

The charges inside of a battery cannot move because there is a highly-resistant separator that prevents them.  internally.  Air is also a great resister, meaning it hinders the flow of current.  If we take a copper wire, which has a low electrical resistance that doesn’t hinder the movement of electrical charges, the positive charges are always going to move to the negative charges.  When these charges start moving, that’s an electrical current.  The lower the resistance, the greater the current.  In reality, protons don’t move, electrons do.  What’s moving in the wire is not positively charged electrons but negatively charged ions going from negative to positive.  Eventually when we no longer have this difference in electrical polarity, the battery will be dead.

So far we’ve described voltage, electrical current, and resistance. Now we tie those in with Ohm’s law, described by Georg Simon Ohm in 1827.

Current (I or C) = Voltage / Resistance

The cute thing about these little formulas is that if you know any two of these you could solve for the third.

This voltage is found in every single cell of every living thing.  So this isn’t just in the nerve cell.  It’s found in plant cells, bacteria cells, and so forth.  All cells exhibit an electric potential (voltage) called the “Resting Cell Membrane Potential.”  They measured this voltage and found it varies in cells from 70-90mV, usually it’s written as -70mV or -90mV because it’s a negative voltage.

To relate to this, the most common batteries we use are 1.5 volts.  So a cell is less than a tenth of a volt.  How many cells are in your body?  Sixty trillion cells and each one is like a battery.  The amount of electrical energy in your body is AWESOME.

Ever seen “The Matrix” movie?  What were the machines that have taken over the world using the humans in the incubators or?  As batteries to power the machines.  Every single cell in your body is a battery and you have 60 trillion of these cells.  Electroencephalography (EEG) monitors the electrical energy of your body, electrocardiography (ECG) for your heart, electromyography (EMG) for your muscles and so forth.

Where does this voltage come from?

How come almost all the potassium is inside of our cells and all the sodium is outside?

Because there’s a Sodium-Potassium ATP pump that concentrates the potassium on the inside and the sodium on the outside.

The most important numbers to know are… 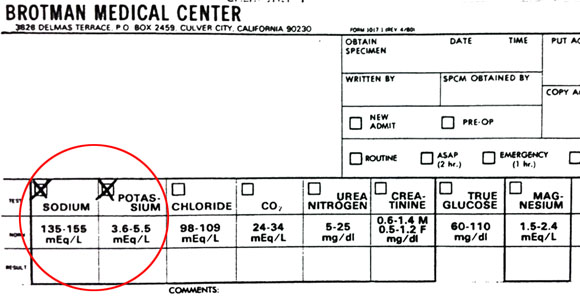 If you think this has nothing to do with nursing, look at this chart above stolen from the Brotman Medical Center hospital.  If you’ve worked in a hospital you know they’re always checking your electrolyte levels.  The normal amount of sodium is listed as 135-155mEq/L and potassium is listed as 3.6-5.5/mEq/L.  We are just rounding them off to 150 and 5 to keep things simple.  When these change, it affects the electrical activity of all our cells.

Do all molecules affect the electrical polarity of the cell?

Why doesn’t potassium flow out of the cell until there are equal amounts inside and out?

As potassiums flow out due to the concentration gradient, the inside of the cell becomes more negative, which attracts the potassium (K+) back inside the cell because opposite charges attract and the potassium ion channels are always open.  When the electrical gradient is pulling something in is as strong as the concentration gradient pushing it out, then it reaches equilibrium.  The electrical polarity on the inside is about 70-90mV and it’s strong enough to keep the potassiums in.

This is occurring because only potassium ion channels are open.  If sodiums were able to move in, then this wouldn’t happen, but remember potassiums are the only ones that can move out of the cell.  This is what creates the electrical polarity.

1) The concentration gradient causes K+ to diffuse out of the cell.

2) The electrical gradient that develops, causes K+ to diffuse back into the cell.

This equilibrium (steady-state) potential of 90mV is called the resting cell membrane potential (voltage) because it’s the difference in electrical polarity across that cell.  What’s creating this voltage is the fact that only potassium can flow through the membrane.

What about the sodium potassium ATP pump?  Is that going to change anything? No.  At the simplest level, if all the pump did was to kick a positively charged sodium out and bring a positively charged potassium in exchange, then nothing would change.  And if it pumped a potassium into the cell, the concentration gradient would increase causing another potassium to diffuse out of the cell.  Thus, the membrane potential tends to remain constant.

The Nernst Equation can predict the voltage of any cell as a battery.  This may help somebody understand.

When the K+ electrolyte levels change, the voltage for every single cell of your body changes.

Next, we explain why this subject is important clinically…

For those who have poor flexibility, tight hamstrings and want a simple program that will help them to get looser in a gentle, non-painful manner. In this … END_OF_DOCUMENT_TOKEN_TO_BE_REPLACED

I have three premium flexibility programs that I offer and many of you have been clamoring for a bundle-package, so here it is! You could now buy the … END_OF_DOCUMENT_TOKEN_TO_BE_REPLACED

Looking for a simple and straightforward bodyweight-oriented strength training routine that doesn't take too much time? You're not the only one! A survey I … END_OF_DOCUMENT_TOKEN_TO_BE_REPLACED

In this day and age most people are working from home and struggling to find the balance between stagnation and moving to stay fit. This program was developed … END_OF_DOCUMENT_TOKEN_TO_BE_REPLACED

For anyone who wants better shoulder health, shoulder flexibility, a looser upper back and improved posture, this program takes all the guess work out of it to … END_OF_DOCUMENT_TOKEN_TO_BE_REPLACED

I've created this hip flexibility program for those that would like to improve their flexibility in an efficient manner, with a follow along video that only … END_OF_DOCUMENT_TOKEN_TO_BE_REPLACED

I don't know about you but nothing gets me fired up more than working on my abs. It's a unique muscle group that is utilized in every exercise and making it … END_OF_DOCUMENT_TOKEN_TO_BE_REPLACED

This is for anybody who wants to get strong and have fun with a gymnastics-inspired routine. It is highly bodyweight-exercise oriented (no external weights) and … END_OF_DOCUMENT_TOKEN_TO_BE_REPLACED