A synapse is the junction formed between a neuron and another neuron or effector cell.  It’s basically the space between neurons when the magic happens.  And by magic, I mean the stimulation or inhibition of an action potential.  First, let’s have an overview of what’s going on in this picture below. 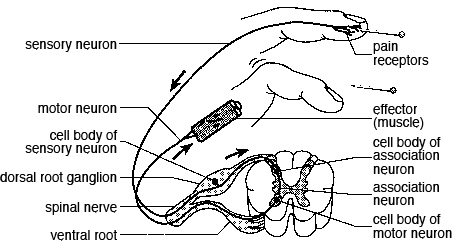 The pathway of sensory information to motor movement:

Now we’re going to dive into and explore the synaptic transmission of the somatic motorneurons in detail. 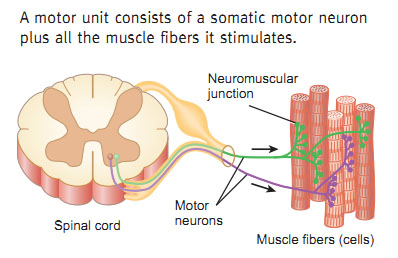 Picture below:  If we magnify this synapse area, this junction, we’ve got these synaptic knobs and notice they don’t actually touch since there is a gap called the synaptic cleft.

What we’re looking at is a step by step what’s going on at the Neuromuscular junction. 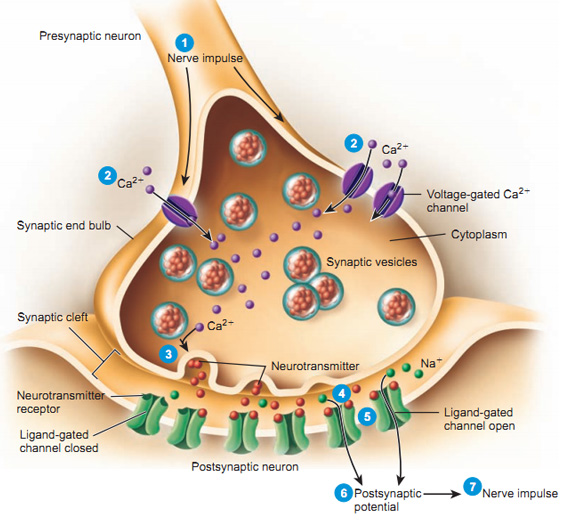 Synaptic Transmission at the Neuromuscular Junction

It’s very important as you go through this, this is a story to learn.  Everything happens sequentially.

1. An Action Potential (AP) is conducted down the somatic motorneuron down to the synaptic knob.

2. The reversal in electrical polarity at the synaptic knob causes an opening of “voltage-gated” Ca+2 channels  (Voltage gated calcium ion channels open and allow calcium ions to flow inside due to the voltage change).  Calcium ions are very important for the release of neurotransmitters and secretion of hormones by endocrine cells.

4.  The ACh diffuses across the synaptic cleft and binds to “nicotinic” ACh Receptor Site Proteins on the membrane of the Skeletal Muscle Cell (Fiber).  The first chemical they discovered that affects this receptor site, happened to be nicotine so that’s why it got the name, nicotinic cholinergic receptor.

6. As sodium ions flow into the Skeletal Muscle Cell, it depolarizes to the threshold potential, triggering an Action Potential.

7. As the action potential spreads along the cell, it causes the muscle cell to contract.

8. The ACh which is attached to the receptor site, is split into acetate and choline by acetylcholinesterase (ACHase), an enzyme of the skeletal muscle cell membrane.

10. The acetate & choline are actively transported back-up into the synaptic knob (“Active Reuptake”) to be re-synthesized.

Eventually, we’re going to talk about a neurotransmitter in our brain called Serotonin.  There’s a class of medicines called Selective Serotonin Reuptake Inhibitors (SSRI).  This concept of reuptake will appear when we investigate how these drugs works.

Neuromuscular Blocking Agents block ACh receptor sites on skeletal muscle fibers causing flaccid paralysis of voluntary muscles.  A name of a neuromuscular blocking drug is called Curare.  This drop will attach to the ACh receptor site, preventing the ACh from attaching so ACh cannot activate the receptor sites.  Why would you want to do this?  All drugs are used for many, many purposes.  Flaccid paralysis is important during surgery to keep the muscle that is being cut through, relaxed.  It is sometimes used to relax the diaphragm.  It’s the most important of all voluntary muscles so the patient doesn’t fight the respirator.  When somebody is going under surgery, they are going to be put on a ventilator and that forces air in and the relaxed muscle allows the air in.  Otherwise, you may not want to inhale at the same the machine wants you to inhale, so they make the diaphragm go into flaccid paralysis.

Cobra Toxin: Just the other day you were probably talking about cobra poison.  Cobras are found in India.  When it bites somebody, its fangs introduce a poison.  And the way that works is just like a neuromuscular numbing agent.  The poison attaches to all these cells of the body so the person cannot walk, move their arms and they are going to die because they cannot breathe.  I once looked up how many people die from cobra bites in India: 40,000/year.  But of course India has a population of 1 billion so 40,000 seems like nothing.

Acetylcholinesterase Inhibitors stop the AChase from working.  If the AChase enzyme stops working, then there’s nothing to break down the ACh, the sodium channels remain open and the muscle stays contracted.  When this happens, and cannot relax, that’s known as spastic paralysis.  If you just think of your arms.  Drop them on the sides and make them relax, imagine you were unable to move your arms.  Now let’s try contracting your muscles by making a fist.  Don’t relax them for several seconds. That’s spastic paralysis.  You’re going to die from splastic paralysis because you can’t breathe.  Let’s remembering how breathing works.  When your diaphragm muscle contracts, your inhale.  When it relaxes, you exhale.  Whether you have flaccid paralysis and you can’t inhale, or if you have spastic paralysis where your diaphragm muscle can only stay constricted, you’re going to die because breathing is a process.

2. Nerve gas poisons such as Sarin gas, Tabun and Soman can be used to kill people.  When the US went into Iraq in the 2000’s, they were prepared for Saddam Hussein to hit the soldiers with sarin nerve gas because this is what they did in the previous 2 wars.  What most people don’t know is that Iran and Iraq have had lots of wars continiously.  There were small towns on the Iran side where everyone was dead because of the sarin nerve gas.  Why Saddam Hussein didn’t use them on the US soldiers, we are not sure.  The irony is, when we invaded Iraq, we took away the natural enemy of Iran.  In 1995, a revolutionary group in Japan killed 400 people in a subway station by releasing sarin nerve gas.  Sarin gas kills people like malathion kills insects.

Polio: If you’ve ever seen Isaac Pearlman, very famous violinist, he had polio, he doesn’t walk onto the stage, he drove on with a cart.  Most people who develop polio, die from it.  It’s a lytic virus that is tissue specific for somatic motor neurons, causing the rupture of them, losing your ability to activate your skeletal muscles.  Initially you lose your limb muscles and you eventually die because you can’t breathe.  The most important skeletal muscle is the diaphragm.  When they developed the vaccine, they required EVERY SINGLE PERSON to be vaccinated to eradicate polio.  They would not accept a NO for an answer.  So nowadays, our major concern of polio today is its possible use as bioterrorism since nobody is immunized against it today.

Botulism: It’s kind of like a food poisoning due to an exotoxin produced by Clostridium botulinum.  The toxin prevents the somatic motor neuron from releasing ACh so even though it does an AP, it can’t release ACh and they have to be put on a ventilator because of flaccid paralysis.

Myasthenia gravis:  This is when the immune system destroys all the ACh receptor sites so even if the knob releases it, there’s no place for it to attach so there’s no way for it to contract so there is aprogressive weakening of the muscles and it leads to flaccid paralysis (do no confuse this with multiple sclerosis which is an auto immune disease that attaches to the myelination around a fiber).

We’ve given you these examples to exemplify what’s going on in the synaptic cleft.  Next we talk about the synaptic transmission by interneurons…

Do you have questions in regards to your training, diet or habits in general? I bet you do because I get messages every single day from people looking for … END_OF_DOCUMENT_TOKEN_TO_BE_REPLACED

Looking for a simple and straightforward bodyweight-oriented strength training routine that doesn't take too much time? You're not the only one! A survey I … END_OF_DOCUMENT_TOKEN_TO_BE_REPLACED

In this day and age most people are working from home and struggling to find the balance between stagnation and moving to stay fit. This program was developed … END_OF_DOCUMENT_TOKEN_TO_BE_REPLACED

I have three premium flexibility programs that I offer and many of you have been clamoring for a bundle-package, so here it is! You could now buy the … END_OF_DOCUMENT_TOKEN_TO_BE_REPLACED

For anyone who wants better shoulder health, shoulder flexibility, a looser upper back and improved posture, this program takes all the guess work out of it to … END_OF_DOCUMENT_TOKEN_TO_BE_REPLACED

I don't know about you but nothing gets me fired up more than working on my abs. It's a unique muscle group that is utilized in every exercise and making it … END_OF_DOCUMENT_TOKEN_TO_BE_REPLACED

I've created this hip flexibility program for those that would like to improve their flexibility in an efficient manner, with a follow along video that only … END_OF_DOCUMENT_TOKEN_TO_BE_REPLACED

For those who have poor flexibility, tight hamstrings and want a simple program that will help them to get looser in a gentle, non-painful manner. In this … END_OF_DOCUMENT_TOKEN_TO_BE_REPLACED