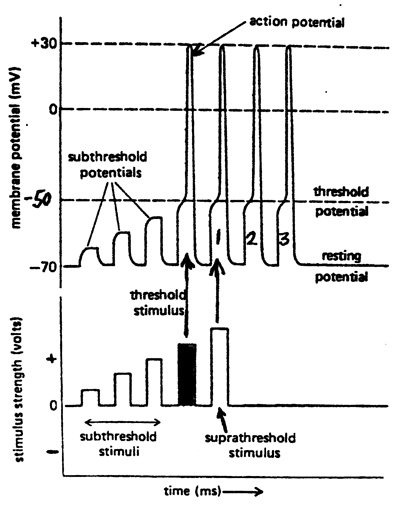 In this graph to the right, we are shown a neuron and it shows how different intensities of stimuli affect the voltage changes. On the bottom of the graph we see stimuli: starting with a weak stimulus and slowly going to a stronger one. On the top we see our millivolts and when we give a really weak stimulus we have this small little response labeled subthreshold potential.

Analogy: Imagine this guy wants to push a boulder up a hill to go over a cliff and he pushes it toward the edge and it rolls right back if he doesn’t get to the top. He needs to push it all the way over the edge and once it goes over, there’s no stopping it once, it’s going to go over that cliff.  When we stimulate a neuron, enough positively charged sodium ions need to go into a cell to depolarize the membrane. A threshold stimulus increases the permeability of the sodium ion channels which caused the ion channels to open and enough of it rushes in that it leads to the reversal of the polarity of the AP.

I have three premium flexibility programs that I offer and many of you have been clamoring for a bundle-package, so here it is! You could now buy the … END_OF_DOCUMENT_TOKEN_TO_BE_REPLACED

For anyone who wants better shoulder health, shoulder flexibility, a looser upper back and improved posture, this program takes all the guess work out of it to … END_OF_DOCUMENT_TOKEN_TO_BE_REPLACED

I don't know about you but nothing gets me fired up more than working on my abs. It's a unique muscle group that is utilized in every exercise and making it … END_OF_DOCUMENT_TOKEN_TO_BE_REPLACED

I've created this hip flexibility program for those that would like to improve their flexibility in an efficient manner, with a follow along video that only … END_OF_DOCUMENT_TOKEN_TO_BE_REPLACED

For those who have poor flexibility, tight hamstrings and want a simple program that will help them to get looser in a gentle, non-painful manner. In this … END_OF_DOCUMENT_TOKEN_TO_BE_REPLACED

This training routine is focused largely on increasing strength and muscle mass (aka muscular hypertrophy). If I had to sum up the routine in one fell swoop I … END_OF_DOCUMENT_TOKEN_TO_BE_REPLACED