Twice a year, on a Spring of Fall Sunday, almost 10 miles of LA streets are closed to cars. These events bring families outside of their homes to enjoy the streets.  Most of them ride their bikes but even just walking is peaceful without the noise, smell and stress of cars around you.  I wrote a bit more about it here, with pictures and some video.

Changes to the October 2012 Route

The core of CicLAvia has always been in downtown at 7th and Spring, but for this year ALL of the route’s “arms” have changed.

Here’s the route (you may click on it to see a larger version that will open in a new window): 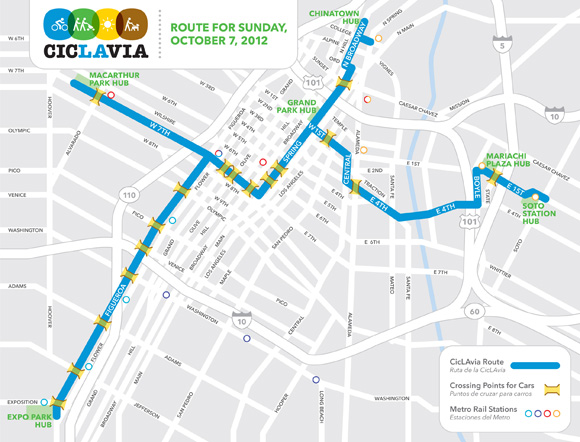 In short, the new route is more of a “north-south” route with arms going east and west instead of the reverse.

One of the committee members for Ciclavia, Aaron Paley, explains the changes…

We don’t want to repeat the same route over and over again, we want to set the precedent that CicLAvia is not set to one area, and not for just the streets we started out with.. This is in effect a harbinger of things to come.

I personally hope to bring the ++music trailer out there this year, and then go to play on the Santa Monica Rings until Magic Hour.  See you around!

In this day and age most people are working from home and struggling to find the balance between stagnation and moving to stay fit. This program was developed … END_OF_DOCUMENT_TOKEN_TO_BE_REPLACED

I have three premium flexibility programs that I offer and many of you have been clamoring for a bundle-package, so here it is! You could now buy the … END_OF_DOCUMENT_TOKEN_TO_BE_REPLACED

For anyone who wants better shoulder health, shoulder flexibility, a looser upper back and improved posture, this program takes all the guess work out of it to … END_OF_DOCUMENT_TOKEN_TO_BE_REPLACED

I don't know about you but nothing gets me fired up more than working on my abs. It's a unique muscle group that is utilized in every exercise and making it … END_OF_DOCUMENT_TOKEN_TO_BE_REPLACED

I've created this hip flexibility program for those that would like to improve their flexibility in an efficient manner, with a follow along video that only … END_OF_DOCUMENT_TOKEN_TO_BE_REPLACED

For those who have poor flexibility, tight hamstrings and want a simple program that will help them to get looser in a gentle, non-painful manner. In this … END_OF_DOCUMENT_TOKEN_TO_BE_REPLACED