CicLAvia turns 10 miles of LA streets into a safe, fun open space for walking, bicycling, skating, jogging and seeing the city in a whole new way.  It happened once in 2010, twice in 2011 and it may happen three times for 2012.

The first time I experienced CicLAvia, it was Sunday, October 20, 2010.  The streets were very quiet and instead of cars zooming by, we had bicycles casually passing by the thousands.  I got ready really late and didn’t bring my bicycle.  I just walked a couple miles with a friend and the entire time I thought, “Wow, why am I walking?  I always bike.”  The walking was relaxing though and I was super impressed by all amount of people that showed up.  After they opened the streets back up to normal traffic, I immediately realized that walking was not peaceful anymore.  I was breathing in exhaust fumes and my ears were inundated with the rumble of cars on the way back to my car.

I was happy to hear that for 2011, they decided to try it twice, one in April and one in October.  They were both great successes with nearly 100,000 participants every time.

After that ride was over, I thought, if this happens next year, this will slowly cultivate the culture of the city.  For the upcoming 2012 one, I’m hoping to be able to bring out the doubleplusmusic trailer as well.

Video to get a feel for CicLAvia

How to get to a CicLAvia section
You have several options, including group bicycle rides that depart from different parts of LA to get to the route.

Landmarks along the route by “The Militant Angeleno”

View The Militant Angeleno’s CicLAvia Tour! in a larger map

Can I enjoy CicLAvia if I don’t ride a bike?

Yes!  People are finding new uses for the street every time.  If you have a bicycle, I recommend you use it, but if you don’t, there are lots of activities along the route that you don’t need a bike to participate in.  At previous CicLAvias, people have been seen running, walking dogs, rollerblading, gathering together to play music, participating in impromptu tennis matches, dodgeball, picnicking, reading, conducting street theatre, yoga classes and parades!  It’s really all about how creative the people want to be and how comfortable they are doing whatever they want.

CicLAvia Walks: Join a walking tour to discover the riches of Los Angeles – its history, ecology, architecture and creativity from a new perspective and leisurely pace. 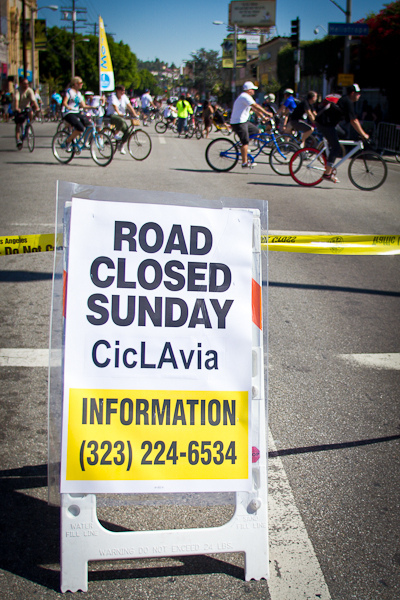 Looking for a simple and straightforward bodyweight-oriented strength training routine that doesn't take too much time? You're not the only one! A survey I … END_OF_DOCUMENT_TOKEN_TO_BE_REPLACED

In this day and age most people are working from home and struggling to find the balance between stagnation and moving to stay fit. This program was developed … END_OF_DOCUMENT_TOKEN_TO_BE_REPLACED

I have three premium flexibility programs that I offer and many of you have been clamoring for a bundle-package, so here it is! You could now buy the … END_OF_DOCUMENT_TOKEN_TO_BE_REPLACED

For anyone who wants better shoulder health, shoulder flexibility, a looser upper back and improved posture, this program takes all the guess work out of it to … END_OF_DOCUMENT_TOKEN_TO_BE_REPLACED

I don't know about you but nothing gets me fired up more than working on my abs. It's a unique muscle group that is utilized in every exercise and making it … END_OF_DOCUMENT_TOKEN_TO_BE_REPLACED

I've created this hip flexibility program for those that would like to improve their flexibility in an efficient manner, with a follow along video that only … END_OF_DOCUMENT_TOKEN_TO_BE_REPLACED

For those who have poor flexibility, tight hamstrings and want a simple program that will help them to get looser in a gentle, non-painful manner. In this … END_OF_DOCUMENT_TOKEN_TO_BE_REPLACED

This training routine is focused largely on increasing strength and muscle mass (aka muscular hypertrophy). If I had to sum up the routine in one fell swoop I … END_OF_DOCUMENT_TOKEN_TO_BE_REPLACED