I’m a huge fan of bicycling and combining my commute with public transportation.  Los Angeles becomes a completely different experience when I travel like this.  Other than the buses, which all have bicycle racks by the way, there are several rail lines and I am proud to announce that we will be having two new lines opening up this year!  The Expo Line and the Orange Line Extension!

The Expo Line is Metro’s all new 15 mile light rail that will allow travel from Downtown Los Angeles to Santa Monica beach in 45 minutes, even during rush hour!   This new line will provide significant relief to the most congested areas of LA because tons of people live, work and commute in West LA.  It will reuse the right-of-way that used to be for the Pacific Electric Railway up until 1953 and basically runs parallel to the 10 freeway!

Why did the Pacific Electric ever stop functioning in the first place?

Up until early 50’s, you could take the street car all the way from downtown to the Santa Monica pier!  GM, Firestone, Standard Oil and other companies got together and bought all the streetcar companies in dozens of cities in the United States for the sole purpose of having a monopoly on public transportation.  It is largely agreed nowadays that they bought them solely to convert the lines to bus routes or shut them down completely. This forced people all over the country to be dependent on cars.  GM and other companies were convicted in the courts in 1949 of conspiring to monopolize the control of buses and public transport across the country but by then, the damage was done and automobile dependency was already established.  This is known as the Great American Street Car Scandal if you want to read more about it.

Now, over half a century later they are using the same railway that was shut down to create the Expo Line.

The Expo Line starts from 7th/Flower in Downtown and ends in Culver City, adding 8 miles of light-rail that runs very closely parallel to the 10 freeway.

The “Expo Line” is different from the other Metro Rail lines because it is not named after a color but it will be shaded a light blue color on maps. This name comes from Exposition Boulevard which is named after Exposition Park.  The FEIR estimates that on a single weekday, more than 40,000 boarding’s will occur on Phase 1 alone.

Map of all the new stations that go along phase 1 of the expo line:

Phase 2 of the Expo Line will be completed in 2014

Phase 2 will extend westward from the Culver City Station and run all the way to 4th and Colorado Ave in Santa Monica, just a couple blocks away from the Santa Monica Pier.

Remember that bit I said about them reusing the right of way from the Pacific Electric Cars?  There are several tracks that run into buildings nowadays and this guy created a time lapse video of him walking along the entire path of Phase 2.  It’s pretty awesome.

The Orange Line Extension coming in the summer of 2012

If you’re familiar with the Orange Line, you know that it runs east/west from Woodland Hills and connects you directly to the North Hollywood Red Line station.

The Orange Line Extension will add four miles of NORTH/SOUTH dedicated bus way from the Canoga Ave Station connecting you to the Chatsworth Metrolink Station.  It will follow the same landscaping as the Orange Line with a dedicated bike path that runs parallel to it.  This will open in the summer of 2012. 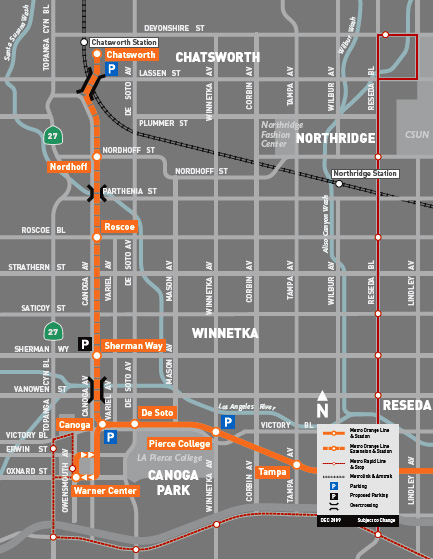 He is pushing something known as the “30/10 Initiative” really hard. The idea behind it is to take 30 years of public transportation projects that were going to get funded by Measure R and try to get them done in 10 years.  If you voted in the 2008 election, you might remember voting for Measure R. It got overwhelming support with over 2/3rds majority being for the bill. Measure R’s purpose was to provide funding for 12 major mass transit projects over 30 years time.

So now imagine all these things, being completed in 10 years time instead of 30.  If this works out, we will have statues and parks dedicated to Villaraigosa for decades on end.  Even if the plan becomes a 30/15 plan, that’s still incredible!  We would have a completely different city that one can only dream about.

“Happy are those who dream dreams and are willing to pay the price to make them come true.” -Anonymous

This is for anybody who wants to get strong and have fun with a gymnastics-inspired routine. It is highly bodyweight-exercise oriented (no external weights) and … END_OF_DOCUMENT_TOKEN_TO_BE_REPLACED

I don't know about you but nothing gets me fired up more than working on my abs. It's a unique muscle group that is utilized in every exercise and making it … END_OF_DOCUMENT_TOKEN_TO_BE_REPLACED

For those who have poor flexibility, tight hamstrings and want a simple program that will help them to get looser in a gentle, non-painful manner. In this … END_OF_DOCUMENT_TOKEN_TO_BE_REPLACED

Looking for a simple and straightforward bodyweight-oriented strength training routine that doesn't take too much time? You're not the only one! A survey I … END_OF_DOCUMENT_TOKEN_TO_BE_REPLACED

I have three premium flexibility programs that I offer and many of you have been clamoring for a bundle-package, so here it is! You could now buy the … END_OF_DOCUMENT_TOKEN_TO_BE_REPLACED

This training routine is focused largely on increasing strength and muscle mass (aka muscular hypertrophy). If I had to sum up the routine in one fell swoop I … END_OF_DOCUMENT_TOKEN_TO_BE_REPLACED

In this day and age most people are working from home and struggling to find the balance between stagnation and moving to stay fit. This program was developed … END_OF_DOCUMENT_TOKEN_TO_BE_REPLACED

I've created this hip flexibility program for those that would like to improve their flexibility in an efficient manner, with a follow along video that only … END_OF_DOCUMENT_TOKEN_TO_BE_REPLACED