Note: Toward the end of this article, there is an update to my progress pics, with even more tips.

Visually, there doesn’t seem to be a huge improvement, but there have been A LOT of changes. I feel like I am in a completely different body when I do yoga sometimes!

Since this is a completely visual comparison… For the front splits, I tried to keep the comparison useful by setting the back foot to be near the edge of the mat with the toes tucked. And basically my “gains” are how much more the front foot can extend ahead of the mat than before, which I marked with a red line.

I think most of my gains came in the first couple months and in the last month progress felt excruciatingly slow. But then again, I also got much more in touch with how to square the hips and use that to my advantage.

Before this challenge, I could touch my toes with straight legs. After just the first two weeks, I was already able to put my hands completely flat on the floor with my legs straight.  This was actually extremely rewarding because this extra pike compression is what’s needed to start practicing a press to handstand.

Early on in the challenge, I had a lot of dreams of things I could do once I achieved the splits.

The blog post about those “dreams” are right here. Some of those dreams came true:

Here are all the things I learned.

Every week, we had a check-in on reddit, and I learned a lot from others. We also had a facebook group for support, which was equally informational and motivational. Here are some of the tips I gathered throughout the challenge.

Prioritizing which splits to work on

Somewhere in the middle of the challenge I realized that it’s going to be impossible to get the pancake splits or middle splits if I was still struggling with the front splits. So I made the front splits my priority. I worked on the middle splits and pancakes only once a week. They still improved during those sessions, which is amazing. I also felt like the middle splits were too hard on the inner knee ligaments at times, so I wasn’t really crazy about pushing the limits with them frequently.

Q&A: Is it bad to do open front splits? (back leg turned out)

I was not sure how important keeping the hips squared was or turning the legs out to do the “open” front splits, so I asked this contortionist the question:

Question: “I want to achieve my front splits first. And I try A LOT to square my hips. And that’s what I am always striving for and it makes the stretch nice and intense when I go deeper. Is there anything wrong with sometimes letting them be unsquared? I never turn out my back leg. I’ve never tried it actually cause I wasn’t sure if it was bad to. Is that true? I tried searching on these topics and there doesn’t seem to be a solid answer put there. Lots of conflicting opinions. I figured no one better but you would know!”

Answer: You will not injure yourself by doing a turned out split. Lots of people, including dancers and rhythmic gymnasts, only ever do turned out splits because it creates longer lines for the legs, so there are certain times that it is better to do a turned out split if that is the effect you are looking for.

The reason it is better to do a squared split when you are training is because it is a deeper and more thorough stretch of the hip and hamstring muscles. A turned out split only stretches the outside of the back hip and the inside of the front hamstring. If you want to be able to do positions like needle (back leg scale, scorpion), contortion handstand, handstand split, and front leg scale (for pole dancers cocoon or rainbow marchenko) then you need to stretch the hips fully.

So there is nothing wrong with practicing turned out splits, just be sure to train your square splits as well because that will give you a deeper stretch.

Here’s how to square the hips in the front splits

Do lots of yoga to change things up

I kept trying different things. One week, all I did was a lot of yoga classes to change things up.  I also tried many different videos online. Here’s something new I tried called Happy Hamstrings. On another day I also followed Esther Ekharts hip opening video which was extremely gentle and gradual and chill. It was very soothing and calming for my nervous system. Afterwards I worked on my front splits and pancake splits and got deeper than I ever could.

Visualize yourself actually in the splits

Since the start of this challenge, I’ve always had trouble imagining/visualizing myself, ME, ANTO, being in the splits. I still have trouble with it, but my mind is slowly starting to paint the picture. And I’m inching along, quite literally every week.

Emmet Louis says, “This is a very important aspect that a lot of people gloss over. With the goals of changing your flexibility as an adult you’ve inhabited that body in its current form for however long. Its been programmed to move and behave a certain way when you start trying to change that you’ll encounter resistance. By beginning to believe and visualize yourself as flexible you can begin to remove that armour that has been built up and see a new you.”

Try twists such as…

Go in the middle splits. Place both hands on the floor, in the center right in front of you. And now… we go in a twist, by simply raising only one hand up to the sky (and look at that hand). Repeat the other side. Go deeper in your middle splits and keep on twistin’.

Try this twist in your front splits:

About 2 months into the challenge, I find myself able to TWIST, FORWARD BEND, BACK BEND in the front splits with much more comfort and it just feels OH SO GOOD AFTERWARDS!

Here’s a good ol’ back-bend to pry the front hip of the back-leg wide open! (Flex that glute when you do this!) 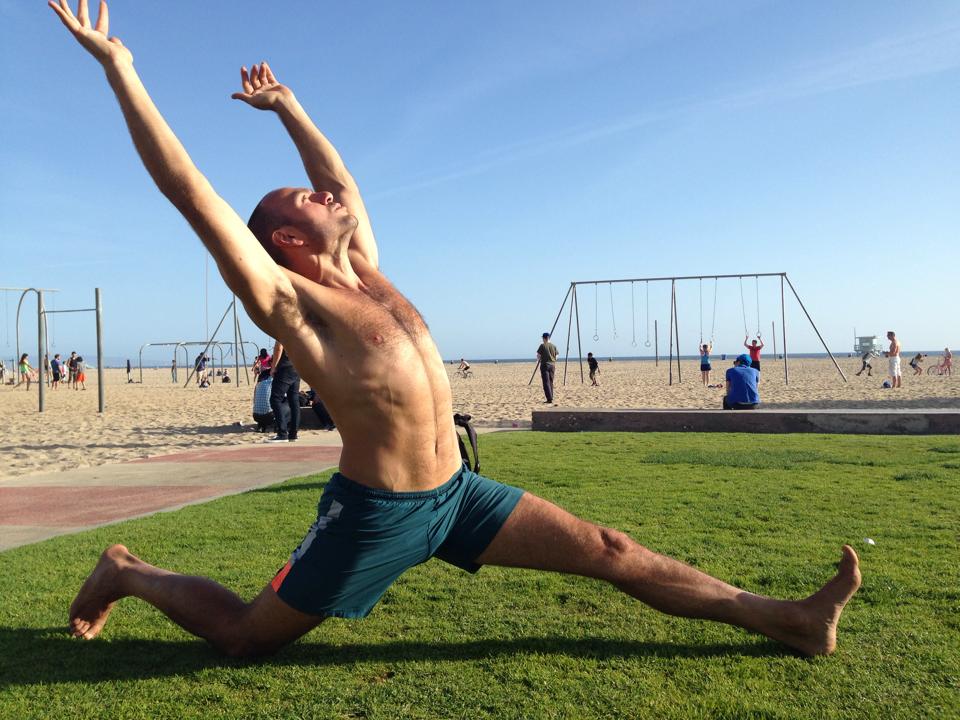 I have my own splits routine here, but there are many others that everyone should also read!

Couch stretch is the ultimate and will keep you busy for months (if not all year):

If you think you’ve exhausted the couch stretch then move on to this deep lunge  – aim at sinking lower and lower until your hips touch the floor!

Something to try (maybe you already do this) is to move from one side split to the other and back. Feels good.

Build strength in those thighs.

Everything I read (about middle splits especially) is that you need to build up the strength in your legs to sort of convince your body that it can actually do the splits. One of the reasons you reach a limit in your flexibility/stretching is because the muscle contracts to not allow yourself to go further, because it doesn’t feel it can actually control or feel safe to go further.

You don’t have to stretch every single day

When I first started the challenge, I was trying to do it everyday. But I found that sometimes the inflammation or soreness was still quite high so I didn’t feel like it was a good idea to stretch again so soon. I ended up finding myself stretching vigorously only about 3-4x a week. I felt like my body needed more rest days and going everyday would burn me out way too fast, especially because I’m trying to do many sets in one session.

While in the front splits, move the ankle of your front foot clockwise and counter clockwise. Feels good.

Thomas Kurz at age 50 doing front and side splits

How to do a Split with Dick Hartzell

Update! I finished my second round of the 90-days splits and here is what I learned!

First, some progress pics… Photos go from March to May to September 2014

Analysis of the photos:

Here’s some stuff I learned off the top of my head for the second round:

So far, you might have noticed that I asked my brother to help push me deeper in the couch stretch and that I used a dumbbell to get deeper in my front splits. These external forces, what with partner stretching or using weights, I feel have become imperative for a strong guy like me. The amount of power my leg muscles have to resist the stretch if I only use my own bodyweight and antagonistic muscles, is insane. At this point, having someone push me deeper, I feel is not just a huge help, but necessary, because my own bodyweight isn’t enough. Note: I don’t just get pushed deeper into a stretch without thinking… I communicate with my partner and tell them when to push me deeper… I will do PNF (contract relax) style stretching to help me get deeper and with control and synchronize their push with it.

In this day and age most people are working from home and struggling to find the balance between stagnation and moving to stay fit. This program was developed … END_OF_DOCUMENT_TOKEN_TO_BE_REPLACED

I have three premium flexibility programs that I offer and many of you have been clamoring for a bundle-package, so here it is! You could now buy the … END_OF_DOCUMENT_TOKEN_TO_BE_REPLACED

For anyone who wants better shoulder health, shoulder flexibility, a looser upper back and improved posture, this program takes all the guess work out of it to … END_OF_DOCUMENT_TOKEN_TO_BE_REPLACED

I don't know about you but nothing gets me fired up more than working on my abs. It's a unique muscle group that is utilized in every exercise and making it … END_OF_DOCUMENT_TOKEN_TO_BE_REPLACED

I've created this hip flexibility program for those that would like to improve their flexibility in an efficient manner, with a follow along video that only … END_OF_DOCUMENT_TOKEN_TO_BE_REPLACED

For those who have poor flexibility, tight hamstrings and want a simple program that will help them to get looser in a gentle, non-painful manner. In this … END_OF_DOCUMENT_TOKEN_TO_BE_REPLACED