A friend of mine was just asking me for advice on the best way to start losing weight.  I recommended they simply start logging their food (calorie counting) using the MyFitnessPal app on the phone.  The whole idea is if you simply eat less calories than you burn in a day, overtime slowly but surely you will start dropping the weight.  The smartphone app is even more efficient than the website.  I wouldn’t even have been able to keep my streak up if I didn’t have the app probably.

But anyway, I asked her what her goals are and she said she wanted to lose 10-15 pounds and that she “lost 5 pounds already but that is negligible.”  And I was like whoaaaaaaa there!  Five pounds of fat is NOT negligible! If you knew what five pounds of fat looked like, you’d be proud, or maybe throw up! Haha!

So here what “just” FIVE pounds of fat looks like… 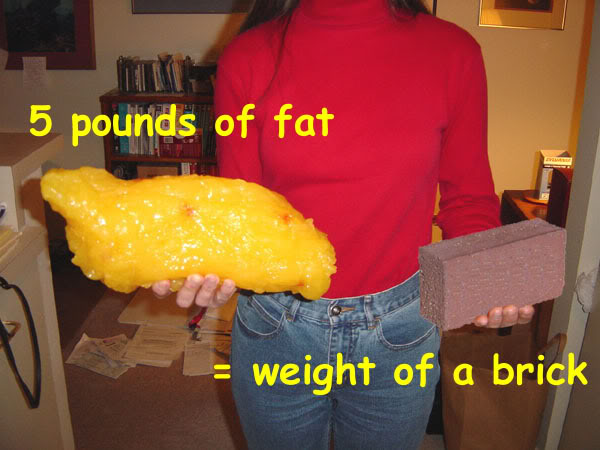 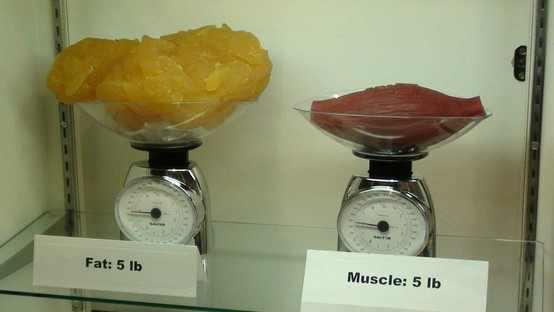 I’ll leave that up to your imagination.  But you may be wondering if 5 pounds is THAT significant-looking, then how does 50lbs of fat even fit in the body!

Well, fat is not just stored around your belly and thighs like a belt.  The sticky fat gets embedded between all your internal organs and that’s known as visceral fat.  This visceral fat is much more dangerous than the cosmetic (subcutaneous; under the skin) version because this “organ fat” is what truly affects your cardiovascular system.

But anyway, back to basics… even if you lose just one pound of fat… look how significant it is!

So how do we lose just one pound of fat a week?

You could also do some exercise that burns 500 calories in an hour, but it’s physically SO much easier to simply eat a little less, than have to vigorously swim laps for one hour straight to create the same 500 calorie deficit.  In reality, it’s best to do a little bit of both.  Eat at a slight deficit everyday and throw in your favorite sport/hobby a few times a week.  And if you feel some hunger, don’t run and immediately get some stupid snack just because you think your body is going to shut down cause you haven’t ate for a couple hours.  Hunger isn’t a bad thing. Think of it as fat leaving the body.

Do you have questions in regards to your training, diet or habits in general? I bet you do because I get messages every single day from people looking for … END_OF_DOCUMENT_TOKEN_TO_BE_REPLACED

Looking for a simple and straightforward bodyweight-oriented strength training routine that doesn't take too much time? You're not the only one! A survey I … END_OF_DOCUMENT_TOKEN_TO_BE_REPLACED

In this day and age most people are working from home and struggling to find the balance between stagnation and moving to stay fit. This program was developed … END_OF_DOCUMENT_TOKEN_TO_BE_REPLACED

I have three premium flexibility programs that I offer and many of you have been clamoring for a bundle-package, so here it is! You could now buy the … END_OF_DOCUMENT_TOKEN_TO_BE_REPLACED

For anyone who wants better shoulder health, shoulder flexibility, a looser upper back and improved posture, this program takes all the guess work out of it to … END_OF_DOCUMENT_TOKEN_TO_BE_REPLACED

I don't know about you but nothing gets me fired up more than working on my abs. It's a unique muscle group that is utilized in every exercise and making it … END_OF_DOCUMENT_TOKEN_TO_BE_REPLACED

I've created this hip flexibility program for those that would like to improve their flexibility in an efficient manner, with a follow along video that only … END_OF_DOCUMENT_TOKEN_TO_BE_REPLACED

For those who have poor flexibility, tight hamstrings and want a simple program that will help them to get looser in a gentle, non-painful manner. In this … END_OF_DOCUMENT_TOKEN_TO_BE_REPLACED