In 1965 Gordon Moore came out with a law that says that the number of transistors that can be placed inexpensively on an integrated circuit doubles approximately every 18-24 months.  Here’s a graph that demonstrates the law that has held true for over 50 years and is estimated to continue until at least 2015-2020. 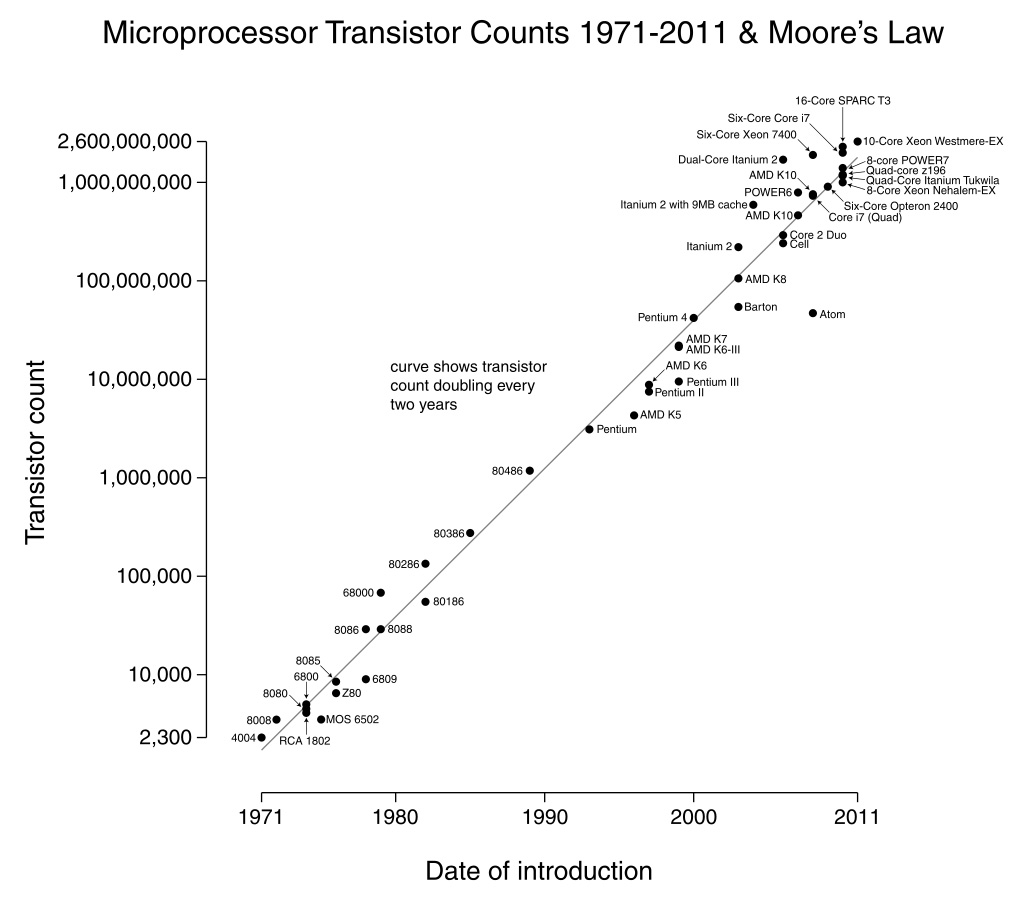 Drawing from Moore’s law, Mark Kryder in 2005 said that areal storage density doubles annually, a phenomenon that had come to be known as Kryder’s Law. In 1990, my computer had 4mb RAM with a 80-megabyte hard drive with Adobe Photoshop 3.0 (among other apps) and had room to spare. 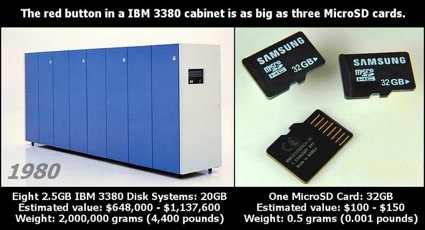 Nielsen’s law states that network connection speeds for high-end home users would increase 50% per year, or double every 21 months.

Butter’s Law of Photonics says that the amount of data coming out of an optical fiber is doubling every nine months and so the cost of it decreases by half in the same time as well.

Hendy’s law says that the number of pixels per dollar found in digital cameras will double every year.   Barry Hendy of Kodak Australia plotted “pixels per dollar” as a basic measure of value for a digital camera and demonstrated the historical linearity of the trend of LCD screens, LED screens and resolution. 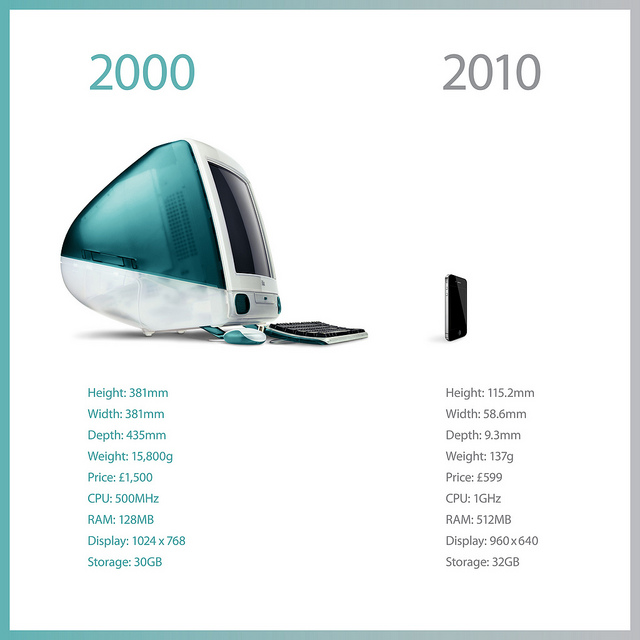 So what will hard drive capacity be like in a decade?

After that the doubling rate may lengthen to 3 years instead of 2 years so..

In 1995, Niklaus Wirth came out with Wirth’s law, a computing adage that says software is getting slower more rapidly than hardware becomes faster due to bloat.  A humorous variant came out of this called Gates’ Law, based on Bill Gates, due to Microsoft’s software getting more bloated year after year.

Gates law: The speed of commercial software slows down by half every 18 months, thereby negating the benefits of Moore’s law.  In 2008, Randal C. Kennedy, did performance tests between successive versions of Microsoft Office.  He found that Office 2007, on a modern computer, took twice as longer to perform the same tasks than a year-2000 equivalent computer with Office 2000.

I suppose if hard drive capacities didn’t increase, programmers would have been forced to code much more tightly and efficiently.  Luckily, we have gigantic, fast hard drives. 🙂

Looking for a simple and straightforward bodyweight-oriented strength training routine that doesn't take too much time? You're not the only one! A survey I … END_OF_DOCUMENT_TOKEN_TO_BE_REPLACED

I have three premium flexibility programs that I offer and many of you have been clamoring for a bundle-package, so here it is! You could now buy the … END_OF_DOCUMENT_TOKEN_TO_BE_REPLACED

This training routine is focused largely on increasing strength and muscle mass (aka muscular hypertrophy). If I had to sum up the routine in one fell swoop I … END_OF_DOCUMENT_TOKEN_TO_BE_REPLACED

For anyone who wants better shoulder health, shoulder flexibility, a looser upper back and improved posture, this program takes all the guess work out of it to … END_OF_DOCUMENT_TOKEN_TO_BE_REPLACED

I've created this hip flexibility program for those that would like to improve their flexibility in an efficient manner, with a follow along video that only … END_OF_DOCUMENT_TOKEN_TO_BE_REPLACED

I don't know about you but nothing gets me fired up more than working on my abs. It's a unique muscle group that is utilized in every exercise and making it … END_OF_DOCUMENT_TOKEN_TO_BE_REPLACED

This is for anybody who wants to get strong and have fun with a gymnastics-inspired routine. It is highly bodyweight-exercise oriented (no external weights) and … END_OF_DOCUMENT_TOKEN_TO_BE_REPLACED

In this day and age most people are working from home and struggling to find the balance between stagnation and moving to stay fit. This program was developed … END_OF_DOCUMENT_TOKEN_TO_BE_REPLACED