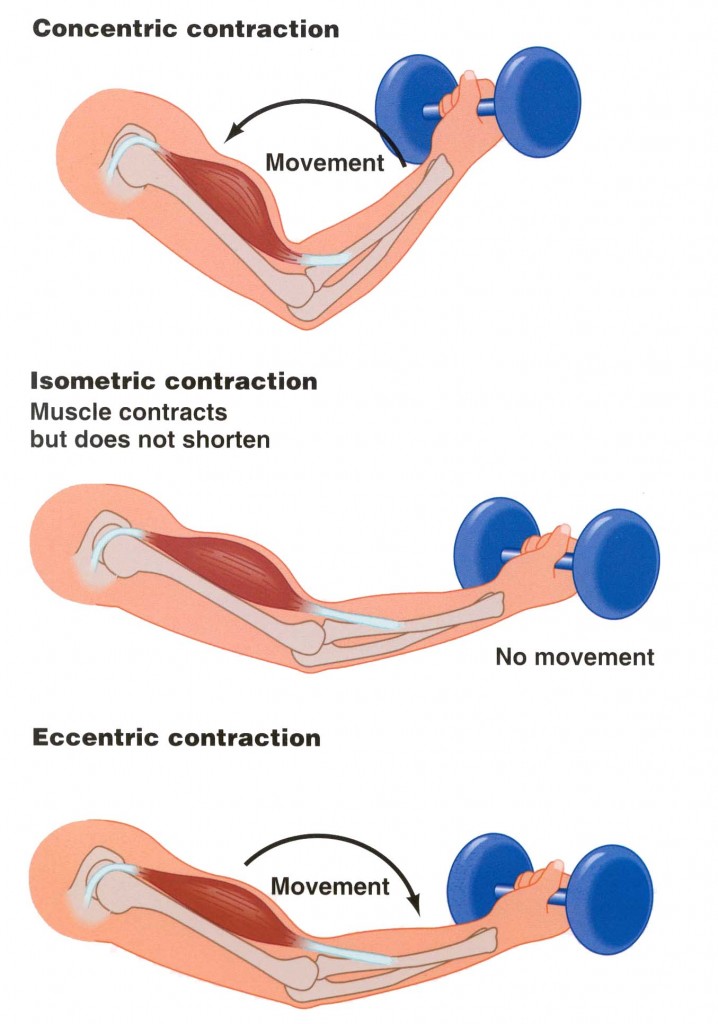 There are three phases involved with movement…

2. Now when you do that bicep curl, if you stop at any one point and hold it there, it becomes an isometric exercise. Iso means same. Metric means length. The muscle fibers are remaining the same length. Yoga is full of both dynamic and isometric movements. Like if you were to just be holding dolphin plank or dolphin down-ward dog (plank or downward dog on your forearms).

3. Eccentric is the lowering phase of a movement when the muscles under contraction are lengthening.  So when you’re slowly lowering the dumbbell under control back to the starting position, that’s the eccentric phase. This is also known as the “negative” phase.

For this reason, eccentrics and isometrics are often prescribed or programmed as a prerequisite especially when the concentric is not possible.  This is very common when it comes to bodyweight exercises. For example, if you can’t do a single pull up, you may be able to do a negative pull up where you lower yourself down slowly from the top.  And the benefit of the eccentric is also that it can help you train a movement/motor pattern repeatedly in a safer manner.  Isometrics are often useful as well when working on flexibility in the end-range: That is to say when you reach the end of your range of motion on an exercise, if you keep contracting/holding there, you will build strength in that part because you get stronger in the range that you work in and time under tension is your friend.

Another interesting bit about eccentric exercises: Eccentric exercises also generate the most soreness as it causes the most micro-trauma. For an Olympic Powerlifter, since they don’t have to lower the weight down (they just drop it), the lack of eccentric loading minimizes muscle damage which results in less soreness and allows faster recovery time.

Do you have questions in regards to your training, diet or habits in general? I bet you do because I get messages every single day from people looking for … END_OF_DOCUMENT_TOKEN_TO_BE_REPLACED

Looking for a simple and straightforward bodyweight-oriented strength training routine that doesn't take too much time? You're not the only one! A survey I … END_OF_DOCUMENT_TOKEN_TO_BE_REPLACED

In this day and age most people are working from home and struggling to find the balance between stagnation and moving to stay fit. This program was developed … END_OF_DOCUMENT_TOKEN_TO_BE_REPLACED

I have three premium flexibility programs that I offer and many of you have been clamoring for a bundle-package, so here it is! You could now buy the … END_OF_DOCUMENT_TOKEN_TO_BE_REPLACED

For anyone who wants better shoulder health, shoulder flexibility, a looser upper back and improved posture, this program takes all the guess work out of it to … END_OF_DOCUMENT_TOKEN_TO_BE_REPLACED

I don't know about you but nothing gets me fired up more than working on my abs. It's a unique muscle group that is utilized in every exercise and making it … END_OF_DOCUMENT_TOKEN_TO_BE_REPLACED

I've created this hip flexibility program for those that would like to improve their flexibility in an efficient manner, with a follow along video that only … END_OF_DOCUMENT_TOKEN_TO_BE_REPLACED

For those who have poor flexibility, tight hamstrings and want a simple program that will help them to get looser in a gentle, non-painful manner. In this … END_OF_DOCUMENT_TOKEN_TO_BE_REPLACED