There’s a misconception that every microorganism is dangerous and the only good microbe is a dead bacteria.  Kind of like the Sarah Palin view of microbiology.  Only 10-15% of all microbes are infectious or have been shown to be infectious.  That’s rather sobering and so is the fact that life on earth could not exist without microorganisms.  They were the first accepted inhabitants of the world.   The vast majority of organisms are in fact, useful.  In 2008, water bears (tardigrades) were the first animals demonstrated to be able to survive the vacuum of space. They are virtually indestructible and can survive being blasted with radiation, intense pressures and years of desiccation. Specimens were launched into space by Swedish scientists and they returned unharmed after eight days. 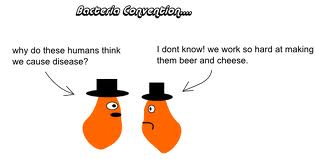 The cycles of nature – sulfur, carbon, nitrogen/phosphorus. We’ll talk more about this in the future.

Biological insect control: Sporoforma can be sprayed on crops which then insects attach to it and die. This is much more favorable that spraying DDT.

Bioremediation: How did they clean the gulf oil spill?  They sprayed it with dispersants and microorganisms.

Toxic waste degradation: There are bacteria that live in radioactive material! Scientists could find any bacteria to get rid of anything that’s in the environment.

Garbage disposal / Sewage treatment: The fungi, Pestalotiopsis microspora, is able to survive on a steady diet of polyurethane alone and, which is even more surprising can do this in an anaerobic (oxygen-free) environment. Perfect for conditions at the bottom of a landfill.

Biofilms are ubiquitous: Nearly every species of microorganism, not only bacteria and archaea, have mechanisms by which they can adhere to surfaces and to each other. Biofilms will form on virtually every non-shedding surface in a non-sterile aqueous (or very humid) environment.  Plaque is a biofilm on the surfaces of your teeth. This accumulation of microorganisms subject the teeth and gums to high concentrations of bacterial metabolites which results in dental disease.  They can grow in showers very easily since they provide a moist and warm environment for the biofilm to thrive.

MRSA:  Staphylococcus aureus is a common type of bacteria (germ) that is often found in the nose, but can also grow in wounds and other sites of the body, where the infection may cause great harm. Methicillin is an antibiotic or medication that is used to treat these infections. In the early days of antibiotic therapy, Penicillin was used to treat staph infections, but gradually the organism became resistant to most antibiotics except for methicillin. Over time, the bacteria have become resistant to methicillin as well, so this antibiotic is no longer able to kill the germ. If a person has an infection with this germ that cannot be treated with methicillin, the person is said to have Methicillin-resistant Staphylococcus aureus, or MRSA, and must be treated with other antibiotics.  They’ve now found MRSA into cattle.  We’re picking up MR organisms from the animals we eat because they too are fed with antibiotics. MRSA used to only be in the hospitals, but now it’s both in the hospital and community.

VRE: Enterococci are bacteria that are normally found in the bowel and vagina of humans. When they get outside these areas, these bacteria can cause infections of the urinary tract, wounds, or bloodstream. Vancomycin is an antibiotic that usually works to treat these infections. Infections caused by Enterococci that are resistant to Vancomycin are called Vancomycin-resistant Enterococci, or VRE, and are very difficult to treat.

C. Difficile: Clostridium difficile is a bacterium that can cause symptoms ranging from diarrhea to life-threatening inflammation of the colon. This is a huge problem for older adults in assisted living centers and typically occurs after the use of antibiotic medications.

Malaria: 3-6 million people a year die.  Not many in the western world but many of them are children in the Caribbean and Africa.

Hepatitis C: The latest denizen on the block is Hepatitis C. It’s estimated that 30-40% of Americans have Hepatitis C because of it’s extremely long latency period.  In the past several months, more people have died from Hepatitis C than died from HIV.  It’s the next common plague.  Yes, microbial infections are a big part of our world.

And of course, emerging infectious diseases which we talked about earlier.

This is for anybody who wants to get strong and have fun with a gymnastics-inspired routine. It is highly bodyweight-exercise oriented (no external weights) and … END_OF_DOCUMENT_TOKEN_TO_BE_REPLACED

In this day and age most people are working from home and struggling to find the balance between stagnation and moving to stay fit. This program was developed … END_OF_DOCUMENT_TOKEN_TO_BE_REPLACED

For those who have poor flexibility, tight hamstrings and want a simple program that will help them to get looser in a gentle, non-painful manner. In this … END_OF_DOCUMENT_TOKEN_TO_BE_REPLACED

For anyone who wants better shoulder health, shoulder flexibility, a looser upper back and improved posture, this program takes all the guess work out of it to … END_OF_DOCUMENT_TOKEN_TO_BE_REPLACED

I have three premium flexibility programs that I offer and many of you have been clamoring for a bundle-package, so here it is! You could now buy the … END_OF_DOCUMENT_TOKEN_TO_BE_REPLACED

This training routine is focused largely on increasing strength and muscle mass (aka muscular hypertrophy). If I had to sum up the routine in one fell swoop I … END_OF_DOCUMENT_TOKEN_TO_BE_REPLACED

Looking for a simple and straightforward bodyweight-oriented strength training routine that doesn't take too much time? You're not the only one! A survey I … END_OF_DOCUMENT_TOKEN_TO_BE_REPLACED

I don't know about you but nothing gets me fired up more than working on my abs. It's a unique muscle group that is utilized in every exercise and making it … END_OF_DOCUMENT_TOKEN_TO_BE_REPLACED