This project is my attempt at organizing the amazing resources Ido Portal has created for us. When I first started trying to make sense of his videos and blog posts, I found that the information was in disarray. In my quest for understanding the content he has available so that I could practice it myself, this page is the result. I hope it helps you MOVE.

Note: If you’re interested in strength and skill training on the rings and floor, I have created this rings-oriented intermediate bodyweight training routine that combines my love for gymnastics strength training and yoga and things from this floreio project.

1/8/2015: All right, Ido has started updating things. So I will update this page with the latest.  He’s started using instagram more and more.

10/29/2015: WARNING: If you share this page, or any other helpful resource, on Ido Portals Movement Culture group on Facebook (which I am banned from), it WILL get deleted and you will most likely be banned from the group as well. The MC group does not transparently promote people who teach movement. It’s a huge Ido Portal “circle-jerk” where his teachings are held up against all others, probably to get more business/money out of it. (Btw, his business practices in the USA are shit, too, as a fair warning.) You WILL also get banned if you share ANY helpful tutorial or video by anyone else (even if it’s incredibly GOOD info such as by Emmet Louis, GMB, GymnasticBodies, Tom Weksler, etc!) The guy sees everyone else as competition apparently. So you’ve been warned!

4/18/2015:  If you’re interested in strength and skill training on the rings and floor, I have created this rings-oriented intermediate bodyweight training routine that combines my love for gymnastics strength training and yoga and things from this floreio project.

1/21/2015: The floreio project will always remain free, and I have gone the extra mile to create a mobile/printer friendly version of the Mobility section.

11/07/2014: Updated the “Gatherings” section with written details of the variations.

10/11/2014: Just a tiny change… made the “info/intro” section collapsed so it doesn’t  clutter up the space when you’re looking on your mobile phone.

Ido Portal recently did a Q&A on reddit which I have added to the podcast section. He didn’t answer every question or give tremendously helpful info. But, some great info came out regardless!  Most notably, insight as to the wrist strengthening exercises, which I have updated in the mobility section.  Palm pulses were already in the list, but I added this clip of Johnny Sapinoso doing them in a handstand (handstand palm pulses) so you could see how far you could take these things.

Made a GIF of this Shoulderstand Roll and added it to the strength section (even though it’s really skill work but whatever).

7/9/2014: The floreio section was too long for my liking, so I moved the area where you could combine floreio movements into another blog post all together here: Combining Floreio Movements

7/2/2014: Added, prerequisite for rotations into high bridge (rotations in the low bridge!)

7/1/2014: Fixed formatting errors that somehow were messed up from god knows what.

Added cruel-tutelage of ido portal video featuring many of his speeches from his workshops.

6/30/2014: Stopped the html5 clips from autoplaying to reduce
processor load.

Ido a ‘movement specialist’ that has been inspiring the world to MOVE, get MOBILE and STRONG.  He believes that one should master their own body with control before even trying to move heavy objects outside of oneself. Watch this video to get a better idea of what he preaches.

How to use this page?

This is a general outline of how the workouts may go…

I have organized this page and his videos according to this outline to best match the workout routines he has posted. If you have questions about particular moves, look for the “More Info” link that will take you to the relevant blog post with complete details.

If there’s anything you do out on this page, do mobility work. We need to do it. All of us. That’s why I made GIF/HTML5 clips of them.

ProTip: If you do all the squat (or shoulder) mobility all in one go, it may be too tiring and you lose quality. To give your legs and shoulders a break, alternate between the four mobility sequences below. Start with squat clinic, then move onto shoulder rom/stabilization, then do squat clinic 2.0, then finish with scapular mobilization. That is the way Ido has ordered this stuff in his old routines.

All the floreio work always starts/ends with a squat so you bet your ass you can’t skip this.

These require the use of a resistance band.

Tips: It’s impossible to recommend the ‘perfect’ band because everybody has different levels of strength and flexibility. So I recommend you just get a set like this that comes with multiple resistances and have handles, allowing you to do both arms at once.

Ido’s thoughts: “Thera Bands may be good, but test them first and make sure you get enough tension out of them. For me, even the stronger ones are a bit too easy, but it may be suitable for you.”

If you have a theraband, I have found that doubling up the black theraband (black=”special heavy”) feels perfect for shoulder dislocates but too easy for everything else. One step heavier than that (the silver one; “super heavy”) feels more effective for strengthening the rotator cuff. But again, these don’t have handles and it’s better you just buy that set so you are good for life. An old/used bicycle tube, free at any bike shop, may work as well.

I found this article by a student that had attended his workshop and shared the ankle series. 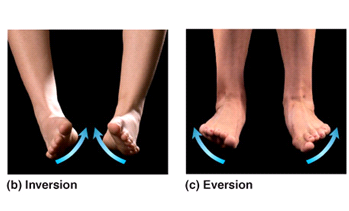 “Our ultimate goal with the Floreio practice is to be able to flow freely on the ground, using our body and the space around us to create this physical expression.” -Ido

Ido Portal has combined his skills from capoeira and other movement arts to come up with what he calls the Art of Floreio. He has poured in countless hours of work into breaking down these movements into their SIMPLEST motions so that even beginners could have a starting point. I have done my best to organize them. The beauty of these movements are that they build active flexibility and strength in new ranges you’ve probably never had to get into before. Plus, they’re really, really fun and make your brain work differently. (Ido says the human mind craves movement complexity.) And if you do any of these for time (e.g., Role for 3 minutes nonstop), it doubles as metabolic conditioning.

These are the 6 bread and butter movements. Start by learning the beginner versions of each.

“Notice the quality of movement, the fluidity and control. These things are what makes this practice unique. Quality is central here. Its better to shoot for an easier variation, but perform it with control, quality and fluidity, than to do a harder one but not controlled, ugly and rigid.” – Ido

For someone used to only getting into a static high bridge but never a low bridge or rotating within it, this is quite a great feeling.

6. Queda De Rins (‘Stab/Fall of the Kidneys’) (More Info here and this article)

Note: Please make sure you did the wrist mobility drills as it’s imperative you avoid unnecessary wrist pain during hand-balancing work! (It can put you out for days/weeks!)

Martial artists often study animals and mimic them to add to their movement repertoire and to capture the ‘essence’ of the animal behavior. Each movement provides a different and valuable component in the workout, from mobility to strength endurance, stabilization and more. (More info)

Supplemental info: The ‘walking while swinging into HS’ with alternating the kick up leg has vastly improved my control in a handstand and helped even me out.  The duck walk, horse walk and ostrich walk are sometimes in the “mobility” section of Ido’s old routines.

Full Body Conditioning Combinations (More Info) Note: These side push ups from pistols look easy. THEY ARE NOT. If you want to get better at pistols, check out my video tutorial here.

Ido’s Workout Routines from his blog

These routines are well thought out and chock full of good info. Each routine has an option for beginner or intermediate.

Most of his blog posts (and especially the comments) are worth reading, but these are the highlights that are a must:

You’ll find interesting posts my Ido here, and if you want more info, he usually replies once or twice to peoples questions in the comments.

Ido was removed from GymnasticBodies (for whatever reason) but his posts are still on there as “Guest_Ido_Portal_*”. These are a few posts:

(PLEASE FORGIVE THE MESS, THIS SECTION IS UNDER CONSTRUCTION, SHOULD BE DONE BY LATER TODAY)

Ido Portal recently had a hanging challenge, for people to hang for 7 minutes a day (non-consecutively).  The number 7 isn’t really that important. It’s more just to help inject a simple movement (hanging off things) into their lives!

He created a blog post here about it and so did I. 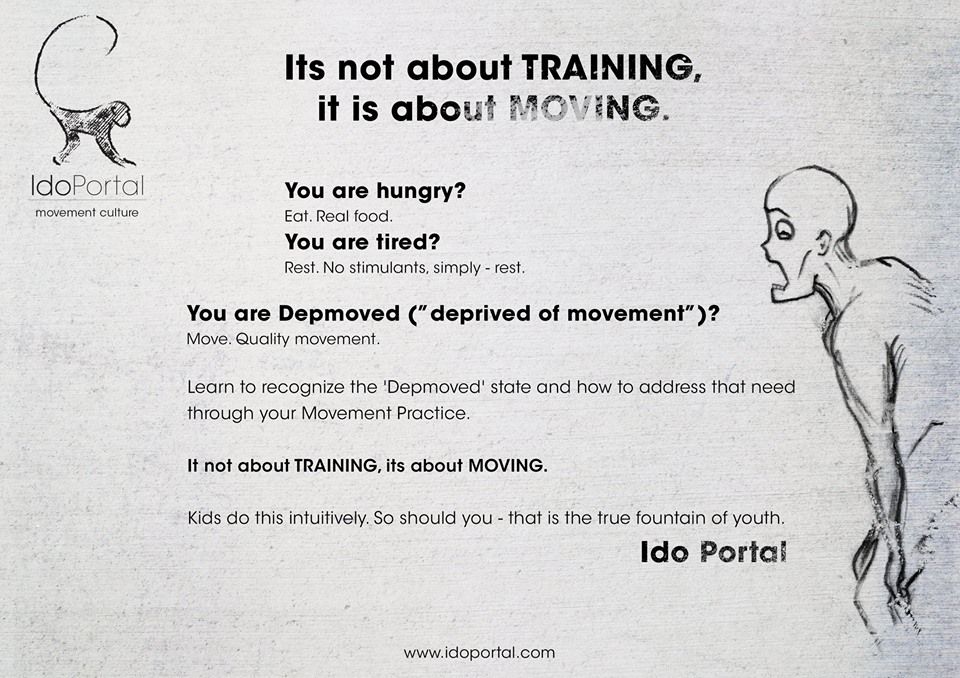 In closing, Ido Portal is an inspiration like no other, not only because his movement quality is impeccable and I could only dream of moving as good as him, but because he’s been inspiring thousands upon thousands of people to MOVE, get more MOBILE and STRONG in very practical ways. I hope this page has inspired you to move in novel ways.

Check out my other compendiums!

Do you have questions in regards to your training, diet or habits in general? I bet you do because I get messages every single day from people looking for … END_OF_DOCUMENT_TOKEN_TO_BE_REPLACED

Looking for a simple and straightforward bodyweight-oriented strength training routine that doesn't take too much time? You're not the only one! A survey I … END_OF_DOCUMENT_TOKEN_TO_BE_REPLACED

In this day and age most people are working from home and struggling to find the balance between stagnation and moving to stay fit. This program was developed … END_OF_DOCUMENT_TOKEN_TO_BE_REPLACED

I have three premium flexibility programs that I offer and many of you have been clamoring for a bundle-package, so here it is! You could now buy the … END_OF_DOCUMENT_TOKEN_TO_BE_REPLACED

For anyone who wants better shoulder health, shoulder flexibility, a looser upper back and improved posture, this program takes all the guess work out of it to … END_OF_DOCUMENT_TOKEN_TO_BE_REPLACED

I don't know about you but nothing gets me fired up more than working on my abs. It's a unique muscle group that is utilized in every exercise and making it … END_OF_DOCUMENT_TOKEN_TO_BE_REPLACED

I've created this hip flexibility program for those that would like to improve their flexibility in an efficient manner, with a follow along video that only … END_OF_DOCUMENT_TOKEN_TO_BE_REPLACED

For those who have poor flexibility, tight hamstrings and want a simple program that will help them to get looser in a gentle, non-painful manner. In this … END_OF_DOCUMENT_TOKEN_TO_BE_REPLACED