Prolactin, a non-tropic hormone: The word lacto- means milk. Lactose is the sugar in milk. If a women is lactating, it means she’s producing milk. Prolactin is the hormone that stimulates the mammary glands to produce milk.

If a woman has prolactin causing milk production but no oxytocin, then what happens?  Remember oxytocin is the non-tropic hormone that causes milk to be squirted out (and uterine contractions).  If they are producing milk and it’s not coming out, then they will have very, very full breasts.

There’s no negative feedback loop from the mammary gland for prolactin. Milk comes out the nipple, so it can’t loop back to the pituitary. Prolactin Releasing Hormone (PRH) and nursing of a baby stimulate the release of Prolactin. Remember the hypothalamic-pituitary portal veins are what carry the Prolactin Releasing Hormone (PRH). Dopamine, sometimes called prolactin inhibitory hormone, inhibits the secretion of prolactin.  Weaning of the baby inhibits the release of prolactin as well.  The textbooks might also call it prolactin-inhibiting factor or prolactostatin.

Lactation (the combination of milk production and secretion) is illustrated in the figure below: Suckling by the infant stimulates nipple mechanoreceptors that are connected by neural circuits to neurosecretory cells in the hypothalamus. One type of neurosecretory cell releases the hormone oxytocin from the posterior pituitary. These cells are stimulated by suckling.  Oxytocin causes milk ejection, in which smooth muscle-like cells called myoepithelial cells contract and push the milk from the glands into the breast ducts so that the infant can easily suck it out. The other neurosecretory cell that is affected is dopamine.  The sucking action of a nursing infant causes a reduction in hypothalamic secretion of dopamine (PIH).  In other words, suckling, via neural connections inhibits dopamine secretion, increasing prolactin secretion and stimulating milk production in the breast. 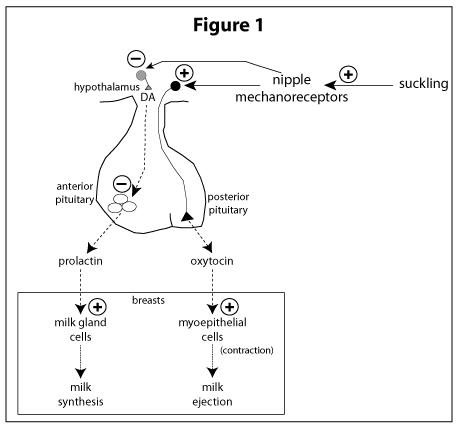 Do you have questions in regards to your training, diet or habits in general? I bet you do because I get messages every single day from people looking for … END_OF_DOCUMENT_TOKEN_TO_BE_REPLACED

Looking for a simple and straightforward bodyweight-oriented strength training routine that doesn't take too much time? You're not the only one! A survey I … END_OF_DOCUMENT_TOKEN_TO_BE_REPLACED

In this day and age most people are working from home and struggling to find the balance between stagnation and moving to stay fit. This program was developed … END_OF_DOCUMENT_TOKEN_TO_BE_REPLACED

I have three premium flexibility programs that I offer and many of you have been clamoring for a bundle-package, so here it is! You could now buy the … END_OF_DOCUMENT_TOKEN_TO_BE_REPLACED

For anyone who wants better shoulder health, shoulder flexibility, a looser upper back and improved posture, this program takes all the guess work out of it to … END_OF_DOCUMENT_TOKEN_TO_BE_REPLACED

I don't know about you but nothing gets me fired up more than working on my abs. It's a unique muscle group that is utilized in every exercise and making it … END_OF_DOCUMENT_TOKEN_TO_BE_REPLACED

I've created this hip flexibility program for those that would like to improve their flexibility in an efficient manner, with a follow along video that only … END_OF_DOCUMENT_TOKEN_TO_BE_REPLACED

For those who have poor flexibility, tight hamstrings and want a simple program that will help them to get looser in a gentle, non-painful manner. In this … END_OF_DOCUMENT_TOKEN_TO_BE_REPLACED