Mannitol provides the substrate for fermentation and makes the medium differential.   The salt makes the medium selective because its concentration is high enough to dehydrate and kill most bacteria.  Staphylococci thrive in the medium largely because of their adaptation to salty habitants, such as human skin.  Most Staphylococci are able to grow on MSA but don’t ferment the mannitol so the growth appears with the unchanged pink or red medium color. S. aureus, however, ferments mannitol, which produces acid and lowers the pH of the medium.  The result is bright yellow colonies.  This test is specifically for isolating and differentiating S. Aureus.

In this medium there is bile and esculin. Bile is the selective agent used to separate Streptococcus bovis and enterococci from other streptococci. Esculin is present because only the group D streptococci and enterococci can hydrolyze esculin in the presence of bile salts.

This is a selective and differential medium for the growth of gram-negative bacteria and contains lactose and it’s dark brown colored.  If the bacteria on it can ferment the lactose, the acidity turns the dye into a bright pink color.

This is a complex, selective and differential medium used to isolate fecal coliforms.  The dyes inhibit the growth of gram-positive organisms (like the MacConkey) but they also react with lactose fermenters, turning the growth dark purple or black.  If it’s a black growth with green metallic sheen, it’s likely E. coli.  If it’s a pink color, it’s a less vigorous lactose fermenter.  If there is a lack of color, it’s a nonfermenter.

Normally this broth looks clear/straw-colored and the top is slightly pink due to oxidation of the dye with its contact to oxygen. This medium can be used to grow microbes representing all levels of OXYGEN TOLERANCE but it’s generally associated with cultivating strict anaerobes and microaerophiles. A microaerophile requires oxygen to survive, but environments containing lower levels of oxygen than the atmosphere.

So let’s go over what these results mean: 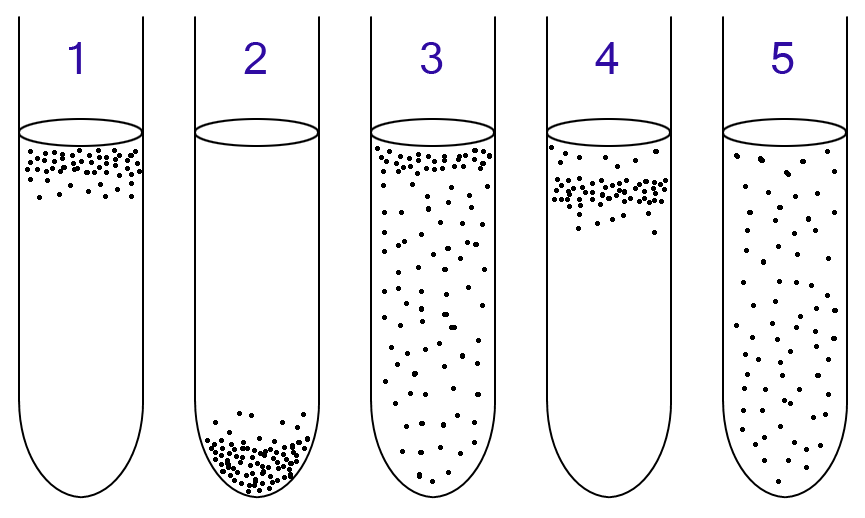 So it’s very easy, in a O-F tube, it starts as green, any yellowing indicates the breakdown of carbs and whether it has mineral oil or not determines under what conditions the bacteria can do it under.

This is a broth to which a carb such as lactose or sucrose is added and there is a durham tube that is used to indicate gas production.

The MR test is used to detect organisms capable of performing a mixed acid fermentation.

MR and VP are the same media to start with.

Used to determine if the organism has the ability to use citrate as its sole source of carbon. Part of the IMViC (Indole, Methyl Red, VP and Citrate) tests to differentiate members of Enterobacteriacea and other gram-negative rods.

Just like the citrate test, it’s used to differentiate organisms in the Enterobacteriaceae family.

Organisms that produce phenylalanine deaminase can remove the amine group (NH2) from the amino acid phenylalanine.  The phenylalanine agar is used to differentiate the genera Morganella, Proteus and Providencia from other members of the Enterobacteriaceae.

The agar is normally yellow.  If the phenylalanine deaminase is present, then when phenylalanine is broken down, there will be phenylpyruvic acid present and when you add ferric chloride, it will turn green.

This test is used to determine the ability of a microbe to produce gelatinases.  If the gelatin turns to liquid, gelatinase is present.

You have to know how to read slants and butts.  You typically read the slant first, then the butt.

Summary of what we know about E. coli

I don't know about you but nothing gets me fired up more than working on my abs. It's a unique muscle group that is utilized in every exercise and making it … END_OF_DOCUMENT_TOKEN_TO_BE_REPLACED

In this day and age most people are working from home and struggling to find the balance between stagnation and moving to stay fit. This program was developed … END_OF_DOCUMENT_TOKEN_TO_BE_REPLACED

I have three premium flexibility programs that I offer and many of you have been clamoring for a bundle-package, so here it is! You could now buy the … END_OF_DOCUMENT_TOKEN_TO_BE_REPLACED

This training routine is focused largely on increasing strength and muscle mass (aka muscular hypertrophy). If I had to sum up the routine in one fell swoop I … END_OF_DOCUMENT_TOKEN_TO_BE_REPLACED

I've created this hip flexibility program for those that would like to improve their flexibility in an efficient manner, with a follow along video that only … END_OF_DOCUMENT_TOKEN_TO_BE_REPLACED

This is for anybody who wants to get strong and have fun with a gymnastics-inspired routine. It is highly bodyweight-exercise oriented (no external weights) and … END_OF_DOCUMENT_TOKEN_TO_BE_REPLACED

For anyone who wants better shoulder health, shoulder flexibility, a looser upper back and improved posture, this program takes all the guess work out of it to … END_OF_DOCUMENT_TOKEN_TO_BE_REPLACED

Looking for a simple and straightforward bodyweight-oriented strength training routine that doesn't take too much time? You're not the only one! A survey I … END_OF_DOCUMENT_TOKEN_TO_BE_REPLACED