There’s pork insulin which is almost nonexistent at this point. Pork insulin differs from human insulin by only two amino acids.

Reactions: Lipodystrophy can develop, which is a fat bump under the skin that occurs from constantly injecting from the same place.  To prevent this you must rotate the injection sites.

U-100: When we administer insulin, we administer it in units. Insulins can come in a variety of unit concentrations but most of them are U-100 insulin. That means 100 units per milliliter. If you look at an insulin syringe, it has number markings on it. Those numbers indicate the units.  1 unit is a tenth of a cc. (1 unit = 0.01cc)

U-500: There’s another type of insulin you may see a couple times a year in your patients which is a U-500 insulin. That’s 500 units per ml. These patients have a severe form of diabetes that requires more than 100 units of injection. If the patient needs 150 units of insulin, you don’t want to use two injections, so you would use U-500 insulin, which is five times more concentrated and can fit into one syringe.

When a pharmacy sends a U500 vial to the nursing floor and it goes in the refrigerator, they put fluorescent stickers all over this vial to warn you that this is U500 insulin. If you draw up 30 units for a patient and it’s accidentally U500 instead of U100, that’s 150 units of insulin and they can become hypoglycemic and die.

Ultra-short acting insulin: Lispro (Humalog) works in a matter of minutes and just for an hour or two.

Long acting insulin: Works for 30 hours and some examples are Ultra-lente and Glargine (Lantus)

Intravenous: Regular insulin is the only insulin you could give intravenously. All the rest are subcutaneous. You could use this to treat ketoacidosis with an insulin drip. This is also useful during parenteral nutrition where they get their calories (protein, fat, electrolytes, trace elements) through a central line. Many patients can’t handle 35% dextrose and their blood sugar gets too high so they will also have insulin in this bag.

You’ll find orders written in a hospital setting that say:

Caution for glucose meters: These are not as accurate as hospital laboratories. These don’t work as well when the blood sugar is VERY low or VERY high and you can’t trust the results.

Onset is 2 hours. It peaks around 12 hours in and duration is 24 hours long. So they get a shot every 12 hours.

Onset is 3 hours and duration is 30 hours.

We give this at night since it takes time to kick in so that it’s working when it’s breakfast time.

All these insulin’s look similar 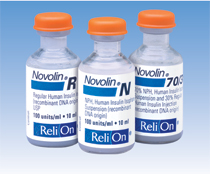 This is a huge problem. There’s two manufacturers of insulins: Elly Lilly and Novonortis. The Novolin R (Regular), Novolin N (NPH), and Novolin 70/30 all look similar so that is why we must be very careful and legally always needs two nurses to verify the medication.

The 70/30 is very unique as it’s 70% NPH and 30% Regular. The manufacturer saturated the protein such that 70% is bound up but it cannot bind up the remaining 30%.  For patients who can use this fixed ratio, the advantage is that they don’t have to draw up two vials of insulin.

Every patient is different. When a patient gets into a hospital, that means they’re sick and there’s physical stress on their body which means there’s probably an excess release of corticosteroids, causing a high blood sugar level.  The nurses deal with that either by a fixed number of units of insulin or a sliding scale.

If a patient has a severe infection, it takes about 3 days for their infection to go down. During this time the blood sugar level will be higher than normal and the insulin given must be varied to accommodate this.  As the infection gets better, the stress goes down on their body. As the stress goes down, their insulin use must be decreased as well.

This training routine is focused largely on increasing strength and muscle mass (aka muscular hypertrophy). If I had to sum up the routine in one fell swoop I … END_OF_DOCUMENT_TOKEN_TO_BE_REPLACED

I have three premium flexibility programs that I offer and many of you have been clamoring for a bundle-package, so here it is! You could now buy the … END_OF_DOCUMENT_TOKEN_TO_BE_REPLACED

I don't know about you but nothing gets me fired up more than working on my abs. It's a unique muscle group that is utilized in every exercise and making it … END_OF_DOCUMENT_TOKEN_TO_BE_REPLACED

Looking for a simple and straightforward bodyweight-oriented strength training routine that doesn't take too much time? You're not the only one! A survey I … END_OF_DOCUMENT_TOKEN_TO_BE_REPLACED

This is for anybody who wants to get strong and have fun with a gymnastics-inspired routine. It is highly bodyweight-exercise oriented (no external weights) and … END_OF_DOCUMENT_TOKEN_TO_BE_REPLACED

In this day and age most people are working from home and struggling to find the balance between stagnation and moving to stay fit. This program was developed … END_OF_DOCUMENT_TOKEN_TO_BE_REPLACED

For those who have poor flexibility, tight hamstrings and want a simple program that will help them to get looser in a gentle, non-painful manner. In this … END_OF_DOCUMENT_TOKEN_TO_BE_REPLACED

For anyone who wants better shoulder health, shoulder flexibility, a looser upper back and improved posture, this program takes all the guess work out of it to … END_OF_DOCUMENT_TOKEN_TO_BE_REPLACED