Follicle Stimulating Hormone (FSH) and Luteinizing Hormone (LH).  Both these hormones affect the reproductive organs of both the female and the male. They are named for what they do for the ovaries of a female, although they do affect the testes of the male as well. We’ll deal with guys first, then the more complicated women.

FSH and LH in men

By age 13, the pituitary gland starts producing FSH and LH in guys, to promote sperm and testosterone and this process continues until the day you die. Sperm levels and testosterone levels go down with time but a 95 year old can still father a child and will try if given the chance.

Do sperm go into the blood stream and feedback to the adenohypophysis?

No. Sperm are ejaculated out of the penis. There is a theoretical chemical that should be providing a negative feedback loop for this to work but physiologists aren’t sure of what it is or how it works. We don’t have a male birth control pill because we aren’t sure how this feedback system works. If we give a guy testosterone everyday, that primarily inhibits the release of LH which means their own testes won’t produce testosterone, but it wont stop the production of FSH that produces sperm. We don’t have a way of stopping the production of sperm. That’s why there’s no male birth control. Body builders could still cause pregnancy. Twenty years ago it might have been a political statement to say that a male birth control pill doesn’t exist because all the physicians are males but that’s not true anymore with the majority of doctors being female.  If a male birth control existed, men would take it.

FSH and LH in women

I highly urge you to review the physiology of the menstrual cycle because it’s important enough to go over again. For women of menstruating age, it’s about the most important system as anything else in the body. Anyway, these hormones work completely differently in women. In women, FSH is released for 2 weeks, LH for 2 weeks. Remember in guys, it releases both at the same time. We also know that at about the age of 50, the menstrual cycle stops in women, this is known as menopause, but menopause is not caused by the pituitary not releasing LH or FSH, in fact a woman releases LH or FSH for their entire life but the ovaries stop responding! The common expression is, “I guess my ovaries are burned out.”  Postmenopausal woman have VERY high levels of LH and FSH because they don’t have the negative feedback loop of the ovaries. 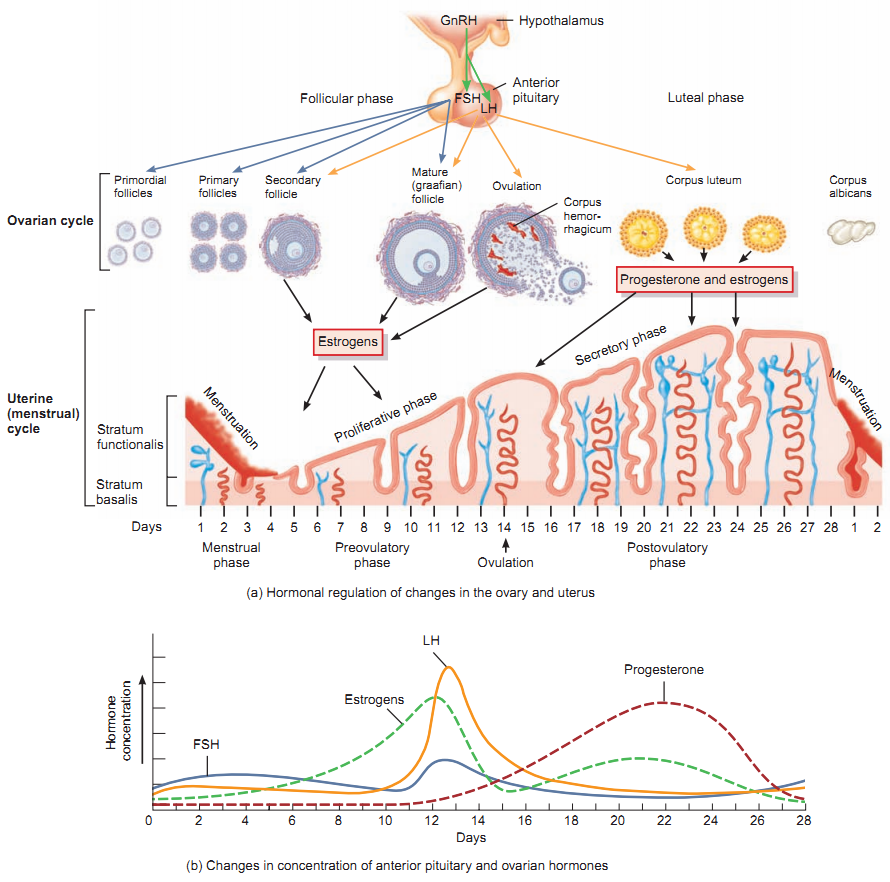 The following is a very quick review of the menstrual cycle and how this ties into what we are learning:

During the ages of 12-50, the pituitary releases FSH and LH cyclically. FSH stimulates the growth of the ovarian follicle in the ovaries, and also the follicle cells around it to release estrogen.  Estrogen is a feminizing hormone that affects the woman’s body, skin, breasts, bone and causes a slight thickening of endometrial lining. This first 2 weeks is known as the preovulatory phase (or the follicular phase). Around day 14, after the first 2 weeks, the adenohypophysis starts secreting increasingly-higher amounts of LH and that causes an egg to pop out. Once an egg pops out into the fallopian tube, now a woman could get pregnant and the egg can live only 3-5 days so there’s only a window of 3-5 days where a woman could get pregnant during the cycle. LH is going to be released for 2 weeks, so then we call the ovarian follicle, a corpus luteum, and the ovarian follicles secrete estrogen and progesterone which causes a very strong thickening of the endometrial lining. This is called the luteal (postovulatory phase) because of the release of LH.  About day 28, LH is going to stop being released. The drop in the LH level causes the corpus luteum to degenerate and this drop leads to the shedding of the endometrial lining. It was the increase of progesterone that caused the thickening and now the drop in its level causes the shedding out the birth canal. The first day a woman notices this, is considered the first day of menstruation and the cycle starts all over again.

If the woman HAD gotten pregnant, the chorionic villi surrounding the embryo will secrete HCG, which mimics LH and stimulates the corpus luteum to keep secreting progesterone so that the hormones from the pituitary are no longer controlling the woman but the baby is.

As estrogen hormone levels rise, that inhibits the release of FSH, because that’s what normally causes the secretion of estrogen.

An increase of progesterone inhibits the release of LH, because that’s what normally causes progesterone to be secreted.

Now the next most logical step would be to go over how birth control works!

Do you have questions in regards to your training, diet or habits in general? I bet you do because I get messages every single day from people looking for … END_OF_DOCUMENT_TOKEN_TO_BE_REPLACED

Looking for a simple and straightforward bodyweight-oriented strength training routine that doesn't take too much time? You're not the only one! A survey I … END_OF_DOCUMENT_TOKEN_TO_BE_REPLACED

In this day and age most people are working from home and struggling to find the balance between stagnation and moving to stay fit. This program was developed … END_OF_DOCUMENT_TOKEN_TO_BE_REPLACED

I have three premium flexibility programs that I offer and many of you have been clamoring for a bundle-package, so here it is! You could now buy the … END_OF_DOCUMENT_TOKEN_TO_BE_REPLACED

For anyone who wants better shoulder health, shoulder flexibility, a looser upper back and improved posture, this program takes all the guess work out of it to … END_OF_DOCUMENT_TOKEN_TO_BE_REPLACED

I don't know about you but nothing gets me fired up more than working on my abs. It's a unique muscle group that is utilized in every exercise and making it … END_OF_DOCUMENT_TOKEN_TO_BE_REPLACED

I've created this hip flexibility program for those that would like to improve their flexibility in an efficient manner, with a follow along video that only … END_OF_DOCUMENT_TOKEN_TO_BE_REPLACED

For those who have poor flexibility, tight hamstrings and want a simple program that will help them to get looser in a gentle, non-painful manner. In this … END_OF_DOCUMENT_TOKEN_TO_BE_REPLACED