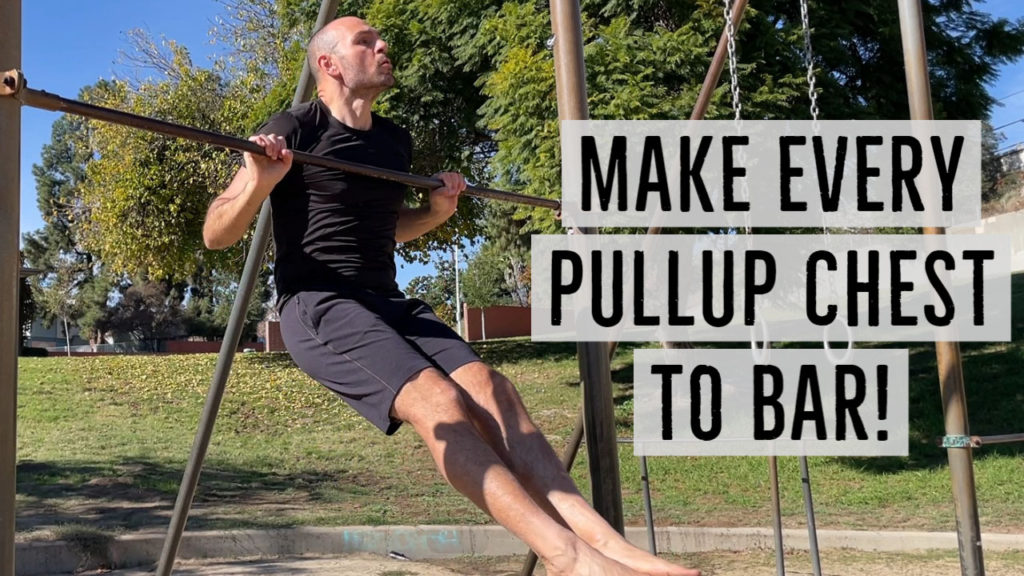 Question: “I would like your advice on how I can start pulling higher and get more explosive.  Just trying to get higher each workout has not yielded any more results.  I want to be able to pull-up to lower sternum area so that I can do muscle-ups, but I have not been able to progress to that level.”

Answer: “Less reps/set but with better quality reps and more sets. That is, stop the set when you stop hitting your upper chest. If that means you only get 3 reps, so be it. Rest until you can do 3 more good reps. Do a ton of sets like this. After a while you should be able to pull higher – maybe mid-sternum. Make your definition of “good rep” mean “to mid-sternum” now and stop the set when you can’t hit your goal. Repeat this process until muscle-up.”

Gabo Saturno and Adam of Gymnastics Strength made a video together sharing 4 reasons why you can’t do pullups where you pull high enough for your chest to reach the bar. This was a decent video but there were a couple things they didn’t mention which I think are even more important. So first I’m going to tell you what their suggestions were, what I think of them and then tell you my personal recommendations.

The ring rows and band assisted pullups are good, sensible suggestions. The other two are whatever. But let’s say you are strong enough and you already do ring rows. There’s a couple aspects which are even more important they missed and that is tempo, scapular pulls and grip position.

The first time you get your chest to bar pullup, it’s going to be because you’re pulling faster than usual to  help you get there.

You want to train your ability to pull FAST. That is a skill in itself. If you always do an exercise slowly, you actually train yourself to only being able to do it slowly and the explosive performance degrades. You want to make everything ideally explosive on the concentric (contraction) phase. You generate more power that way and build more strength. It’s not cheating. It’s actually the proper way. Doing things purposely slowly is good when you’re still getting to know an exercise and want to do it correctly, but if you have the technique down, you need to do everything faster.

Pulling up and slowly down… it’s not ideal. So if you are used to doing pull-ups slowly, you need to fix that. After a few sessions, you’ll already notice you’re able to pull much faster and higher.

2. Train the skill itself by practicing it when you’re fresh and limiting yourself to 1-3 reps per set but doing far more sets.

Instead of doing 3 sets of 8 pull-ups, focus on 5-8sets of 1-3 reps, ALL done with the purpose of doing it explosively (resting as much as necessary to maintain good performance, and don’t be shy about only doing only 1 rep).

For most exercises we do 3×8 reps (band exercises with a 2sec hold, rows), and you should. But for this purpose, you also want to start doing far fewer reps per set, doing only 1,2,3 reps with the purpose of pulling as fast as possible with good form and holding it for 1-2 seconds.  Stop the set when you start losing range.

3. Make sure you’re pulling the shoulders down away from the ears.

The other thing they didn’t really focus too much on is the scapular pull aspect. I’ve said this in other videos of how important it is to pull the shoulders down, away from the ears before you start bending the elbows. That’s known as a scapular pullup. This is one of the biggest reasons why someone can barely get their chin over the bar. It’s because they’re not de-shrugging their shoulders down at the start of a pullup.

4. Experiment with the grip position. Overgrip purposely by bringing the pinky-side of your hand over the bar more.

You will naturally put your shoulders in an active dead hang (scapular pull) if you put your pinky and ring fingers more aggressively over the bar. And another thing that might help is putting your thumb over the bar instead of under but this is a minor thing and varies from person to person.

So to recap, pull explosively, train that as a skill, doing many very few reps spread over many sets when you’re fresh and strong. Make sure you’re doing a scapular pull at the start of each rep. Overgrip on purpose and you’ll be well on your way to pulling higher than ever before. Hope that helps!

I've created this hip flexibility program for those that would like to improve their flexibility in an efficient manner, with a follow along video that only … END_OF_DOCUMENT_TOKEN_TO_BE_REPLACED

This training routine is focused largely on increasing strength and muscle mass (aka muscular hypertrophy). If I had to sum up the routine in one fell swoop I … END_OF_DOCUMENT_TOKEN_TO_BE_REPLACED

For those who have poor flexibility, tight hamstrings and want a simple program that will help them to get looser in a gentle, non-painful manner. In this … END_OF_DOCUMENT_TOKEN_TO_BE_REPLACED

Looking for a simple and straightforward bodyweight-oriented strength training routine that doesn't take too much time? You're not the only one! A survey I … END_OF_DOCUMENT_TOKEN_TO_BE_REPLACED

For anyone who wants better shoulder health, shoulder flexibility, a looser upper back and improved posture, this program takes all the guess work out of it to … END_OF_DOCUMENT_TOKEN_TO_BE_REPLACED

I don't know about you but nothing gets me fired up more than working on my abs. It's a unique muscle group that is utilized in every exercise and making it … END_OF_DOCUMENT_TOKEN_TO_BE_REPLACED

This is for anybody who wants to get strong and have fun with a gymnastics-inspired routine. It is highly bodyweight-exercise oriented (no external weights) and … END_OF_DOCUMENT_TOKEN_TO_BE_REPLACED

In this day and age most people are working from home and struggling to find the balance between stagnation and moving to stay fit. This program was developed … END_OF_DOCUMENT_TOKEN_TO_BE_REPLACED