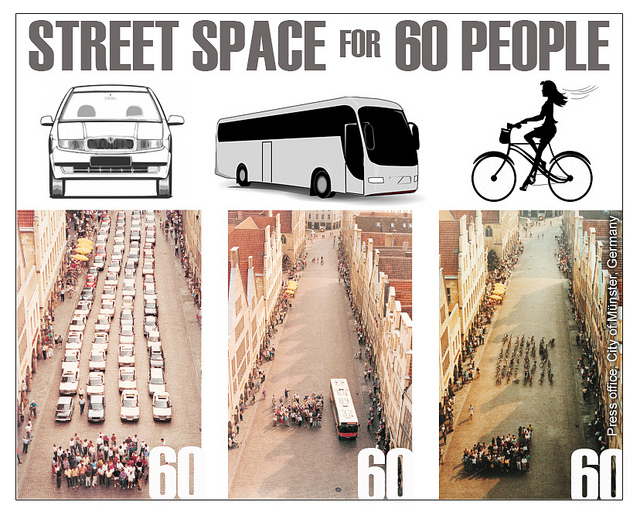 While waiting for the bus this morning, I was watching all the cars zooming by and I realized almost everyone, no matter if they were in a coupe, sedan, truck or SUV, had just one person in it.  I thought wow, first of all, a modern midsize car weighs a minimum of 3,000 pounds.  All these people are driving a 3,000 pound machine, to transport their 200 pound selves.  So much wasted energy, but it gives you insight as to how powerful gasoline really is, right?  Contrast that with a bicycle, which is just a 25 pound vehicle, propelled by the same person, but instead of gasoline and an engine, it’s powered by food and legs.

So I decided to start counting how many cars were actually occupied by just one person, to make sure it wasn’t simply my imagination that most of the cars looked like they had no passengers.

I counted the cars coming toward me for about 10 minutes.  The Results?

So it wasn’t my mind playing tricks on me.  Playing with these 8am morning rush hour numbers, that means I witnessed 93% of the vehicles had just a driver. About 6% had a passenger.  And the remaining 1% were a motorcycle and bicycle.

So why don’t we carpool more often?

1. Now, of course, it’s understandable why so many people drive and don’t carpool.  Everyone wants independence to go and do anything they want at any time.  It’s that glorious freedom that gets deeply rooted in us when we get a license and our first car.

2. There is no easy way to carpool.  I’m sure there are web sites around, but I haven’t used them and neither have you probably. If you have personal experience to share, please comment below!

3. Being antisocial is totally acceptable in the city, and downright encouraged.  From a young age, fear is irrationally injected into us about avoiding strangers. As if you aren’t a stranger to others yourself.  Oh and, hitch hikers are all murderers for sure.

So what have I done about it?

Well I haven’t been carpooling, that’s for sure.  However, years ago I started cycling and it only took a few rides until I realized I could sometimes commute with my bicycle.  There’s something really beautiful about experiencing the city at 12mph.  Leaving the car at home felt extremely liberating and still does to this day.  Which is really strange because you would think the car is the ultimate in liberation, but it’s not.  (You have a huge responsibility with a car!)

For the past couple years or so I’ve been mixing bicycling with public transport, which is great if I don’t feel like bicycling a lot.  I could be tired from the previous day or it might be raining or who knows what.

Oddly enough, I never tried taking ONLY public transport (with no bicycle) until just a few months ago.  What was really strange was that just being on foot with a light backpack and a bus pass felt even more liberating than just going around with a bicycle!  I just feel even more care-free when I don’t have to deal with a bicycle at all, let alone a car!

I don't know about you but nothing gets me fired up more than working on my abs. It's a unique muscle group that is utilized in every exercise and making it … END_OF_DOCUMENT_TOKEN_TO_BE_REPLACED

For anyone who wants better shoulder health, shoulder flexibility, a looser upper back and improved posture, this program takes all the guess work out of it to … END_OF_DOCUMENT_TOKEN_TO_BE_REPLACED

This is for anybody who wants to get strong and have fun with a gymnastics-inspired routine. It is highly bodyweight-exercise oriented (no external weights) and … END_OF_DOCUMENT_TOKEN_TO_BE_REPLACED

Looking for a simple and straightforward bodyweight-oriented strength training routine that doesn't take too much time? You're not the only one! A survey I … END_OF_DOCUMENT_TOKEN_TO_BE_REPLACED

I have three premium flexibility programs that I offer and many of you have been clamoring for a bundle-package, so here it is! You could now buy the … END_OF_DOCUMENT_TOKEN_TO_BE_REPLACED

This training routine is focused largely on increasing strength and muscle mass (aka muscular hypertrophy). If I had to sum up the routine in one fell swoop I … END_OF_DOCUMENT_TOKEN_TO_BE_REPLACED

For those who have poor flexibility, tight hamstrings and want a simple program that will help them to get looser in a gentle, non-painful manner. In this … END_OF_DOCUMENT_TOKEN_TO_BE_REPLACED

I've created this hip flexibility program for those that would like to improve their flexibility in an efficient manner, with a follow along video that only … END_OF_DOCUMENT_TOKEN_TO_BE_REPLACED