We are going to talk about the homeostatic reflex mentioned as the following things in a textbook:

We begin with the kidney. The kidney is an endocrine gland (since it secretes several hormones) and it excretes two hormones we are going to learn about: renin (renal means kidney) and erythropoietin (brand name Procrit). The cells that secrete renin are called Juxtaglomerular (J-G) cells.

Three triggers that cause JG cells to secrete Renin into the blood stream:

The RAA pathway ensures that it will correct for all three of these triggers.  It makes this a very important reflex because it controls your blood pressure and your two most important minerals in your body: sodium and potassium.

When Renin is secreted, it stimulates a protein in your blood stream called angiotensinogen.  The liver makes most of these plasma proteins (such as albumin).  This angiotensinogen is always circulating in the blood stream.  Renin activates it and turns it into angiotensin-1.

(There are many proteins that have to be “activated.”  The inactivated form usually it ends with -gen.  Then when it’s activated, you drop that ending so it becomes angiotensinogen to angiotensin 1.  For example: Your stomach cells secrete something called pepsinogen and the hydrochloric acid activates it into pepsin.  During blood clotting, Fibrinogen is turned into fibrin.)

How does Renin activate Angiotensin? 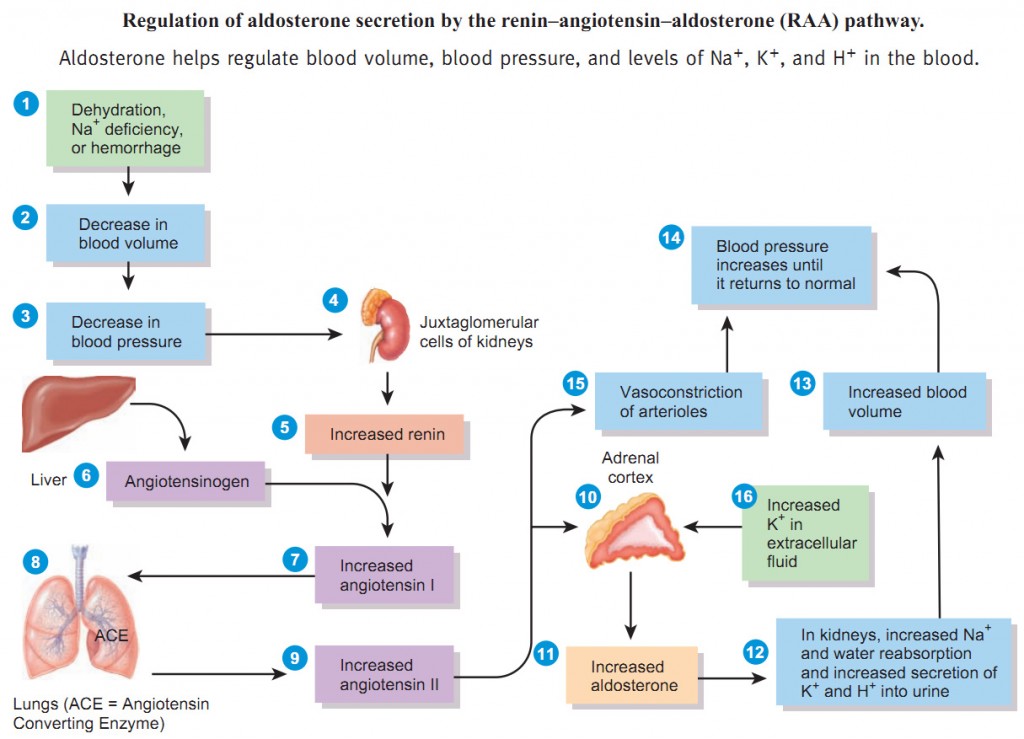 Angiotensinogen is a polypeptide.  Renin cleaves four of the last amino acids in the molecule, and changes it to Angiotensin I, so to say it got activated, was to mean it got shorter.

There’s an enzyme in your lungs called ACE which stands for Angiotensin Converting Enzyme and as Angiotensin-1 is carried to your blood stream to your lungs, it becomes Angiotensin-2.    ACE basically cleaves off the last 2 amino acids of Angiotensin-I, making it an even shorter polypeptide chain and that is Angiotensin-2 now.  So it’s been cleaved/spliced twice so far.

This aldosterone that is released from the adrenal cortex (due to the angiotensin-2) will affect the kidneys.

Aldosterone will make the kidneys do three things:

The Aldosterone will raise the BP, raise Na+, decrease K+ because it causes the kidney to retain salt and water. People always confuse this with Anti-Diuretic Hormone (ADH), so make sure you don’t. 🙂

What’s the difference between ADH and Aldosterone?

If you eat food that’s high in salts, you increase the tonicity of your bloodstream when it’s absorbed and become hypertonic. That triggers ADH which causes your kidneys to retain water and only water.  A drop in blood pressure will also cause ADH release because there’s a multiplicity to the body all the time.

There’s never been a clinical case of somebody overproducing ADH.  But there are clinical cases of lower than normal ADH levels (deficiency) which goes by the name of diabetes insipidus.  What’s diabetes insipidus?  If you can’t make ADH, you pee a lot because you have no way of not-peeing a lot.  The word diabetes means to pee a lot.  There’s diabetes mellitus.  Mellitus means sweet.  So this is sweet pee.  Insipidus is pee that doesn’t taste sweet.  These two diabetes were recognized by ancient greeks.  When people would pee a lot, they would taste their urine.  If it tastes sweet, it was called diabetes mellitus, and if it wasn’t sweet it was called diabetes insipidus.

With diabetes mellitus, you don’t have enough insulin so it leads to hyperglycemia which spills into the urine (glycosuria, tested by dipstick), and it osmotically draws water (osmotic diuresis) with it, so people with diabetes pee a lot. Review ketoacidosis in unmanaged diabetes section.

Here’s a chart below to help you note the differences.

On the right is aldosterone which increases both salt and water retention and increases potassium secretion… it regulates your Na+K+ and blood volume.

Hyperaldosteronism:  At the lower right, we talk about too much aldosterone. It causes a rise in the blood pressure, called renal hypertension because you’re retaining salt and water which leads to hypervolemia, hypernaremia and hypokalemia.  This is a problem but not fatal.

Hypoaldosteronism: A deficiency in aldosterone is fatal because you don’t retain salt or water and don’t excrete potassium which leads to hyponatremia, hypovalemia and hyperkalemia which leads to depolarization of all the cells in the body, which causes increased activity of your muscle cells and what kills you is eventually the fibrillation of the heart.  By retaining less volume and salt, your blood volume drops and your blood pressure drops and this is circulatory shock.

Since we mentioned renal hypertension as a cause of hyperaldosteronism, let’s go over hypertension.

Do you have questions in regards to your training, diet or habits in general? I bet you do because I get messages every single day from people looking for … END_OF_DOCUMENT_TOKEN_TO_BE_REPLACED

Looking for a simple and straightforward bodyweight-oriented strength training routine that doesn't take too much time? You're not the only one! A survey I … END_OF_DOCUMENT_TOKEN_TO_BE_REPLACED

In this day and age most people are working from home and struggling to find the balance between stagnation and moving to stay fit. This program was developed … END_OF_DOCUMENT_TOKEN_TO_BE_REPLACED

I have three premium flexibility programs that I offer and many of you have been clamoring for a bundle-package, so here it is! You could now buy the … END_OF_DOCUMENT_TOKEN_TO_BE_REPLACED

For anyone who wants better shoulder health, shoulder flexibility, a looser upper back and improved posture, this program takes all the guess work out of it to … END_OF_DOCUMENT_TOKEN_TO_BE_REPLACED

I don't know about you but nothing gets me fired up more than working on my abs. It's a unique muscle group that is utilized in every exercise and making it … END_OF_DOCUMENT_TOKEN_TO_BE_REPLACED

I've created this hip flexibility program for those that would like to improve their flexibility in an efficient manner, with a follow along video that only … END_OF_DOCUMENT_TOKEN_TO_BE_REPLACED

For those who have poor flexibility, tight hamstrings and want a simple program that will help them to get looser in a gentle, non-painful manner. In this … END_OF_DOCUMENT_TOKEN_TO_BE_REPLACED