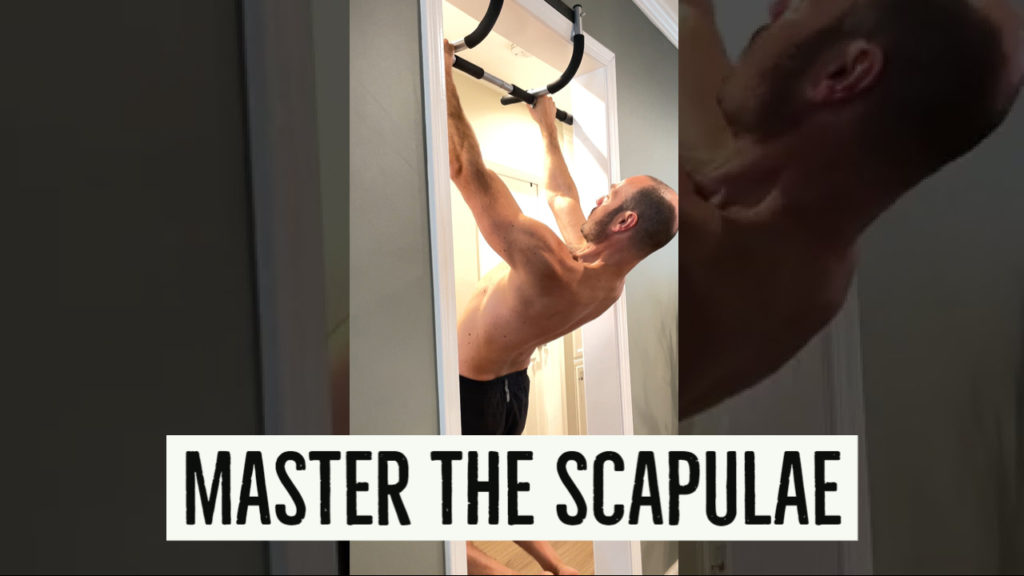 It’s kinesiology hour applied to calisthenics! There’s a bit of info that’s constant regurgitated incorrectly all over YouTube and various forums in regards to instruction on a simple shoulder movement that I want to clear up. By the end of this post, you will have a better understanding of the actions of the shoulder and shoulder blades.

So first, a little review of all the ways the shoulders and shoulder blades (scapulae) can move:

Here’s a visual representation of the above actions

Now here’s the bit that needs a wee bit of clarification:

Basic scapular pulls and arching scapular pulls are exercises that provide a solid foundation for all pulling-exercises (such as pullups and front levers). They are often used as a warm-up as well.

Video of those Basic Scapular Pulls (Elevation paired with Depression+Retraction):

An arching scapular pull (aka arching active hang) adds another layer of action: Instead of just performing shoulder elevation and depression/retraction, you also perform shoulder extension. Shoulder extension is when you pull your arms down to lift your torso up.

I cannot tell you the number of times I’ve heard people say that an arching scapular pullup is a basic scapular pull but with the addition of retraction. No! It is the wrong cue and all it does is reveal a hole in your understanding of how the body works.

How trainers who don’t understand basic kinesiology explain it like this:

What it actually is:

If someone was not formally trained with anatomy, I understand how they could mess this up, but what’s happened over the years is people regurgitate/parrot whatever was said in older videos/posts without knowing they’re wrong.

If you pull the shoulders down away from the ears, you are naturally going to be depressing and retracting because when you bring the shoulders down, the shoulder blades will be coming together as well (retraction). If you want to arch the back by raising the torso up toward horizontal, you do so by pulling the hands down to perform shoulder extension as it’s called. That is how one performs that movement. It takes a ton of strength to pull off meaningful range, and it takes time for it to improve but it can be done with practice. This “shoulder extension” (driving the elbows/arms down) is exactly what you do in a front lever with straight arms. It is also exactly what you do in a pullup but with bent arms.

Anyway, did you ever think you’d read 800 words on this topic? Neither did I! But hopefully you understand shoulder mechanics a bit better now as a result! Did you enjoy this post? Would you like me to delve into anatomy/kinesiology more? If you have any questions, please let me know!

In this day and age most people are working from home and struggling to find the balance between stagnation and moving to stay fit. This program was developed … END_OF_DOCUMENT_TOKEN_TO_BE_REPLACED

For anyone who wants better shoulder health, shoulder flexibility, a looser upper back and improved posture, this program takes all the guess work out of it to … END_OF_DOCUMENT_TOKEN_TO_BE_REPLACED

I have three premium flexibility programs that I offer and many of you have been clamoring for a bundle-package, so here it is! You could now buy the … END_OF_DOCUMENT_TOKEN_TO_BE_REPLACED

For those who have poor flexibility, tight hamstrings and want a simple program that will help them to get looser in a gentle, non-painful manner. In this … END_OF_DOCUMENT_TOKEN_TO_BE_REPLACED

This is for anybody who wants to get strong and have fun with a gymnastics-inspired routine. It is highly bodyweight-exercise oriented (no external weights) and … END_OF_DOCUMENT_TOKEN_TO_BE_REPLACED

Looking for a simple and straightforward bodyweight-oriented strength training routine that doesn't take too much time? You're not the only one! A survey I … END_OF_DOCUMENT_TOKEN_TO_BE_REPLACED

I don't know about you but nothing gets me fired up more than working on my abs. It's a unique muscle group that is utilized in every exercise and making it … END_OF_DOCUMENT_TOKEN_TO_BE_REPLACED

This training routine is focused largely on increasing strength and muscle mass (aka muscular hypertrophy). If I had to sum up the routine in one fell swoop I … END_OF_DOCUMENT_TOKEN_TO_BE_REPLACED