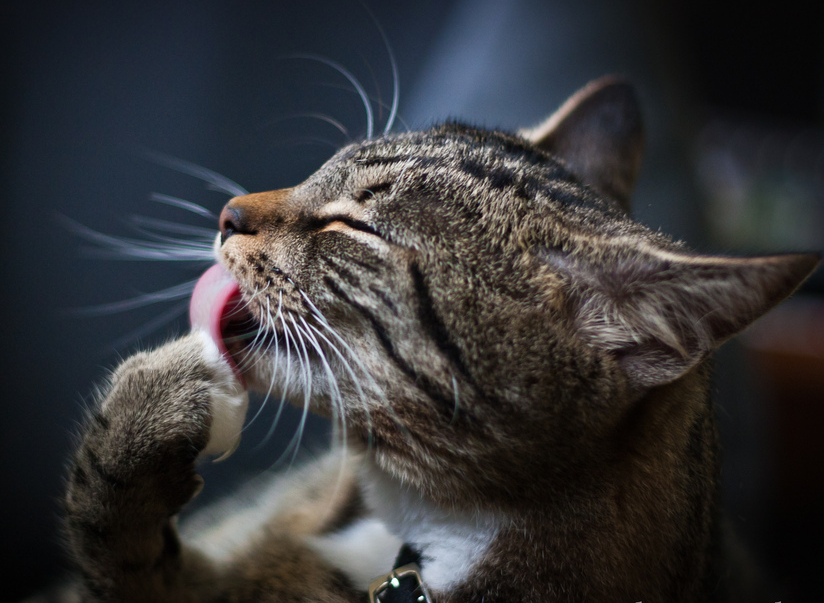 Sitting under the warmth of the sun oftentimes just feels great.  I’m sure you’ve heard that we get our vitamin D from doing this as well.  However, do you know exactly how the process works?

When it comes to furred mammals, they don’t get their vitamin D the same way we do, but you’ll find out how it’s done shortly!  First I’ll explain the importance of vitamin D, then mention how it’s formed for us humans, and then finally, how it relates to our furry friends.

What’s the importance of vitamin D3?

Vitamin D3 isn’t really a vitamin.  It’s actually more like a hormone.  The importance of it is that it helps regulate your mineral metabolism and subsequently maintains the calcium balance in your bones.  It is thought that this vitamin plays a role in affecting the expression of over 200 genes.

How do humans create vitamin D3?

The oil that naturally comes from our skin is a type of cholesterol.  Whenever we stand under direct sunlight, the ultraviolet rays react with this oil.  The ultraviolet radiation breaks some chemical bonds in the oil so that it forms a different molecule.  This molecule is known as the infamous Vitamin D3 which is why it’s also called the “sunshine vitamin.”

Once the cholesterol is converted to vitamin D3, it is then absorbed back into the skin and enters the blood stream.  You need about 10-15 minutes of full sunshine to get enough, but most people aren’t always able to do that, so it’s highly recommended you take a supplement.  This is especially important for fair-skinned people who just can’t hang out in the sun too long anyway because they will burn.

How do our furry friends get their vitamin D3?

Dogs and cats secrete the same oily cholesterol from their skin, just like us.  When they lay in the sun, that oil is, again, converted to Vitamin D3.  The difference, however, is that because they have so much hair, the vitamin ends up on their fur and doesn’t get absorbed through their skin.

When they lick their body, to groom or clean themselves, they ingest the vitamin D orally.  So maybe it’s a good thing that cats have OCD with cleaning themselves.  Oh and by the way, I mention cats and dogs, but this info applies to ALL furry mammals and also to birds. 🙂

This training routine is focused largely on increasing strength and muscle mass (aka muscular hypertrophy). If I had to sum up the routine in one fell swoop I … END_OF_DOCUMENT_TOKEN_TO_BE_REPLACED

For those who have poor flexibility, tight hamstrings and want a simple program that will help them to get looser in a gentle, non-painful manner. In this … END_OF_DOCUMENT_TOKEN_TO_BE_REPLACED

This is for anybody who wants to get strong and have fun with a gymnastics-inspired routine. It is highly bodyweight-exercise oriented (no external weights) and … END_OF_DOCUMENT_TOKEN_TO_BE_REPLACED

I don't know about you but nothing gets me fired up more than working on my abs. It's a unique muscle group that is utilized in every exercise and making it … END_OF_DOCUMENT_TOKEN_TO_BE_REPLACED

In this day and age most people are working from home and struggling to find the balance between stagnation and moving to stay fit. This program was developed … END_OF_DOCUMENT_TOKEN_TO_BE_REPLACED

For anyone who wants better shoulder health, shoulder flexibility, a looser upper back and improved posture, this program takes all the guess work out of it to … END_OF_DOCUMENT_TOKEN_TO_BE_REPLACED

I've created this hip flexibility program for those that would like to improve their flexibility in an efficient manner, with a follow along video that only … END_OF_DOCUMENT_TOKEN_TO_BE_REPLACED

I have three premium flexibility programs that I offer and many of you have been clamoring for a bundle-package, so here it is! You could now buy the … END_OF_DOCUMENT_TOKEN_TO_BE_REPLACED