Lets get something straight.  Car engines DON’T benefit at all from being warmed up before driving.  You’re actually hurting your engine and polluting the environment the most by letting your cold engine idle.

The best thing to do is to turn the engine on, wait about 10-30 seconds (put your seat belt and music on) and start driving it lightly.  That way you are warming up the engine to it’s optimal temperature as fast as possible. 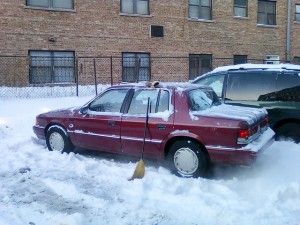 What about during winter when it’s freezing and there’s snow?

If you have to drive in the morning, and it’s freezing, you surely might have this habit of  getting in your ice cube of a car, turning it on, and clearing all the snow off until the car is warmed up.  That way you can also get the heater going as well.  Some people even have remote-starters where they start the engine while they are still in their homes, so the car will be warmed up once they get in the car.  This is a terrible habit because your engine struggles to warm up in sub freezing temperatures, and until it does, it may take up to 15 minutes and all the while it is experiencing extreme wear and tear.

So what you do is turn your car on, wait about a minute, and then start driving it lightly.  It doesn’t need to idle for 10 minutes!

Most of the pollution put out by a car occurs when it is not sufficiently warmed up.

Every car comes equipped with something called a catalytic converter that reduces the pollution coming out of your tailpipe by 90%.

Here’s the kicker though: this device doesn’t work properly until it has been sufficiently heated.  That is why if you walk past a car that just turned on and is idling in the driveway, the fumes may be overwhelmingly bad!  Many cars nowadays are programmed to idle higher than normal for the first few minutes so that the the engine AND catalytic converter will warm up faster! So again, the faster you warm up your car by driving your car lightly, the better.

Emissions of the Past…

Every car in the US since 1976 has to have a cat installed.  This is why if you’re stuck behind a very old car you can smell and probably even SEE the soot coming out the tailpipe. 😐

Can you imagine what the air would be like if millions of cars in LA didn’t have this device?  I’ve heard from several older people that the smog used to be SO bad in the 70’s in LA that if you lived in Pasadena, you couldn’t see your own mountains because the haze was so thick.  And Pasadena, is right by the foothills.  Thankfully the air quality of California has been getting better for the past several decades despite the intense growth of the city.

The Future… is NOW! (well, in Europe anyway) 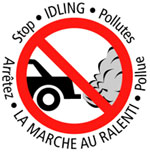 European governments are much more proactive in laying down laws that protect the environment.  They have gone so far as to make idling illegal when you are parked anywhere from a few seconds to a minute, depending on the country you’re in.  The reason for this is very simply because it is wasteful and there is no reason why you should be polluting the air more than necessary.

In 2012, millions of cars in Europe will have idle-stop technology built in that automatically turns the engine off when you come to a stop.  And when you need to get going again, the engine will turn back on when you either let go of the brake, put the clutch in, or shift into gear. These laws exist not only because it helps extend the life of your car, but because it is just an environmentally conscious thing to do.

Anyway, I hope that helps!  And share this info regarding warming up your car with your friends and family!  Also, don’t blame me if your father yells at you for trying to change his ways. 🙂

I've created this hip flexibility program for those that would like to improve their flexibility in an efficient manner, with a follow along video that only … END_OF_DOCUMENT_TOKEN_TO_BE_REPLACED

For anyone who wants better shoulder health, shoulder flexibility, a looser upper back and improved posture, this program takes all the guess work out of it to … END_OF_DOCUMENT_TOKEN_TO_BE_REPLACED

I don't know about you but nothing gets me fired up more than working on my abs. It's a unique muscle group that is utilized in every exercise and making it … END_OF_DOCUMENT_TOKEN_TO_BE_REPLACED

In this day and age most people are working from home and struggling to find the balance between stagnation and moving to stay fit. This program was developed … END_OF_DOCUMENT_TOKEN_TO_BE_REPLACED

This is for anybody who wants to get strong and have fun with a gymnastics-inspired routine. It is highly bodyweight-exercise oriented (no external weights) and … END_OF_DOCUMENT_TOKEN_TO_BE_REPLACED

For those who have poor flexibility, tight hamstrings and want a simple program that will help them to get looser in a gentle, non-painful manner. In this … END_OF_DOCUMENT_TOKEN_TO_BE_REPLACED

I have three premium flexibility programs that I offer and many of you have been clamoring for a bundle-package, so here it is! You could now buy the … END_OF_DOCUMENT_TOKEN_TO_BE_REPLACED

This training routine is focused largely on increasing strength and muscle mass (aka muscular hypertrophy). If I had to sum up the routine in one fell swoop I … END_OF_DOCUMENT_TOKEN_TO_BE_REPLACED