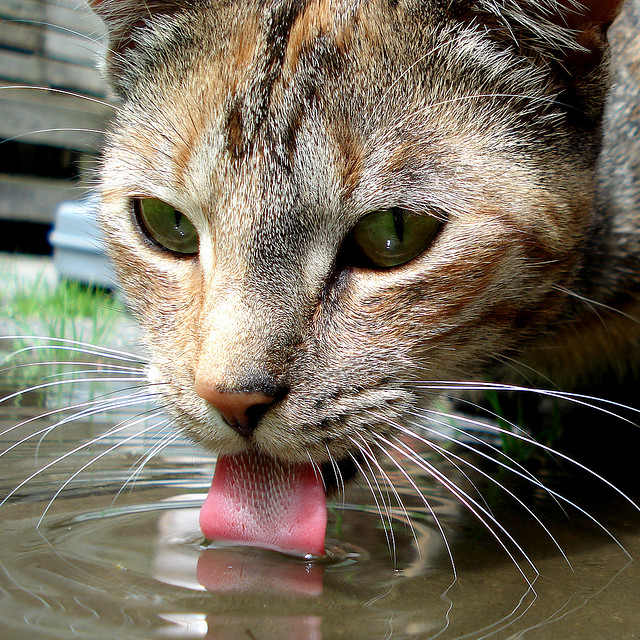 Let’s imagine a thirsty dog or cat walking up to the water bowl.  You could imagine them hurriedly lapping up the water, using the tongue like a ladle, trying to scoop water into its mouth, right?  Well, research in the past couple years has revealed that this isn’t exactly how these beautiful animals get water in their mouths!

Let’s start with cats specifically… How do cats drink water?

Cats lap water so fast that the naked eye can’t follow it fast enough to notice.  It wasn’t until 2010 when researchers, using high speed photography, discovered the reality and were able to shed new light on the process.

When a cat is going to drink water, it will stick its tongue out, curl the tip of its tongue backward, not forward.  This curled tip will touch the liquid, barely penetrating the surface, then retract its tongue back into its mouth very, very fast.  The water sticks to its tongue and a mini-stream subsequently shoots up into its mouth thanks to the power of adhesion and cohesion, respectively.  The cat will then close its mouth at exactly the precise moment where the most water will be in its mouth, just before gravity starts to pull it down.

Here’s a video of a cat drinking milk to help you understand what’s happening:

They move their tongue at blazing fast speeds of 3 feet per second which allows the average house cat to make FOUR of these mini-streams per second.  All the other cats such as jaguars, tigers, lions, bobcats, cheetahs and leopards follow this same technique as well.  The only difference is that the largest cats, such as the lions, do it slightly slower at about two times per second which allows their larger tongues to get more water.

When this information came out, it was thought that this technique was unique to cats because dogs seemed to be much more sloppy. In 2011 however, researchers in Harvard used high speed photography and confirmed that dogs drink water using the same method as cats as well.  The difference is that dogs carelessly plunge their tongues completely into the water which is why there is so much more splashing occurring.

See how a dog drinks water in a similar fashion, but with a lot less finesse:

It’s almost as if cats have an instinctive understanding of fluid mechanics to be able to take the biggest sips the fastest way possible.  This is great news for those who believe their cats are actually geniuses trapped in super-agile-bodies.  This may also be a nerdy turn on for the fluid dynamics scientists.  Infinitely more so if they are cat lovers as well.

Since this article about animals drinking water, I’ll leave you with this captioned picture about how some pigeons have figured out how to get water out of a fountain.  Oh and by the way, did you know pigeons are one of the smartest birds in the world?

Looking for a simple and straightforward bodyweight-oriented strength training routine that doesn't take too much time? You're not the only one! A survey I … END_OF_DOCUMENT_TOKEN_TO_BE_REPLACED

For those who have poor flexibility, tight hamstrings and want a simple program that will help them to get looser in a gentle, non-painful manner. In this … END_OF_DOCUMENT_TOKEN_TO_BE_REPLACED

In this day and age most people are working from home and struggling to find the balance between stagnation and moving to stay fit. This program was developed … END_OF_DOCUMENT_TOKEN_TO_BE_REPLACED

This training routine is focused largely on increasing strength and muscle mass (aka muscular hypertrophy). If I had to sum up the routine in one fell swoop I … END_OF_DOCUMENT_TOKEN_TO_BE_REPLACED

I don't know about you but nothing gets me fired up more than working on my abs. It's a unique muscle group that is utilized in every exercise and making it … END_OF_DOCUMENT_TOKEN_TO_BE_REPLACED

For anyone who wants better shoulder health, shoulder flexibility, a looser upper back and improved posture, this program takes all the guess work out of it to … END_OF_DOCUMENT_TOKEN_TO_BE_REPLACED

This is for anybody who wants to get strong and have fun with a gymnastics-inspired routine. It is highly bodyweight-exercise oriented (no external weights) and … END_OF_DOCUMENT_TOKEN_TO_BE_REPLACED

I've created this hip flexibility program for those that would like to improve their flexibility in an efficient manner, with a follow along video that only … END_OF_DOCUMENT_TOKEN_TO_BE_REPLACED