Hello dear readers. This major purpose of this post it to break the writers block and paralysis that has consumed me as of late. My thoughts will be all over the place, which is good, cause variety is good. Treat this as a stream of consciousness style post, the practice of which is to help my thoughts flow, to share what is going on internally inside me and to possibly reignite the flame as a writer.

The evolution of content-creation

When I first started this website, I posted anything and everything that came to mind without any hesitation or fear of criticism. A lot of content in the first year were very short, low-effort posts. Posts just for the sake of posting. They were completely random. Sometimes it would just be a funny image (or 10)… sometimes they were deep reflections and so on. There was no YouTube channel back then.

Eventually, the posts started to get more refined. I started to make blog posts with thousands of words in length. I started the YouTube channel and now all of a sudden, I had a way to share information with video. I started with a little camera and was editing using Windows Media Movie Maker.  The quality was complete shit as I had no idea what I was doing, but the only way to get it better was to keep doing it.

At one point I had a good balance between creating blog posts and videos, but it was a great struggle to maintain that. Fast forward a couple more years and my focus has been on video-creation and I feel I’ve neglected my blogging behind far more than I like. I like to write, I like to type, share my thoughts, yet I am not doing it much.

Part of the problem is that I always need to one-up myself and the massive compendiums that I’ve created in the past were so lengthy and thorough, that I feel that is the standard I should up-keep… and inspiration to create such a massive article doesn’t always come. 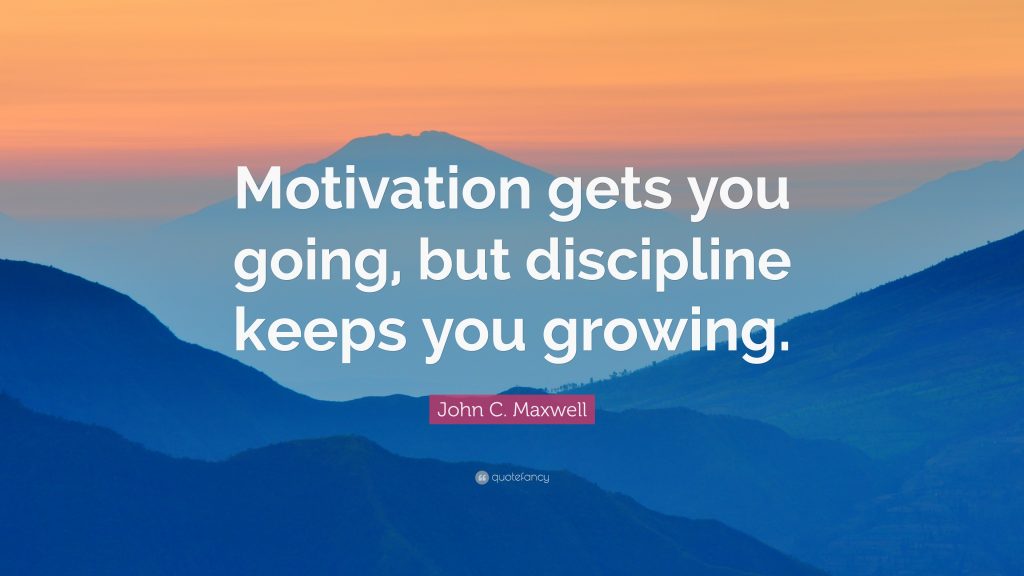 What helps me tremendously is to make a to-do list and prioritize it and do the thing I have most resistance to doing, first. So even though the motivation to do the thing that requires creativity is not there… if I simply “fake it till I make it” by diverting attention to the task at hand, it actually works. I might not necessarily enjoy doing so initially, but I do enjoy it eventually because the reward of having been productive, especially towards something I had a lot of resistance to doing.

By the way, I created a video series on these topics earlier this year, in case you missed it:

Now, the problem with forcing this motivation through discipline is that my work requires creativity. And doing creative work without the actual inspiration feels extremely dull and sometimes impossible. But the alternative (not doing anything) is worse.

Fractured attention… Spreading myself too thin

I avoided having an Instagram account for years, and I think I had better focus since I had less social media to post to and content was going to be funneled to very few platforms. (And now that IG created “IGTV” to rival YouTube, there’s even more potential fracturing, but ultimately I’m going to continue my focus on YouTube because ain’t nobody got time for making horizontal and vertical videos.)

A couple months ago I made a video-update where I shared that I was busy moving and that’s why I wasn’t posting for those past couple weeks. This move was quite a big change in my life because my girlfriend and I moved into a new place together. (I have never lived with a significant other before and this is quite a divine experience, by the way.) The move overall has been smooth but it took me a good month to get into the groove of being able to do things efficiently again, as well as visiting the beach.

Also, despite exposing myself publicly a lot, I do tend to prefer to keep my life somewhat private. I want to share what I’m doing with my life, but not so much so like those vloggers do where they are literally just taking video of themselves going throughout their day, everyday. (Unfortunately, for me, people love watching that kind of stuff because it’s mindless, easy to digest, gives insight into another persons life and helps people to connect with them.) But then you have no privacy and the question then is: What are you sharing, really? I like to share things that will help lift others up, so I’m not going to just share myself going to the market or going about my day for no reason other than to share myself as if I’m some sort of celebrity.

One of my biggest dreams was to be really good at partner dancing but I never thought I’d be able to be good at it, ever. But I was inspired because my girlfriend is a good dancer, but I’m not, but to help her be that dancer, I need to lead her… so I took a bunch of salsa classes on my own for a few weeks.

At first I thought it was impossible to learn all these moves and figure out combinations and all that because it’s so complex. (Dance is the ultimate in movement complexity and skill work.) Turns out, it’s very common for men to suck really hard at dancing for a long time (because they have to lead and essentially think for two people) and woman start out naturally more capable. But as this chart below shows, if I pass this “beginners hell” stage, when enough things click and neural patterns get established where things become automatic, my abilities will eventually accelerate exponentially and I will surpass the lady in ability. 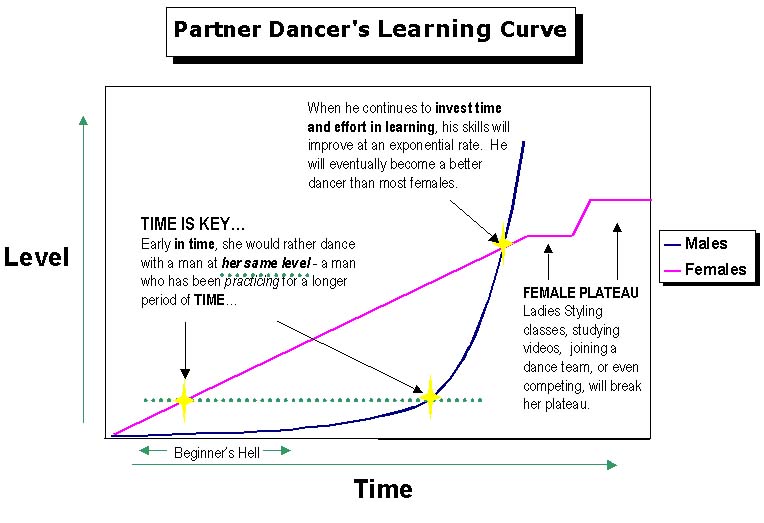 Front Lever, I’m coming for you!

For the first month in my new apartment, since I didn’t have as much beach time and had just a pull up bar and rings at home, I mostly kept practicing the front-lever obsessively because it’s one of my dream goals.

I cannot hold a full FL with straight legs, but I can do so with one leg tucked at the moment. And I keep practicing this single-leg front lever repeatedly (casually, grease the groove style throughout the week) and can now, far more easily do a few pulls into it from dead hang, and also up to inverted hang which was not possible before the move. It’s been really good just focusing on one move repeatedly over and over. I never feel exhausted or over-spent and can keep training daily.

I first started playing around with the front lever years ago but never had a strict regiment toward training only that. It was also always very demoralizing with how difficult it always felt, especially for my giant bicycling thighs/butt and long legs which make it harder.

Height makes a huge difference for levers. To put it into perspective, some people who are 5’4 or lower didn’t even need to train for it directly to achieve it. And then you have people like Lachlan Walker who is an absolute beast but he’s 6’2 and I haven’t seem him a full front lever. Even Yuri Van Gelder, who is a world champion gymnast, doesn’t even include it in his routine as it takes away too much energy for his other moves. So, the move can be exponentially harder for those that are mechanically disadvantaged.

But you know, the fact that I’m not short has been a blessing in disguise because while progress is slower with bodyweight exercises (and it takes a lot more muscle mass to look aesthetically buff compared to my shorter brethren), this has allowed me to become very well acquainted with which exercises are the most effective at every level and which ones are a waste of time. People who are very short and progressed toward the final move with minimal challenges or requiring intermediary progressions to help bridge the gap are more out of touch with being able to teach the move to those who have trouble. So all in all, the extra challenge makes me a better teacher ultimately and that’s great, cause I love teaching.

I’ll leave that with my final point. I always try to look at issues and problems as blessings in disguise, because otherwise life would be too drab and dark. For example, I found a place to live in an amazing home for a really affordable price several months ago but was annoyed that the landlord didn’t want me there. So I was really sad that it didn’t work out. But then fast forward a lot more time and instead of me moving to someplace alone, my girlfriend needed to move out as well, and we ended up finding a place together. So the rejection of the “amazing home” was actually a blessing in disguise. I think of almost all scenarios like this because your perspective is everything. Perspective creates perception, perception creates belief, and belief creates experience. So I try to find the silver lining to everything. And with that, I bid you adieu.

No wait, before I leave… I’ll just say a quick spiel about what’s coming up to keep you in the loop and to keep me accountable. I have a lot of projects in the works right now. A nutrition blog+video series. A self-developmental blog+video series. A small video on how I take care of my dog Medax since I’ve had her for 15+ years. As well as working on a hip-flexibility program since the hamstring-flexibility program is a great success. With that said, I hope that I have broken the curse of not having generated any in-depth blog posts for a long time.

I don't know about you but nothing gets me fired up more than working on my abs. It's a unique muscle group that is utilized in every exercise and making it … END_OF_DOCUMENT_TOKEN_TO_BE_REPLACED

For anyone who wants better shoulder health, shoulder flexibility, a looser upper back and improved posture, this program takes all the guess work out of it to … END_OF_DOCUMENT_TOKEN_TO_BE_REPLACED

I've created this hip flexibility program for those that would like to improve their flexibility in an efficient manner, with a follow along video that only … END_OF_DOCUMENT_TOKEN_TO_BE_REPLACED

I have three premium flexibility programs that I offer and many of you have been clamoring for a bundle-package, so here it is! You could now buy the … END_OF_DOCUMENT_TOKEN_TO_BE_REPLACED

This training routine is focused largely on increasing strength and muscle mass (aka muscular hypertrophy). If I had to sum up the routine in one fell swoop I … END_OF_DOCUMENT_TOKEN_TO_BE_REPLACED

For those who have poor flexibility, tight hamstrings and want a simple program that will help them to get looser in a gentle, non-painful manner. In this … END_OF_DOCUMENT_TOKEN_TO_BE_REPLACED

This is for anybody who wants to get strong and have fun with a gymnastics-inspired routine. It is highly bodyweight-exercise oriented (no external weights) and … END_OF_DOCUMENT_TOKEN_TO_BE_REPLACED

Looking for a simple and straightforward bodyweight-oriented strength training routine that doesn't take too much time? You're not the only one! A survey I … END_OF_DOCUMENT_TOKEN_TO_BE_REPLACED