Take a good look at the length of these swimsuits.  WHY are they so long? 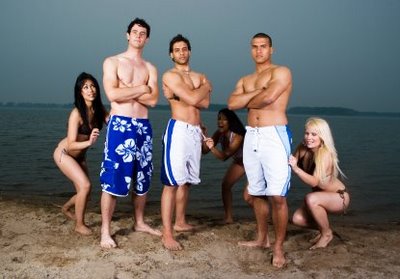 They might as well be wearing PANTS for christ sakes.

What is wrong with everybody wearing these extremely long shorts?  What is it?  People don’t feel comfortable?  Is everyone embarrassed because they have thighs?  Is it because everyone is really fat? (Maybe that’s it, fat thighs.)

I guess they’re great if they also have pockets with zippers… then at least you could hold stuff… but then again, if that was the case then why buy swim shorts?  You could just swim with your cargo pants and nobody would know the difference.

I understand that board shorts were created originally for SURFERS (the sticky wax on a surfboard can get caught to your hair).  But this trend obviously went well beyond surfers to the masses.

Is it because board shorts say BUM (like a beach bum, in tune with the surfer/stoner lifestyle of SoCal)?

Is it because speedo’s say slim, sleek and athletic and the vast majority of people are WAY too unhealthy to be that?

When mens swimsuits are short, like they should be, being in the water feels so much more awesome.  If you swim even a little, the experience is much more liberating.  The water feels much smoother around you when there’s no drag created from all the extra material.  It also feels much more efficient if you want to swim for exercise.  Everything about them FEELS better.

Trying to find a new swimsuit that is of normal length (normal to ME) is very difficult, the shorts are always like 8 inches too long, WTF!

Does anybody else think this is a strange fashion?  Even when I look at professional basketball players, their shorts go well below their knee, how ridiculous is that?  Anyone with half a brain knows it’s more comfortable to exercise when the shorts are actually short, whether you’re in the water or not!

But do you really wanna know the SADDEST part of all this?

If you are wearing shorts that are shorter than board shorts, a lot of people will think you are GAY.

What the hell?  That’s so sad.  Really sad.  The culture here in SoCal is such that if  you’re wearing short shorts/speedos AT THE BEACH, you might be considered gay!

I recently visited Playa Del Carmen, Mexico and I was not expecting to see as many board shorts because there are tourists from all over the world.  But unfortunately the vast majority were wearing these long shorts as well. 🙁 Only certain tourists, like the Italians, were consistently wearing speedo-type shorts.

I think the board shorts have taken over for 2 reasons:

1. The majority of the population are either overweight or obese and therefore too embarrassed to reveal too much of their skin.

2. A lot of the MEN in this country are actually pussies.  Not man enough, too scared, too insecure to show their god damn THIGHS.  If George Carlin was here, he’d probably classify this under “the continual pussification of the American male.”

And while I’m on this fashion rant, I’ll just throw in there that I don’t like seeing people wear their pants below their ass.  If that’s not the epitome of TRASHY, then I don’t know what is.

Anyway, I just wanted to get that off my chest.

Looking for a simple and straightforward bodyweight-oriented strength training routine that doesn't take too much time? You're not the only one! A survey I … END_OF_DOCUMENT_TOKEN_TO_BE_REPLACED

In this day and age most people are working from home and struggling to find the balance between stagnation and moving to stay fit. This program was developed … END_OF_DOCUMENT_TOKEN_TO_BE_REPLACED

I have three premium flexibility programs that I offer and many of you have been clamoring for a bundle-package, so here it is! You could now buy the … END_OF_DOCUMENT_TOKEN_TO_BE_REPLACED

For anyone who wants better shoulder health, shoulder flexibility, a looser upper back and improved posture, this program takes all the guess work out of it to … END_OF_DOCUMENT_TOKEN_TO_BE_REPLACED

I don't know about you but nothing gets me fired up more than working on my abs. It's a unique muscle group that is utilized in every exercise and making it … END_OF_DOCUMENT_TOKEN_TO_BE_REPLACED

I've created this hip flexibility program for those that would like to improve their flexibility in an efficient manner, with a follow along video that only … END_OF_DOCUMENT_TOKEN_TO_BE_REPLACED

For those who have poor flexibility, tight hamstrings and want a simple program that will help them to get looser in a gentle, non-painful manner. In this … END_OF_DOCUMENT_TOKEN_TO_BE_REPLACED

This training routine is focused largely on increasing strength and muscle mass (aka muscular hypertrophy). If I had to sum up the routine in one fell swoop I … END_OF_DOCUMENT_TOKEN_TO_BE_REPLACED