Tablet:  A compressed drug with fillers, binders, and coloring agent.  The fillers, binders and colors are supposed to be inert.  We rarely find a patient that is allergic to something that is inert.  Once a color is found to have an allergic reaction, it is no longer allowed to be used. 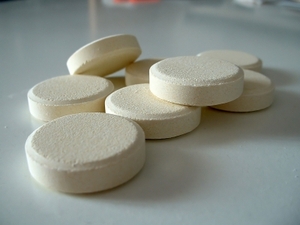 Hard Capsule:  A drug inside a drug that has two ends in it and the drug and filler are in it.  You can’t find anymore hard capsules over the counter.  You can’t open up the ends of OTC drugs anymore.  Why?  Because of some maniac in the 80’s in the Seattle area that tampered with Tylenol capsules.  This asshole decided to buy Tylenol, take it home, open all the capsules, pour the powder out, add some cyanide to it, refill it back in the capsules, repack the capsules in the package, put it back in the box, then take it back to the store and put it on the shelf.  A few people died from this and the guy was never caught.  As a result the first thing we did was add legislation that made shrink-wrap mandatory.  That’s why the label says if the plastic is missing or tampered with, don’t use this product! 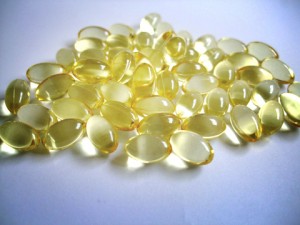 Enteric Coated means it cannot be dissolved in acidic media.  There is an extra coating on the outside of the tablet and it won’t dissolve in an acidic environment, which is our stomach.  It simply passes through the stomach but this coating will dissolve in an alkaline/basic environment, which is the intestinal tract.  The outer coating dissolves, releases the drug and the drug gets absorbed in the intestinal tract.  We do this to protect the stomach from getting ulcers.  Baby aspirin is something some people need to take everyday which is an anticoagulant.  Some aspirins, for this reason, are enteric coated, in case people are prone to getting ulcers.  Some drugs are also destroyed by acid, so it won’t work if it is destroyed in the stomach. 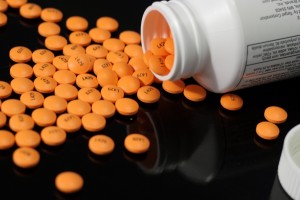 Prolonged Action/Sustained release:  These were a major breakthrough in healthcare.  Drugs are normally dosed based on their half-life.  Before sustained release drugs were available, there were some drugs where people had to take a drug every 4 hours, even if it was at 2am or 6am, so you could imagine, compliance wasn’t great with these drugs.

There’s several ways of how sustained release is done.  A capsule may have beads inside it and each bead might be a different color such as blue, yellow, green, red.  A yellow one would have one coating, the green might have 2 coatings, and the red might have 3 coatings.  With enough time, the outer coating is destroyed, causing the release of the drug.  The yellow one would dissolve first (1 coating), then the green (2 coats), then the red (3 coats).  This way, instead of having to take a dose every 4 hours, it might be taken only once a day or twice a day, depending on the release mechanism.  The less often they have to take it everyday, the more likely they’ll take it at the right time.

Another way this effect is achieved is if you have a tablet that’s made of a wax matrix with microscopic holes with the drug inside.  This wax matrix is indigestible.  As the drug is going through the intestinal tract, the drug is leeching out slowly and getting absorbed.  What’s the patient going to complain about afterwards?  They’ll see the wax matrix come out of them even if the drug is absorbed and think it wasn’t absorbed at all.

Syrup: Sugar in water solution.  What can you think of that comes in syrup form?  Cough syrups!  How many of you can think of a good tasting cough syrup?  It’s tough to come up with something that’s really good tasting, especially for the children.  Imagine what that cough syrup would taste like if you didn’t sugar it.

Elixir: An elixir is a hydroalcoholic solution.  That means we have some alcohol in there and a drug.  Why use alcohol?  To dissolve it!  Some drugs are not water soluble and won’t dissolve in water, so the next option is alcohol.  Other reasons to do it is the additive/potentiation effect of sedation or analgesia.

What group of individuals can never, ever get an elixir?  Alcoholics.

Suspension: These are particles suspended in solution and don’t dissolve.  All we could do is suspend it by shaking it.  When we make it into a liquid, the particles are settled on the bottom.  It’s usually 10-14 days until these type of drugs expire.

For anyone who wants better shoulder health, shoulder flexibility, a looser upper back and improved posture, this program takes all the guess work out of it to … END_OF_DOCUMENT_TOKEN_TO_BE_REPLACED

This training routine is focused largely on increasing strength and muscle mass (aka muscular hypertrophy). If I had to sum up the routine in one fell swoop I … END_OF_DOCUMENT_TOKEN_TO_BE_REPLACED

In this day and age most people are working from home and struggling to find the balance between stagnation and moving to stay fit. This program was developed … END_OF_DOCUMENT_TOKEN_TO_BE_REPLACED

Looking for a simple and straightforward bodyweight-oriented strength training routine that doesn't take too much time? You're not the only one! A survey I … END_OF_DOCUMENT_TOKEN_TO_BE_REPLACED

I have three premium flexibility programs that I offer and many of you have been clamoring for a bundle-package, so here it is! You could now buy the … END_OF_DOCUMENT_TOKEN_TO_BE_REPLACED

I've created this hip flexibility program for those that would like to improve their flexibility in an efficient manner, with a follow along video that only … END_OF_DOCUMENT_TOKEN_TO_BE_REPLACED

I don't know about you but nothing gets me fired up more than working on my abs. It's a unique muscle group that is utilized in every exercise and making it … END_OF_DOCUMENT_TOKEN_TO_BE_REPLACED

This is for anybody who wants to get strong and have fun with a gymnastics-inspired routine. It is highly bodyweight-exercise oriented (no external weights) and … END_OF_DOCUMENT_TOKEN_TO_BE_REPLACED