“There is nothing to fear but fear itself.”
~ Franklin D. Roosevelt ~

I’ve been flabbergasted by the number of people who are making status updates saying how they are genuinely scared ever since the bombings.  Scared to go outside.  Scared to go in big crowds.  Scared to ride their bicycle at CicLAvia this Sunday.  Why? Because two bombs exploded in Boston?  You guys need a reality check.

Honestly, the news doesn’t phase me when it comes to these events. Not because I have no feelings, but because it’s fucking ridiculous if I start to let things that are out of my control, start to control me.  I’m not saying your fears aren’t real. Phobias are very real to people who have them, no matter how irrational they may seem to those that don’t.

But seriously? There’s bombings EVERY DAY in the middle east where civilians are dying tragic deaths.

There were at least 33 killed and more than 160 wounded in Iraq on the same day as the Boston bombings.  Seven car bombs and three roadside bombs amongst seven Iraqi cities.  For March 2013 alone, 217 people died in Iraq from these types of attacks.

Why is it that that bit of news was never scaring you?  Was it because it wasn’t on US soil?  Are the lives of American civilians somehow more precious?  Of course not. People are people no matter where they live and terrorism is rampant and has ALWAYS been rampant and it sucks that it takes these random acts of violence on OUR OWN LAND for people to realize how terrible these things are.

But seriously.  Don’t be scared. Nothing is different.  What are you going to do?  Never run a marathon?  Never go outside?  Be grateful you don’t live in Israel or Syria or Iraq.  One bombing every ten years for the whole country is not the same as weekly bombings in the midst of sectarian violence.  Get a grip, people. 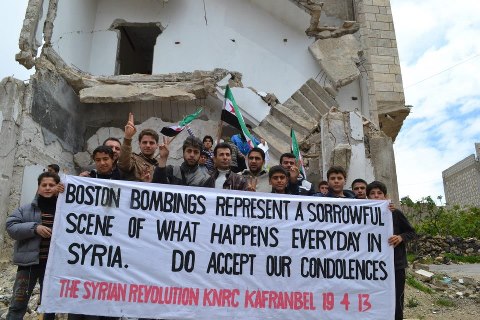 PS: I’m a very compassionate person and my heart goes out to those affected by the traumatic event.  I felt like I had to write this out because of all the people on Facebook talking about how afraid they are now.  Like seriously guys?  There’s nothing you can do to stop these kinds of things and terrorism is NOTHING new or shocking.  Just remember to live your life to the fullest because you never know when or how it’s going to end anyway.

“Pick the day. Enjoy it – to the hilt.
The day as it comes. People as they come…
The past, I think, has helped me appreciate the present.
And I don’t want to spoil any of it by fretting about the future.”

For those who have poor flexibility, tight hamstrings and want a simple program that will help them to get looser in a gentle, non-painful manner. In this … END_OF_DOCUMENT_TOKEN_TO_BE_REPLACED

This training routine is focused largely on increasing strength and muscle mass (aka muscular hypertrophy). If I had to sum up the routine in one fell swoop I … END_OF_DOCUMENT_TOKEN_TO_BE_REPLACED

I've created this hip flexibility program for those that would like to improve their flexibility in an efficient manner, with a follow along video that only … END_OF_DOCUMENT_TOKEN_TO_BE_REPLACED

I have three premium flexibility programs that I offer and many of you have been clamoring for a bundle-package, so here it is! You could now buy the … END_OF_DOCUMENT_TOKEN_TO_BE_REPLACED

Looking for a simple and straightforward bodyweight-oriented strength training routine that doesn't take too much time? You're not the only one! A survey I … END_OF_DOCUMENT_TOKEN_TO_BE_REPLACED

In this day and age most people are working from home and struggling to find the balance between stagnation and moving to stay fit. This program was developed … END_OF_DOCUMENT_TOKEN_TO_BE_REPLACED

For anyone who wants better shoulder health, shoulder flexibility, a looser upper back and improved posture, this program takes all the guess work out of it to … END_OF_DOCUMENT_TOKEN_TO_BE_REPLACED

I don't know about you but nothing gets me fired up more than working on my abs. It's a unique muscle group that is utilized in every exercise and making it … END_OF_DOCUMENT_TOKEN_TO_BE_REPLACED