There is no known function for any of these traits and nobody is better than another in anyway for having or not having these traits, but it’s cool info anyway. 🙂

Pigmented iris: If a person is homozygous recessive for eye color, there is no pigment in the front part of the eyes, and the blue color of the back of the iris shows through, giving blue eyes.  Other genes determine the nature and density of the pigment, giving us brown, hazel, violet, green and other eye colors.

Attached earlobe: If a person i

s homozygous recessive for this trait, the earlobes attach directly to the head and do not hang free.  Other genes can influence this trait, so there is considerable variation in the size and appearance of earlobes.

Thumb placement: Interlock your fingers.  Do this quickly, without conscious effort.  Positioning the left thumb on top of the right one is due to a dominant allele.  Try reversing the positioning of your thumbs.  Which way feels more comfortable?

Arm placement: Ford your arms across your chest.  Positioning the left arm on top of the right is due to a dominant allele.  Try reversing the position, just like with the thumb placement, which feels more comfortable? 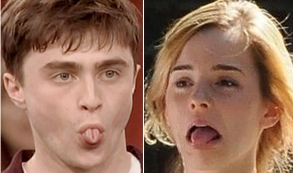 A dominant allele enables some people to roll their tongues into a distinct U-shape. (Recent studies have shown this tongue-rolling could be dependent on multiple genes)

Widow’s peak: A dominant allele causes the hairline to form a V-shaped point in the middle of the forehead.  A person who is homozygous recessive has a straight hair line.

Index finger shorter than ring finger: Place your hand on a flat surface and note whether the index (2nd finger, counting the thumb as number one) finger is shorter than the ring (4th) finger.  The expression of this gene is sex influenced.  The phenotype is usually dominant in males and recessive in females.

Hitchhiker’s Thumb: The distal (last) joint of the thumb can be bent back to form a 45 degree angle with the proximal joint (attached to your hand) if you are homozygous recessive for this trait.  This genotype may produce only slightly bent thumbs (or only one thumb bent).  This sort of variation in the degree of expression of a gene is termed expressivity.

Middigital hairs: Some people have hair(s) on the second or middle joint of their fingers.  Presence of hair results from a dominant allele.  Separate dominant alleles control the hair of each finger.

In our cells we have homologous chromosomes, which means a pair of chromosomes.  Half of the genetic material comes from the mother and the other half from the father.

If two people that carry the genetics for blue eyes (a recessive gene), their baby that has blue eyes will have a homozygous recessive genotype (genetic makeup) for their eye-color.

Homozygous: Homo means “the same,” and zygote means “to join.”  Homozygous means the baby’s pairs of chromosomes both have the same gene, therefore they are homozygous for eye color and “homozygous-recessive” if they are both the recessive allele’s (genes).  And of course, homozygous-dominant if the pair of genes are both dominant.

Heterozygous means they have different genes (one is recessive and one is dominant).  A person that carries both the dominant and recessive gene is heterozygous dominant, and the phenotype (the expression of the gene) will only show the dominant trait (that’s why it’s dominant.)

Well I hope that was interesting. 🙂

Do you have questions in regards to your training, diet or habits in general? I bet you do because I get messages every single day from people looking for … END_OF_DOCUMENT_TOKEN_TO_BE_REPLACED

Looking for a simple and straightforward bodyweight-oriented strength training routine that doesn't take too much time? You're not the only one! A survey I … END_OF_DOCUMENT_TOKEN_TO_BE_REPLACED

In this day and age most people are working from home and struggling to find the balance between stagnation and moving to stay fit. This program was developed … END_OF_DOCUMENT_TOKEN_TO_BE_REPLACED

I have three premium flexibility programs that I offer and many of you have been clamoring for a bundle-package, so here it is! You could now buy the … END_OF_DOCUMENT_TOKEN_TO_BE_REPLACED

For anyone who wants better shoulder health, shoulder flexibility, a looser upper back and improved posture, this program takes all the guess work out of it to … END_OF_DOCUMENT_TOKEN_TO_BE_REPLACED

I don't know about you but nothing gets me fired up more than working on my abs. It's a unique muscle group that is utilized in every exercise and making it … END_OF_DOCUMENT_TOKEN_TO_BE_REPLACED

I've created this hip flexibility program for those that would like to improve their flexibility in an efficient manner, with a follow along video that only … END_OF_DOCUMENT_TOKEN_TO_BE_REPLACED

For those who have poor flexibility, tight hamstrings and want a simple program that will help them to get looser in a gentle, non-painful manner. In this … END_OF_DOCUMENT_TOKEN_TO_BE_REPLACED