The photon’s energy would be associated with its frequency (nu), through a proportionality constant known as Planck’s constant (h), or alternately, using the wavelength (lambda) and the speed of light (c):

Since the frequency ν, wavelength λ, and speed of light c are related by c = λν, the Planck relation can also be expressed as:

4. Electron spin: There’s 2 e- per orbital but to do that they have to have opposite spins. ^ or v

As you add shells, they move further away from the nucleus but each shells moves less further away with each subsequent shell.  The shortest wavelength has the highest energy.  And the valence e- are the ones in the outer shell. 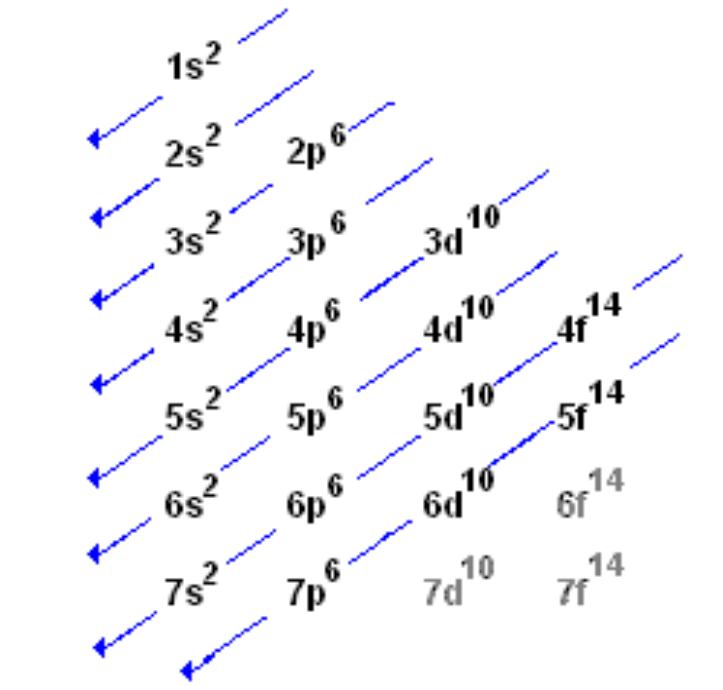 Transitional metals have similar properties because their e- configuration is similar.

The largest atoms are on the bottom left while the smallest are on the top right because as the atomic number increases, the protons also increase, and the protons pull the electrons harder inward.

I have three premium flexibility programs that I offer and many of you have been clamoring for a bundle-package, so here it is! You could now buy the … END_OF_DOCUMENT_TOKEN_TO_BE_REPLACED

For anyone who wants better shoulder health, shoulder flexibility, a looser upper back and improved posture, this program takes all the guess work out of it to … END_OF_DOCUMENT_TOKEN_TO_BE_REPLACED

I don't know about you but nothing gets me fired up more than working on my abs. It's a unique muscle group that is utilized in every exercise and making it … END_OF_DOCUMENT_TOKEN_TO_BE_REPLACED

I've created this hip flexibility program for those that would like to improve their flexibility in an efficient manner, with a follow along video that only … END_OF_DOCUMENT_TOKEN_TO_BE_REPLACED

For those who have poor flexibility, tight hamstrings and want a simple program that will help them to get looser in a gentle, non-painful manner. In this … END_OF_DOCUMENT_TOKEN_TO_BE_REPLACED

This training routine is focused largely on increasing strength and muscle mass (aka muscular hypertrophy). If I had to sum up the routine in one fell swoop I … END_OF_DOCUMENT_TOKEN_TO_BE_REPLACED

Hello 👋 my name is Antranik and my passion is teaching people how to get healthy, flexible and strong!