Let’s use an analogy here.  If a guy ejaculates, you gotta wait a little bit before he could do it again.  How long does it take to recover from one orgasm before he could do it again?  If he’s 16 years old, it might take 30 seconds.  In a 90 year old it might take several months.  This is called the refractory or recovery period between one orgasm to another.  Some woman could experience multiple orgasms but that’s not really possible with guys.  Muscle and nerve cells (excitable cells) need some time to recover before they do it again.

The electrical refractory (recovery) period (R.P.) is the period of time following an Action Potential when the cell will not respond to another stimulus. 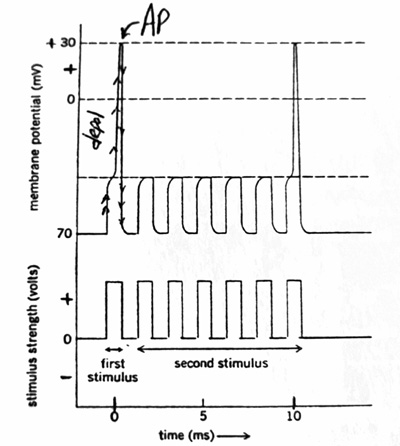 On the right, we have time going by on the x-axis in milliseconds.  On the y-axis is the voltage on the membrane of the cells.  We have the first stimulation of the cell and we see depolarization occur. We immediately stimulate it again and and what is generated is not an action potential.  The definition of an AP is a reversal of its polarity.  In this case the mV is going from -70 to -50 but it’s not positive.  If you keep stimulating it, it will not make another action potential until the sixth time.  This is suggesting that this cell needed some time to recover before doing another AP.  That’s because the Na+/K+ ATP pump is working.  How long does this refractory period take?  Look at the graph.  It’s about 10milliseconds.  It’s not like half an hour or a couple days.  It’s just at 10 milliseconds.

Why is the Refractory Period important to know?

The length of the cells electrical R.P. determines the maximum frequency of AP’s it can generate.  In this nerve cell, it can generate about 1 AP every 10 milliseconds.  Can we figure out how many AP’s that would be in a second?

Electrical Refractory Period of the Heart

Remember everything pertaining to nerve cells includes all muscle cells since they are excitable as well, including cardiac muscle.  The non-pacemaker heart cells have a refractory period of 3/10ths of a second.  So if one second is a thousand milliseconds, how many milliseconds is that refractory period?  That’s 0.3 * 1000, so that’s 300 msec.  Heart cells have recovery times of 300msec, which is much longer than what we just said about nerve cells having a 10msec RP.

Can we figure out the theoretical maximal heart rate?

Do you have questions in regards to your training, diet or habits in general? I bet you do because I get messages every single day from people looking for … END_OF_DOCUMENT_TOKEN_TO_BE_REPLACED

Looking for a simple and straightforward bodyweight-oriented strength training routine that doesn't take too much time? You're not the only one! A survey I … END_OF_DOCUMENT_TOKEN_TO_BE_REPLACED

In this day and age most people are working from home and struggling to find the balance between stagnation and moving to stay fit. This program was developed … END_OF_DOCUMENT_TOKEN_TO_BE_REPLACED

I have three premium flexibility programs that I offer and many of you have been clamoring for a bundle-package, so here it is! You could now buy the … END_OF_DOCUMENT_TOKEN_TO_BE_REPLACED

For anyone who wants better shoulder health, shoulder flexibility, a looser upper back and improved posture, this program takes all the guess work out of it to … END_OF_DOCUMENT_TOKEN_TO_BE_REPLACED

I don't know about you but nothing gets me fired up more than working on my abs. It's a unique muscle group that is utilized in every exercise and making it … END_OF_DOCUMENT_TOKEN_TO_BE_REPLACED

I've created this hip flexibility program for those that would like to improve their flexibility in an efficient manner, with a follow along video that only … END_OF_DOCUMENT_TOKEN_TO_BE_REPLACED

For those who have poor flexibility, tight hamstrings and want a simple program that will help them to get looser in a gentle, non-painful manner. In this … END_OF_DOCUMENT_TOKEN_TO_BE_REPLACED